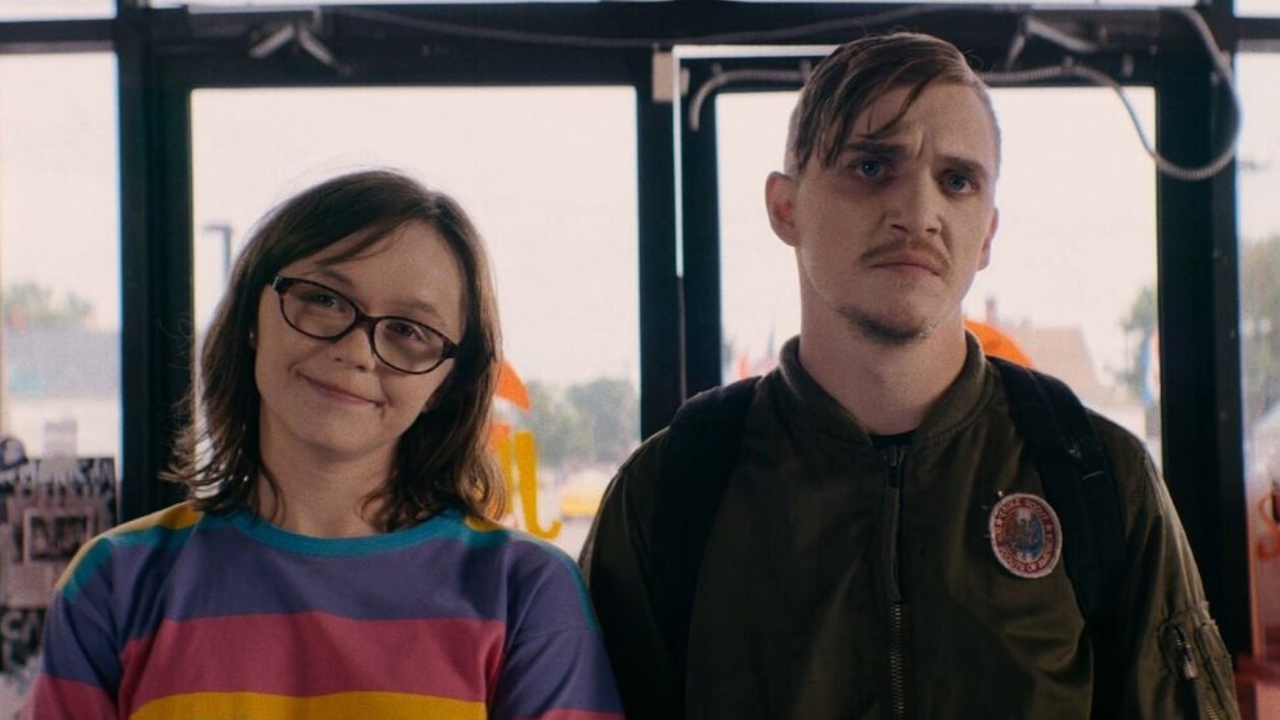 ‘It’s just too bad you have to go to prison to get a decent dinner in America’, quietly proclaims one of the lead characters in Adam Rehmeier’s unapologetically brash punk rock dramedy, Dinner in America. Serving as both a scathing critique of the American ethos and an incongruously tender rom-com, this Ben Stiller-produced festival darling is a rapturous medley of anarchistic love and unadulterated 90s punk energy that proudly wears its profane heart on a grubby, ripped sleeve.

Admittedly, the first act of this unconventional love story is something much more akin to an edgy 90s teen’s wet dream: punk singer Simon (Kyle Gallner), stuck between his band’s dedication to “selling out” and a $5000 police warrant, flees law enforcement pursuit after Patty (Emily Skeggs), a hardcore superfan of Simon’s band, charitably offers him a place to stay. But here’s the deal: Simon’s punk alias, John Q, is a balaclava-wearing, fire-starting warehouse nonconformist, whose real identity is known only to his fellow band members. Naturally, all of this leads to an explosive mix of Bonnie & Clyde-ish antics and radically aggressive coming-of-age quirks that are carefully diffused by the two delightfully unhinged leads.

Think Green Day’s “American Idiot” by way of Doom Generation, the Midwestern suburban world of Dinner in America is firmly stuck in the 90s: rampant homophobia, casual ableism and the issues of disenfranchised youth run wild across the land of the free. Mercifully, Rehmeier’s script doesn’t linger too much on the archaic slurs and white middle-class racism, instead jumping straight into the pyromaniacal anarchy of Simon and Patty’s delirious punk fanaticism. Gallner is stunning in the role, crafting the image of a rebellious enfant terrible with a heart of gold. At the same time, Skeggs’s assertive eccentricity lends itself incredulously well to a film where everybody is trying to out weird each other. It’s a bit of a stretch to say this is some kind of subversive manic pixie dream girl narrative, yet there’s a strong sense of parity and mutual delirium between the two leads that makes their malady infectious.

Expertly balanced tone leads to an intriguing blend of ideas that, frustratingly, never quite reach their full potential in Rehmeier’s script. The first act takes quite some time to set up an array of abrasive set pieces that serve minimal purpose to the central relationship, while the dissentient love story itself rushes to the home run in a span of minutes. Perhaps, this is just the limitations of the “subversiveness” at play here, but one could wish for some more time spent with genuine, vulnerable characters, as opposed to the riotous caricatures we meet in the beginning.

Dinner in America is the kind of bizarre coming-of-age comedy that vehemently earns its divisive response, purposefully alienating the audience before slowly injecting its touching sensibilities with a venomous bite. Anchored by two astonishing lead performances and assuredly truculent directing by Adam Rehmeier, Dinner in America defies American classism and the power elite with dashing immaturity and transgressive accuracy – very punk, indeed.