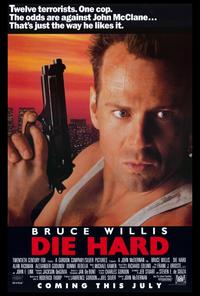 Bruce Willis stars as John McClane, the NYPD detective who just wants to visit his wife for the holidays. However as we all know, nothing is that simple in the land of Hollywood and with a title like Die Hard anyone expecting a cosy family affair would be sadly mistaken.

Upon his arrival to Nakatomi Plaza to meet his wife for her company’s Christmas party, McClane is freshening up in his wife’s room, all the while unaware of the of the events unfolding at the party. A group of terrorists led by the infamous Hans Gruber (Alan Rickman) crash the party, intent on breaking into the vault. Stopping at nothing to get to what they came for, including killing civilians and anyone else who gets in their way. McClane, with the help of Al, an LAPD police officer who gets caught up in the situation with the help of falling dead Germans…

Bruce Willis must have been an unlikely choice for this role, with the legacy of Stallone and Schwarzenegger very much in the making, Willis made McClane seem like an ordinary guy, which was the intention. An honest cop caught up in something much bigger than himself. Though it is McClane’s attitude, which gives him the bigger presence over the aforementioned names. Witty one liners and an unparalleled cockiness gives him personality. This is what you can’t help but love about Die Hard.

Hans Gruber brings a glorious originality to his stereotypical terrorist role; where we usually see a standard bad guy persona unravelled by the presence of a thorn in his side, Gruber breaks the mould. No ‘ I have captured you and therefore I shall tell you all the details of my master plan as there is no way you can possibly escape’ routine here. Gruber is smart, cunning and is fantastically portrayed by Alan Rickman. (Another opportunity to bring up the importance of casting in a movie- The idea may be solid, but pick the wrong style actor and good writing is about much use as a chocolate teapot)

The storyline is hardly a new frontier in filmmaking, lone gunman stands up against impossible odds, but the way in which it’s delivered gives the movie an edge. It’s not inspiring in a conventional way –by this I mean I don’t want to hang around skyscrapers with an MP5 and a bag full of C4 – yet it’s a completely typical action movie in the best possible sense and if you can see through the terrorists thick European accents you can still make out the underlying point of the film. One man against the odds, Seeing that as a teenage child it’s hard to find a film that keeps the attention as much as Die Hard manages to while still managing to in some crazy way become inspiring.

Perhaps I’m reading too much into it and that Die Hard really is just a man running round blowing things up, but a review of me saying ‘Die Hard=Good, things go boom’ doesn’t really make good reading. Die Hard will always been an influential film for most people my age and certainly made an impact that no other action film can compare to. 4 Oscar nominations and numerous plaudits for the Direction as well as Willis’ and Rickman’s performances, prove that Die Hard is actually much more than a run of the mill action film.
Die Hard is a true classic of the 80’s and while it may get older its presence will never die…hard.

The Hunchback of Notre Dame