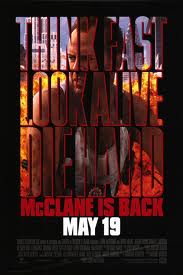 Twelve long years passed before John McClane (Bruce Willis) was caught in a situation worthy of the big screen again and boy, was it worth the wait. As the years have passed technology has of course advanced. A long time has passed since an audience was amazed at computers, pagers, fax machines and telephones on aeroplanes. There was no better way to show this progression than to begin the film, based on John Carlin’s article ‘Farewell In Arms’ with a bunch of geeks hacking into some kind of system (and one guy playing Gears of War). Unexpectedly, once they’re finished hacking, their computers explode, thus killing them.

This cuts to the hero, John McClane, dragging some guy out of a car who is making out with his (now grown up) daughter, Lucy (Mary Elizabeth Winstead). This leads to McClane and Lucy falling out (which appears to be a regular feature with females in his life) and she storms off stating her surname is that of her mother’s – Gennaro. After this, McClane is contacted and told the FBI wants him to pick up one of the remaining hackers named Matt Farrell (Justin Long). Whilst doing this, they are both attacked by an angry squad of henchmen. McClane, of course, wins the mini-battle and this leads to evil mastermind, Thomas Gabriel (Timothy Olyphant), finding out

Gabriel is some kind of uber geek who is ruining the world with his nerd skills by creating a ‘fire sale’ (causing havoc with the transport system, destroying the financial records and in turn, generating mass fear). In his frustration, he captures Lucy and threatens to kill her if McClane doesn’t kill Farrell. Instead of killing Farrell, McClane chases after Gabriel in hope to save his daughter and the world.

The narrative is definitely the most in depth of the Die Hard series and is something the audience can relate to. A real let-down with the film is the fact that it wasn’t released as an 18/R – I couldn’t help but feel that, because of this, the film lacked the aggression of its predecessors. Even McClane’s trademark “Yippee-ki-yay, motherfucker!” was cut down. Despite this, the screenplay was still solid and very comical – this was partly to do with the brilliant cast.

Willis of course gave another cracking performance in what I personally feel is his best film role. Olyphant’s character was utterly intimidating and totally insane. Who’d have thought the combination of Willis and Samuel L. Jackson could be rivalled? Definitely not me, but Long really stepped up his game for this film. Admittedly I’d only seen him in teen comedies before this and I wasn’t expecting much but his performance was tip-top. Winstead was the perfect replacement for her in-film mother, Holly Gennaro (Bonnie Bedelia). She mimicked the same fearless, independent, strong-woman character perfectly and I truly believed she was Gennaro’s daughter.

There were a lot of people wishing Die Hard had stayed as a trilogy. Personally, I think Die Hard is one of those series’ that the audience should expect the unreal to happen and it shouldn’t be taken too seriously. Let McClane get into as much trouble as he wants – it makes for a great action blockbuster.