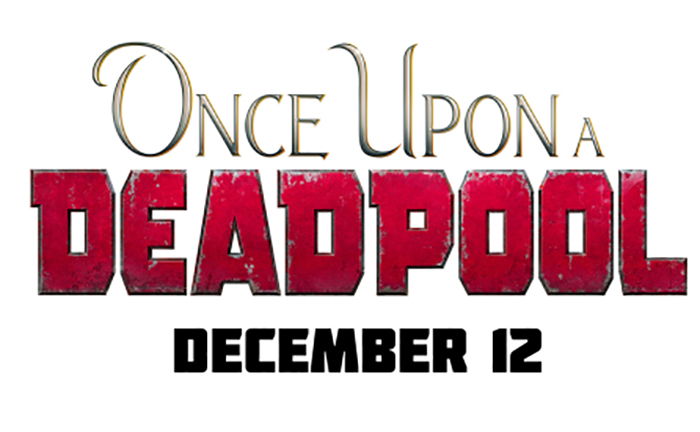 Deadpool 2 is set to become a delightful family Christmas film later this year, as it transforms into the charmingly-named Once Upon a Deadpool.

Okay, that’s not strictly true. The R-rated superhero feature, the highest-grossing adults-only flick of the year, will find itself re-released in time for the holidays as a PG-13 action flick, but for a good cause – $1 of every ticket sold will go to Arrow actor Stephen Amell’s charity ‘Fuck Cancer’, which in the spirit of Deadpool’s censorship will become ‘Fudge Cancer’ for the month of December.

“Fox has been asking for a PG-13 basically since the start in 2006,” star Ryan Reynolds told Deadline on Monday, “I’ve said no since 2006. Now, this one time, I said ‘Yes’ on two conditions. First, a portion of the proceeds had to go to charity. Second, I wanted to kidnap Fred Savage. The second condition took some explaining…”

With the non-stop swearing and gratuitous violence of the original feature, any censored version was always going to lose a vast chunk of its runtime. To fill in the gaps, Reynolds (along with writers Rhett Reese and Paul Wernick) filmed new segments with The Wonder Years star Fred Savage, as a framing device mirroring the similar sequences from storybook classic The Princess Bride (which starred Savage as a child actor). When asked about the sequences, Savage said: “While my participation in this film was anything but voluntary. I am happy to learn that Fudge Cancer will be the beneficiary of this shameless cash grab.”

Deadpool languished in development hell for a decade, as 20th Century Fox argued with Reynolds over the feasibility of a hard-R superhero franchise. After test footage leaked to the general public, a wave of fan support pushed the studio to take a gamble with a modestly-budgeted action feature, giving the film just $58 million to get made. Opening in February, 2016 Deadpool scored the highest debut for an R-rated film in Hollywood history with $135 million, and went on to finish its run with a staggering $783 million globally. In May, 2018 Deadpool 2 became the second-highest debut, with $125 million, and garnered an international haul of $734 million by the end of its run.

A hard-R re-released in a softer form is still something of an untested quantity in Hollywood, with the closest comparison being 1977’s hit Saturday Night Fever. Featuring liberal drug use and prominent sexual assault and abortion themes, it got slapped with a pretty understandable R-rating despite appealing to younger fans with a top-rated soundtrack. A PG version was later released in 1979, adding a cool $8.9 million to the film’s original $85.2 million cume.

Reynolds embraced the comparison for Once Upon A Deadpool, which releases on the 12th of December and will run until Christmas Eve, saying: “Eighty percent of Deadpool 3 takes place at a 1970’s disco so it only makes sense we’d find a connection to Saturday Night Fever. Plus, Deadpool loves Stayin’ Alive. It’s literally his only superpower.”

Moana Voice Actress Auli’i Cravalho: ‘Anyone’ Can Dress Up As Moana