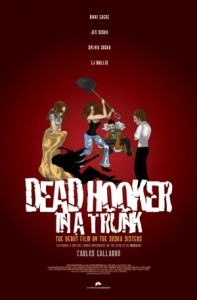 Twin Canadian filmmakers Jen and Sylvia Soska are the masterminds responsible for Dead Hooker In A Trunk, a free-wheeling, unapologetic exploitation joyride that was one of the funnest films I’ve seen this year.

I love exploitation films…quite often the title tells me everything I need to know about these movies. Women in Cages features…lots of women in cages. Hobo With A Shotgun focused on…a hobo with a shotgun. And, true to form,Dead Hooker In A Trunk comes correct with a dead hooker in a trunk.

The film centers around four friends who find, you guessed it, a dead hooker in their trunk, and attempt to dispose of it. The characters are familiar archetypes, the good sister (Jen Soska), the bad sister (Sylvia Soska), the junkie-girl (Rikki Gagne) and the God-fearer (C.J.Wallis). I was surprised to hear that most of the actors were also on the crew, as the performances were actually fairly polished for this type of film. It is inspirational for an aspiring filmmaker like myself to see such a quality piece of entertainment produced for very little money by a group of devoted friends. All the money in the world cannot buy inspiration, and there were more interesting people in Dead Hooker than a thousandTransformers sequels could hope to portray. All four of the main characters were unlikable to varying degrees, but the talented cast were fun to watch.

The aspect of Dead Hooker that surprised me the most was that the film had “heart”. In the midst of our beloved schlocky depravity, there are a few legitimately tender moments between characters. The interpersonal relationships of the main characters are actually developed with great care, and offer the viewer added incentive to engage with the film. Granted, these are broadly drawn characters, who are purposefully stereotypical, but the writing is clever enough to make us care about them.

And the dialogue…I can’t say enough good things about the dialogue. Here are a few of my favorite lines…

– and my personal favorite, “Who wants a piece of me? Or are you all too busy sucking cock, or rather fantasizing about cock to suck in the future, or past cock-sucking experiences?”

Dead Hooker is full of the unabashedly explicit language and violence inherent to its genre. Eyes are knocked out of their sockets, arms are severed, brains are blown out. Copious blood is spilled by baseball bats, power drills, chain saws, shaky Mohels, ice-picks and pliers. There is more than enough gore to satisfy the most blood-thirsty splatter-film fan.

Dead Hooker In A Trunk delivers exactly what it advertises. It is a brilliantly dumb, delightfully trashy rebuke of austerity and political correctness. If you are not grinning ear-to-ear by the end of the film, it’s likely you are not a member of Dead Hooker‘s target demographic.

In fact, this review is much too analytical, and I could have summarized my feelings in 5 words…Dead Hooker In A Trunk. ‘Nuff said.

The Mummy: Tomb of The Dragon Emperor