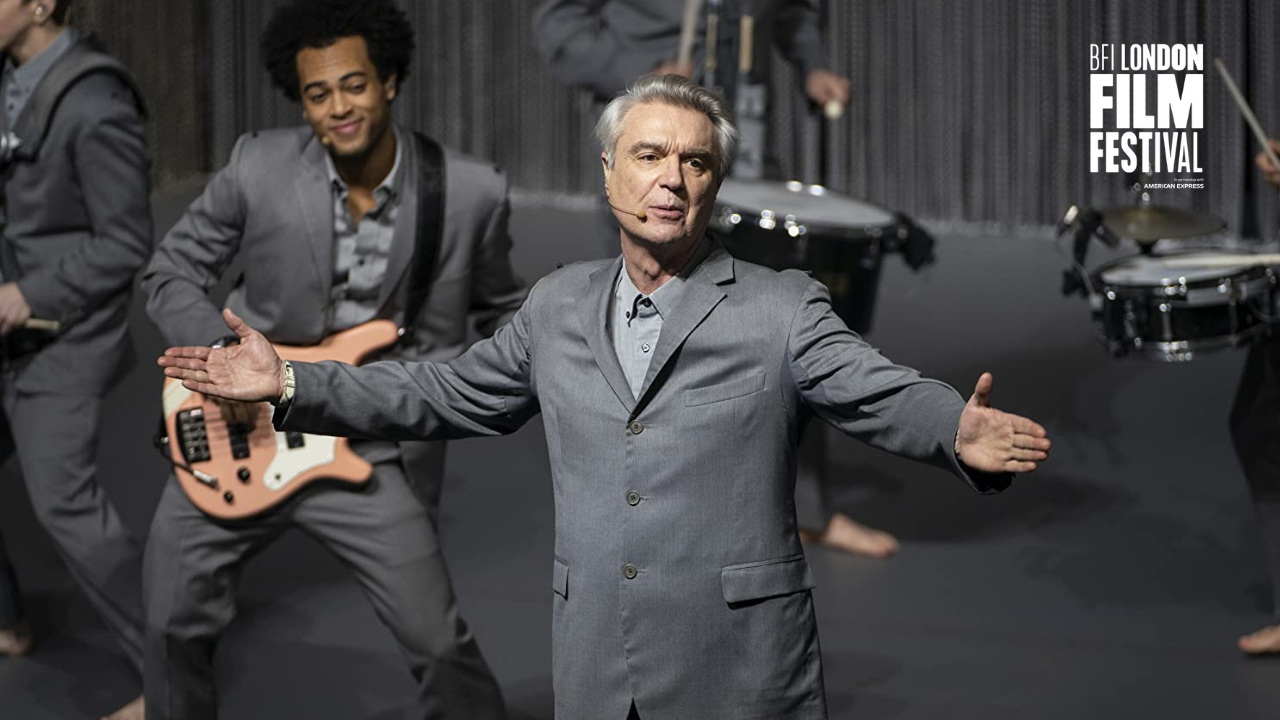 A silver-haired musical supremo clutching a model of the human brain waxing lyrical about the multitude of neural connections a baby has, with an adult’s slowly dwindling as the precious years pass by, doesn’t immediately scream a killer opening salvo for a stage show. But at the tender age of 68, Talking Heads co-creator David Byrne hasn’t arrived here playing to convention. A fresh arena for his distinctive visual artistry already lapped up by a certain theatre district in New York City.

Yet there’s nothing broad in his ways here. Collaborating with the cinematic force of nature that is director Spike Lee, they encourage us to strip back the harmful excess and paraphernalia of a ruptured world, to create new possibilities. To nick, a line regularly brandished around by the potential next US President. Build back better.

Suppose Byrne is feeling the hefty weight of our political problems in American Utopia. In that case, you’d hardly believe it in the sprightly personable way he commands his sparse albeit beautifully lit space. Grounded in his playful interactions with a transfixed audience, whilst propped up by tremendous talents handpicked from around the world, it’s a show that revels in its bare essentials. A Scotsman himself. Such an assembling is a pitch-perfect product of immigration that is refreshingly free of theatrical trickery, untethered to mirror the want of the same freedoms outside of its setting, with a pocket of people seemingly hellbent on stifling that.

A loose narrative structure that is laser-focused in its intentions. Byrne is on a mission to delve deep into his extensive back catalogue to unearth new meanings in the adored lyrics, that may just unlock that jubilant spirit again amidst a bleak landscape, touching upon important subjects without slipping into the familiar trap of preachiness. Spotlighting a willing portion of the audience to create a stark image of the disheartening levels of voter turnout in local elections, his way of gently beating the drum to register in a time, where the volume of suppression is inescapably turned up.

Confronting a predominantly white crowd with the racial conflicts that remain so prevalent, with the names George Floyd, Breonna Taylor and Ahmaud Arbery rightfully still leaving the mouths of many in an ongoing fight for justice and seismic change. It all serves as a direct, urgent plea for our engagement to extend beyond a seat in the luxury of a theatre or a cinema. It’s us, a privileged majority that should be taking up the mantle to grapple with the challenges at hand, displaying a willingness to reconnect with our basic human values to progress. Otherwise, like the classic ‘Heads track goes. We’re on a Road To Nowhere…

With Byrne and his fellow creatives rocking grey suits that almost feels like a stab at capitalism and the murky areas of morality, those that govern us operate within. The bright bursts of colour they fill their performances with make for an exhilarating contradiction. Powering through a jam-packed setlist featuring the likes of Everybody’s Coming To My House, This Must Be My Place and on a personal level, the welcome surprise of Byrne’s 2002 X-Press 2 collaboration Lazy which is a showstopping inclusion, they all serve their soulful purpose. Not content with a by-the-numbers static approach. Suppose there’s any doubt that a single inch of that stage isn’t littered with infectious energy. He is swift to remedy it with his trademark stamina and vigour, with a dizzying array of overhead and side stage shots to compliment Byrne’s heartfelt universal message alongside the glorious choreography on display.

The moment which epitomises why these two masters of their respective art forms are a match made in heaven, particularly at this crossroads in American history is the hair-raising cover of Janelle Monae’s Hell You Talmbout, who was quick to give Byrne her blessing in leading this protest on a nightly basis. No stranger to a roll call in his blistering body of work, Spike Lee deems it the opportune time to extend it beyond current events and not leave those who’ve succumbed to needless racial violence to become just another statistic, momentarily shifting the focus to the lingering pain of black mothers to poignant effect. In such confines. Members of the crowd are all too willing to Say Their Name. But it must extend beyond those four walls and reverberate into the wide-open spaces.

An invigorating, inclusive call to arms that is both timely and euphoric. David Byrne’s American Utopia is a captivating concert film for the ages.