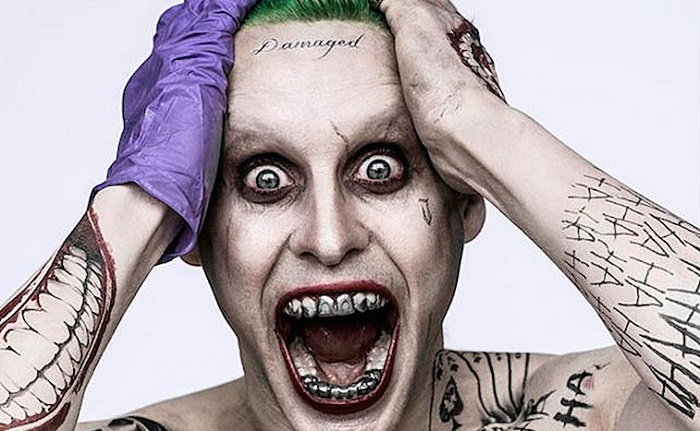 One of the most widely-mocked aspects of 2016’s favourite critical punching-bag, Suicide Squad, was the ludicrous tattoo stamped across Jared Leto’s Joker’s forehead.

The tattoo, a cursive rendering of the word ‘Damaged’, was explained by director David Ayer at the time as follows: “Joker killed Robin and Batman basically smashes his teeth out and locks him up in Arkham Asylum. It’s in the asylum where Joker would have done the ‘Damaged’ tattoo as a message to Batman saying, ‘You’ve damaged me. I was so beautiful before and now you’ve destroyed my face.’ That’s where the grill comes from.”

That explanation was denigrated and derided at the time for being about as subtle as a sledgehammer to the ribs, and now it appears that with two years’ worth of hindsight Ayer has changed his tune.

When asked on Twitter about the inspiration behind the ‘Damaged’ tattoo, and whether or not it was his idea, Ayer responded bluntly by saying “Yes, I have to fall on that sword. It was one step too far.”

Jared Leto’s Joker has been criticised by the press and the public since his visage was first revealed, and much of Leto’s screen-time was ultimately cut from the finished film. This shocked some, as much of the pre-release buzz had been focused on how ‘method’ Leto had been in getting into character (or, rather, how much of an asshole he’d been to his co-stars in a juvenile attempt to shock – used condoms sent to cast mates, etc.), but the move ultimately improved the film – with Leto’s Joker ranking dead-last in most people’s lists of favourite interpretations of the clown prince of crime.

Joaquin Phoenix is currently in the process of shooting a gritty origin movie for the character which will be separate from Warner Bros.’ shared universe of DC Comics films, where Leto is still officially on-board to continue his portrayal.