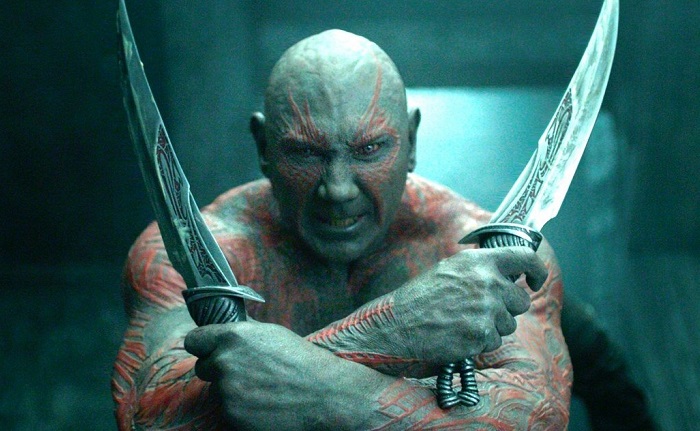 The feud rages on as Dave Bautista has now spoken openly about the fact that – chances are – he won’t be back in the green make-up as Drax the Destroyer for Guardians of the Galaxy Vol. 3.

The film was shelved indefinitely a few weeks ago, following a targeted cyber-attack on director James Gunn (who helmed the first two films) that saw alt-right activists drudge up old ‘shock-humour’ tweets of Gunn’s that made light of paedophilia, amongst other things. Gunn had previously apologised for the tweets, deleted them, and made them known to Disney, but following the latest scandal the House of Mouse made the decision to sever creative ties with the director, and (following cast dissent) to put the production of Vol.3 on hold.

Meanwhile, over the weekend Bautista was on ITV’s The Jonathan Ross Show, where he was asked about the subject and referred to the conversation as “bittersweet”.

“I’m not really happy with what they’ve done with James Gunn,” the actor, who is personal friends with Gunn, said during the interview, “They’re putting the movie off. It’s on hold indefinitely. To be honest with you I don’t know if I want to work for Disney.”

Comedian Kevin Hart, who was also on the show, tried to cut tension by quipping “I’ll tell you what… I don’t wanna be here when he gets upset so I suggest we change the subject.” Bautista, to his credit, shrugged: “I’m not afraid to admit the way I feel.”

Dave Bautista was last seen as Drax in Marvel’s Avengers: Infinity War, which is out now on 4K, Blu-Ray, DVD, and Digital, rated 12A.