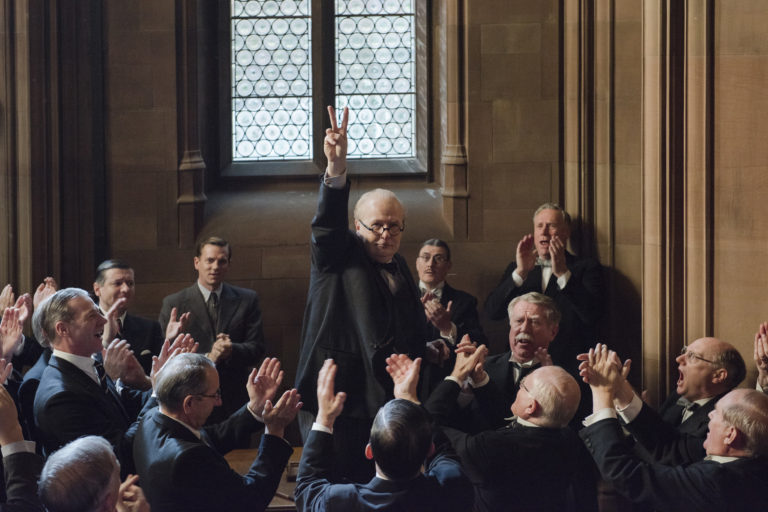 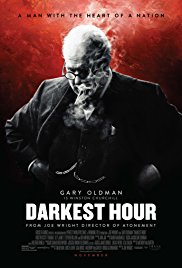 With his drooping jowls, ever-present cigar, and bottomless supply of witticisms, the Winston Churchill of Joe Wright’s Darkest Hour is very much the figure we have come to know from countless wartime newsreels, photographs, and history books. In his portrayal of Churchill, however, actor Gary Oldman reveals a more human dimension to this larger-than-life persona, capturing the Prime Minister’s vulnerability, intelligence, eccentricities, charisma, and shrewdness as a political and military tactician.

It is no small feat for an actor as recognizable as Oldman to vanish so thoroughly into a role (admittedly with the help of cosmetics). It is even more challenging given the number of actors who have already taken turns portraying Churchill (including Brian Cox in Churchill just this year). In Darkest Hour, however, Oldman gives his competitors a run for their money with what is less a performance than a cinematic resurrection, capturing Churchill’s voice, mannerisms, and character with an eerie, pinpoint accuracy. It is a depiction that captures both Churchill’s humanity and his greatness, making a convincing case that the two are inextricably related.

Oldman’s Churchill is one forced to undergo a baptism by fire, confronting both the Nazi peril, and the scepticism of many regarding his own capabilities. As the film establishes from the get-go, Churchill was far from the first choice for Prime Minister following the resignation of his predecessor, Neville Chamberlain.  At the outset, we see Churchill appointed with grumblings only after all other options have been exhausted. While others can debate the historical accuracy of this and other segments of the film, it certainly works from a dramatic standpoint, turning Churchill into a sympathetic underdog triumphing in the face of adversity that would crush all but the strongest of us.

It would be hard to imagine a more dramatic subject than the Second World War. Yet Darkest Hour functions as a fairly modest character study, capturing the embattled leader’s struggle against the policy of appeasement advocated by Chamberlain and Edward Wood, Earl of Halifax and British Foreign Secretary. Following Churchill’s appointment as Prime Minister, Halifax and Chamberlain hatch a conspiracy to expose him as a war hawk hell bent on destroying any chance of peaceful negotiation with Germany. This possibility, Churchill understands, is non-existent, and worse, a dangerous fantasy he refuses to indulge.
“When will the lesson be learned!” Churchill thunders at Halifax during a stormy War Cabinet meeting. “You cannot reason with a tiger when your head is in its mouth!” Even U.S. President Franklin Roosevelt seems slow in appreciating this message, as he rejects Churchill’s plea for additional planes to help Britain stave off the looming Nazi invasion.

While the restricted focus of Darkest Hour may dampen some of the excitement, it does create a claustrophobic atmosphere as we follow Churchill through subway tunnels and corridors and smoke-filled cabinet meetings, brooding over his next move. This ominous atmosphere does not spare his staunchest allies, including his wife, Clementine (Kristin Scott Thomas). Though Thomas poignantly captures Clementine Churchill’s superhuman patience and affection for her at times overbearing husband, she and other characters cannot help being eclipsed by the complex, towering personality at the heart of the story.

Darkest Hour is not without its flaws in other respects as well. Given its risk-taking, larger-than-life protagonist, it is unfortunate that Wright’s script and direction could not follow his example. With the exception of Churchill himself, the dialogue of those around him is often jarringly stilted, sounding less like natural speech than one being delivered, or the words of a historian placed into the character’s mouths. Wright’s impersonal, workman-like direction suffers from its fear of going out on a limb, unable to shake off the dry stuffiness that plagues most historical dramas.

Despite these shortcomings, however, the film succeeds thanks to its sincerity, and the power of its central performance. It may be the Darkest Hour, but that hour belongs squarely to Churchill and Gary Oldman, the actor his ghost decided to possess. Given the masterclass of acting on display here, there are certainly far worse things one could ask for.

Jumanji: Welcome to the Jungle