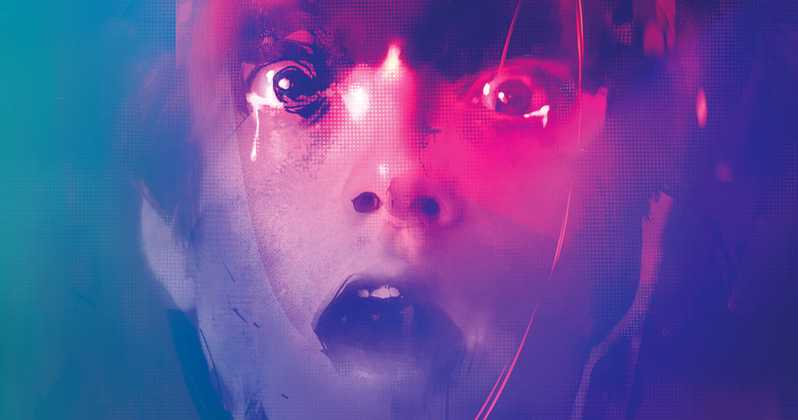 Ever wondered what would happen if Dostoevsky’s The Double was adapted as a manic coming-of-age body horror film? Well, enter Daniel Isn’t Real — a sleazy, garish nightmare, loosely based on Brian DeLeeuw’s novel In This Way I Was Saved and assuredly brought to screen by writer/director Adam Egypt Mortimer. A passion project years in the making, Daniel finally found its home in Elijah Wood’s neon-drenched production house Spectrevision (the company behind last year’s phantasmagoric Sundance darling Mandy and the upcoming Lovecraft adaptation Color Out of Space) and has since begun its triumphant crusade across the film festival circuit. Sporting a scintillating color palette and a narrative as unfocused and tempestuous as a teen with raging hormones, Mortimer’s sophomore effort manages to not only nail its vibrantly cosmic aesthetic but also make it an inherent feature of this dizzyingly inventive horror feature.

Setting the correct tone with a fathomless magenta void for the opening scene, the film then transitions to a random act of senseless violence: a shooting in a small metropolitan café. Our still very young protagonist Luke becomes a witness of this horrific event and, as a defense mechanism, creates an imaginary friend to cope with the trauma. From this point on, Luke and the fictional Daniel are inseparable best friends, yet there’s something not quite right about the supposedly unreal playmate: from his greasy slicked back hair to the sinister smile, this innocent kid’s intentions are clearly far from pure. What started as an innocent fantasy begins steadily turning into a malevolent parasite and, as evidenced by the near-death experience of Luke’s mentally ill mother Claire (Mary Stuart Masterson), needs to be contained.

Years later, Luke (now played by Miles Robbins, the stoner teen from David Gordon Green’s Halloween), an art college student tormented by his traumatic past, frees Daniel (wildly unhinged Patrick Schwarzenegger) from the mental captivity and pulls out all the stops to become the prime version of himself — at the expense of losing his own identity to an egocentric malicious force.

Like a rebellious teenager who’s been given adults-only creative tools for the first time, Mortimer crafts something uniquely imaginative out of a relatively straight-forward story — “nice guy has a dark alter-ego” sure is a familiar set up — in the most perplexing, post-ironic fashion. Fitting just in line with Spectrevision’s recent output, the protagonist’s mind here is visualized as a lucid maze-like structure, filled to the brim with traumatic mementos and haunted by a demon who looks like cubist’s worst nightmare (and I mean that in the most complimentary way possible). Constantly fluctuating between reality and fiction, the film manages to stay true to its mind-bending nature at all times, periodically reminding the audience of its mischievous roots with paranoid editing and erratic, borderline unintelligible storytelling. Mortimer is clearly having the time of his life here, soaking the entirety of Daniel’s relatively short run time in the atmosphere of lurid delirium and skillfully concealing any and all answers to the most tempting post-viewing questions. Surely, it’s the kind of nightmare you’ll want to experience again.

For a film so focused on toxic male energy, Daniel Isn’t Real certainly takes a lot of chances with the way it treats its leads. Miles Robbins is wonderful in his sympathetic portrayal of Luke, bringing some of that hipster grunge vigor to an already idiosyncratic table. At the other end of the spectrum, Patrick Schwarzenegger (like father, like son) seems to be hamming it up as a stylish egomaniac with boundary issues, randomly showing up out of nowhere like a severely messed up rendition of Genie. There’s a tangible sense of compassion to the way Mortimer and his co-writer DeLeeuw treat both of these characters, even when some of the more horrific acts committed under the influence of Daniel’s power are shown in the most aggressively callous way — a quality that makes you question not only the intention of director’s vision but also the true nature of this “imaginary” character. Could it be interpreted as a heavy-handed, misguided metaphor for mental illness? Absolutely, but it still feels like one of the most empathetic portrayals of that subject matter in genre cinema.

Fueled by unadulterated psychedelic energy and grotesque body horror, Mortimer’s second feature delivers just the right combination of substances to achieve the desired effect. A midnight fare at the core, this extravagant riff on the classic premise is unmistakably flashy, loud and eccentric, but, just like all superb horror works, Daniel Isn’t Real bids farewell to you with an insatiable desire for more of its rowdy flamboyance.