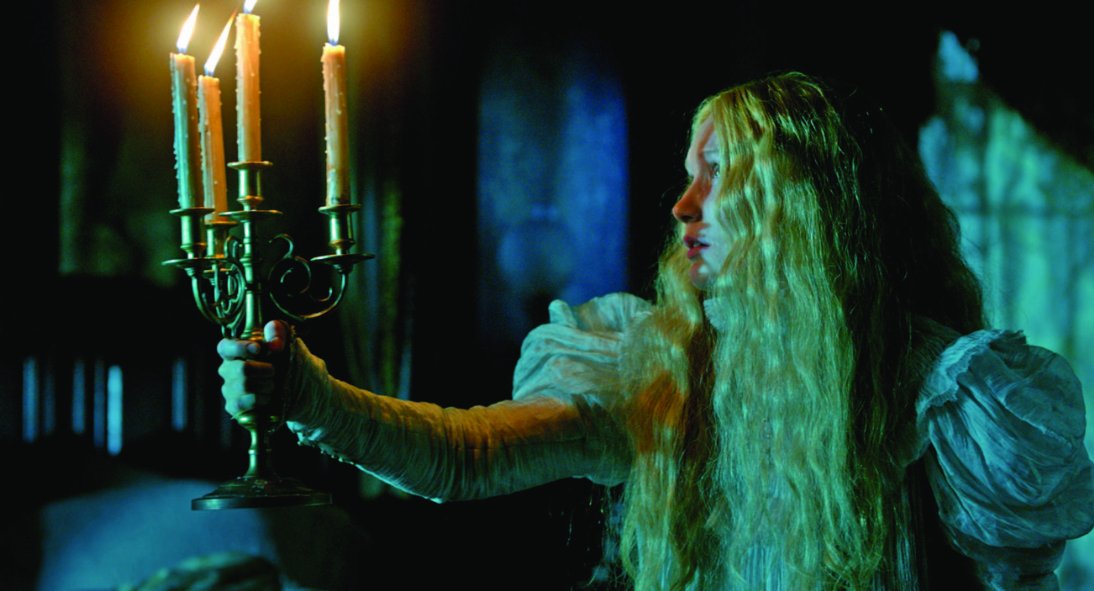 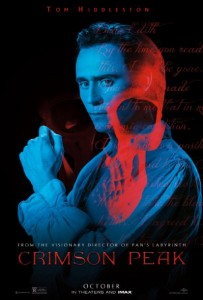 It took exactly 227 days for my favorite horror film of the year to arrive, but I am thrilled it is finally here as the hauntingly majestic Crimson Peak. From its first frame to its last, Crimson Peak has transcended the clichéd disasters we’ve had to deal with in 2015, and it does so in an elegantly macabre fashion that only Guillermo del Toro has mastered. Reminiscent of other films he’s directed and produced—Pan’s Labyrinth, The Devil’s Backbone, and The Orphanage (all of which I highly recommend)—Crimson Peak tells a grippingly disturbing tale in a realm where the things you fear become embodied and monstrous. A taste of Crimson Peak’s plot is perhaps the best way to demonstrate its importance as a piece of supernatural, Gothic, and romantic horror.

Crimson Peak takes place in the 19th century, where puffy sleeves and puffy hair and puffy everything (minus ridiculously tight corsets, of course) were all the rage. For men, newly pressed suits and ridiculously long beards were a must, because how else would everyone possibly know how rich and wise you are? The film follows the sinister events Edith and her puffy sleeves are lead into, all which follows an experience she has as a child where her deceased mother appears to her as a monstrously deformed ghost, warning her of “Crimson Peak…when the time comes, in approximately fourteen years, but I’m telling you now as a half-faced zombie to traumatize you as a child.” The quote may or may not have gone like that, but you get the gist.

Jump fourteen years and Edith is now working on a ghost novel, but given it’s the 19th century and no one cares what women write (yet), her prospects don’t get very far. Being the feminist lead that she is, she doesn’t give up—that is, until she completely forgets about her book and basically everything else in her life when she falls madly in love with Thomas Sharpe, played with eerie and seductive perfection by Tom Hiddleston. A young prospector looking to make his big break with a mining machine, Thomas becomes enchanted with Edith after meeting her father, and we follow their relationship as it descents into a horrific, gory madness. Like his previous work, Del Toro is not gratuitous with his gore, but when it is present, you will cringe for dear life. His use of practical effects for blood in juxtaposition with loads of CGI gives the film a modern look to an authentic Gothic film, which can be pretty campy sometimes, but it’s the sort of thing you’d expect from a ghost story anyway—especially one seeping with melodramatic romance as well.

Crimson Peak is truly an exercise in finding cinematic beauty in the dark and dilapidated, both physically and metaphorically. Edith eventually moves into in an old, decaying house with Thomas and his sister, Lucille, and this is when the omen she was told almost a decade and a half before comes to life in a gruesome manner.

Visual aesthetics aside—and highly aesthetically pleasing it is, I must say—Crimson Peak is a very grim tale about love, deceit, and the ghosts of our past that haunt us. “Love makes monsters of us all” is perhaps the greatest line in the film that captures its essence perfectly, told with morose distain by the elegant Jessica Chastain.