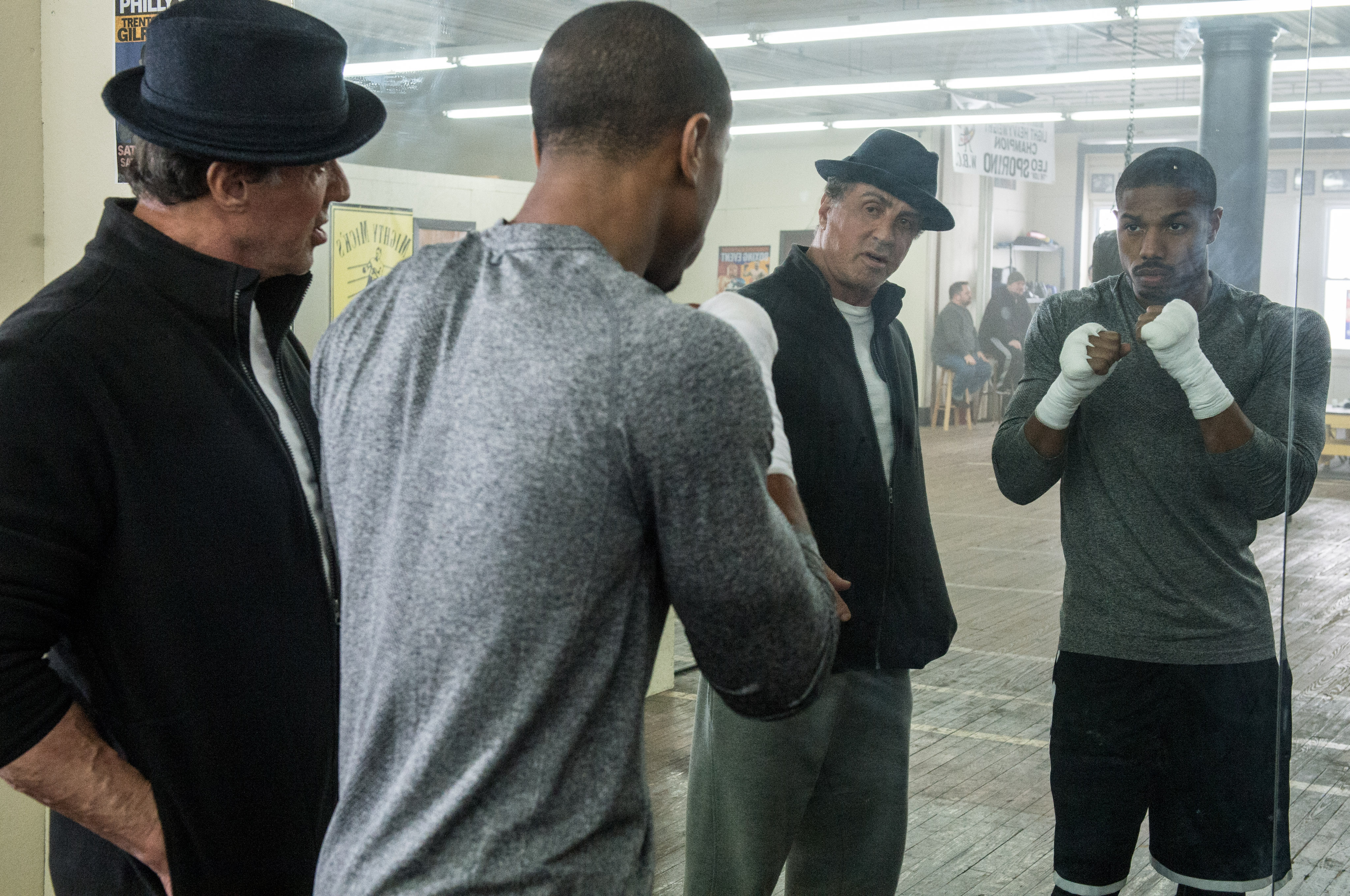 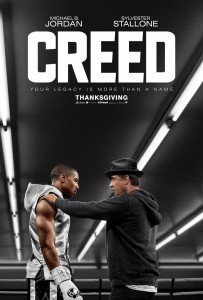 I feel like I can make a fair assessment of the movie I’m about to watch simply by the quality and inventiveness of it’s title card. There is just something about the way this opportunity can be executed that seems to somehow connect with how far the director was willing to go to make every ounce of his film thrive. This is all to say that Creed has a pretty great one and from the moment the title and namesake of our lead character rises on to the screen with an epic and bombastic score behind it the movie just rolls. What I truly appreciate about the suggested epicness that director Ryan Coogler (Fruitvale Station) implies with this title sequence-that is set up perfectly by giving us an epilogue of sorts that shows a young Adonis Johnson on the fast track to nowhere in 1998 as just another kid in juvy who likes to fight-is that it recognizes the legacy of what the film is taking on and in this moment sets a tone that encapsulates everything the rest of the movie will attempt to demonstrate through it’s actions. In essence, Coogler sets the stage in such a manner that let’s us know this movie means business and that, while it will operate in the world of Rocky, is a fresh perspective on an age old tale for a new generation of underdogs. The script by Coogler and Aaron Covington hits all of the expected beats of a film such as this, but they are executed with such authenticity and weight that finds real credence in the source material that it’s genuinely effective. That’s what makes aRocky movie a Rocky movie, right? The overwhelming feeling of accomplishment, of overcoming insurmountable odds. As we’ve more or less seen Rocky grow from an ambitious thirty year-old with nothing to lose to a nearly seventy year-old man who’s come down on the other side of life battered and broken, but never beaten there is little left to say. This isn’t a movie about Rocky though, and so the real question moving forward was going to be if Adonis Johnson could resonate in a way that we’d feel the need to stand up and cheer. In summation, round one goes to Creed.

Coming to visit the young Adonis, dubbed “Donnie” by his friends, Mary Anne Creed (Phylicia Rashad), or the late wife of Apollo (Carl Weathers), offers to take in the young juvenile despite him being the product of an affair her husband had before he died. It seems Adonis has also lost his mother and given he never knew his father he has nowhere left to go. Fast forward seventeen years to the present day and we are presented with an Adonis (Michael B. Jordan) who has had a steady upbringing from Mary Anne and attended what is no doubt the best schools Los Angeles has to offer and is now being promoted at his corporate job that he finds no passion in. Given what happened to her husband, Mary Anne has kept Adonis as far from the boxing world as she possibly could, but being his father’s son Adonis is drawn to the ring. Unbeknownst to Mary Anne, Adonis has been making his way to Tijuana from time to time in order to participate in underground boxing bouts where he proudly reps a record of 15-0. As the known youngest son of Apollo in L.A. no one will take on the young fighter as Wood Harris (Remember the Titans, The Wire) plays the owner of a local gym who tells Adonis he can’t hang with his fighters. That the fighters he trains have had to work for everything they have their entire lives leading the chip on Adonis’ shoulder to only grow bigger. With this atmosphere being anything but conducive to his aspirations Adonis takes off for Philadelphia in hopes of coaxing the former World Heavyweight Champion and late friend and former rival of his father, Rocky Balboa (Sylvester Stallone), into being his trainer and mentor.

While it is agreed upon by most that the Rocky sequels grew increasingly cartoonish as time went on don’t forget that the original 1976 film was something of a scrappy street tale that overcame it’s own set of odds by beating out the likes of All the President’s Men for the 1977 Best Picture trophy. To that effect, Creed is set in the same tone and style of the original. Coogler and cinematographer Maryse Alberti (The Wrestler) give the film a cold, gray palette that captures the chilling Philly winters and the toughness Adonis will need to make it through Balboa’s training and into the ring where the colors can explode, complimenting the climax of the film and making the audience feel as if we’ve truly been on a journey. Coogler keeps things at street level, paying homage to the first film, but never allowing his film to become little more than a mimic of what we’ve seen before. There are no less than three montages, sure, but none of them ever use any of the famous Rocky music and each are more rousing than the last. Coogler walks this fine line by embracing the culture of today in his film and exposing what a boxer who came from the opposite end of the spectrum as Rocky would do in this environment. While he may not use any of the familiar music, we feel the weight of the multi-generational story just under the surface. Adonis is looking for nothing more than to prove himself on his own merit and in this regard the film is something of a metaphor for the film industry as a whole at the moment. Everything in Hollywood right now thrives on brand recognition and that is how Adonis’ career comes to fruition, by the recognition of his name, but like Adonis the movie and Coogler are out to prove it’s worth the attention it’s getting not just for it’s credentials, but for it’s own take on the boxing genre. Were Creed just another boxing movie it would essentially be looked at as another in a long line of boxing movies inspired by Rocky, but by embracing that legacy, as Adonis eventually does with his father’s name, the film is able to gain from that advantage while establishing itself as something fresh and new with more to offer than simply being a Rocky re-do.

Beyond the bigger themes and objectives that Creed is looking to accomplish in order to cement itself as the new guy in town it would be a whole bunch of effort for nothing if the guy himself wasn’t worth paying attention to. As the titular Creed, Michael B. Jordan truly owns the role as he takes the deserted, young kid we meet in the beginning to a successful, well-mannered college graduate that is willing to throw it all away and work hard enough to do what he really wants to do with his life. It would be false if Adonis didn’t butt heads with the stubborn and somewhat shy Rocky every once in a while, but while there was even a point in the film where I was pleading that an exchange between the two not go the way I expected it to (while not expecting that wish to be granted) Coogler and Jordan allow the character to move forward with a level head thus foregoing much of the melodrama we might typically be subjected to in this type of movie. That isn’t too say Adonis isn’t still a young man or doesn’t have flashes of his showy father in him as the film sees Jordan’s Adonis going out to clubs, making eyes at his new neighbor, Bianca (Dear White People‘s Tessa Thompson), and getting into fights with guys outside of the ring, but it all coincides with the multi-faceted performance that Jordan delivers. The relationship that does develop between Bianca and Adonis is one that could have felt forced or even shoe-horned in, but Jordan and Thompson have such a natural ease to their chemistry that we enjoy seeing the two build something mature and stable together without ever introducing any cliched factors that might threaten their happiness. The only thing that’s going to get in the way of these two is themselves and given they recognize this it makes our perception of what makes these characters tick all the more interesting. As for Stallone, it’s simply elating to see him take on the character at this stage in life and rather heart-warming in the relationship he develops with Adonis. Together, each of these aspects form a film that has nearly perfect pacing, gives us boxing matches that keeps our palms sweaty and our hearts racing, with enough tension, laughs and downright dramatic heft to signal that Coogler is the real deal and that this likely won’t be the last we see of Adonis Creed.