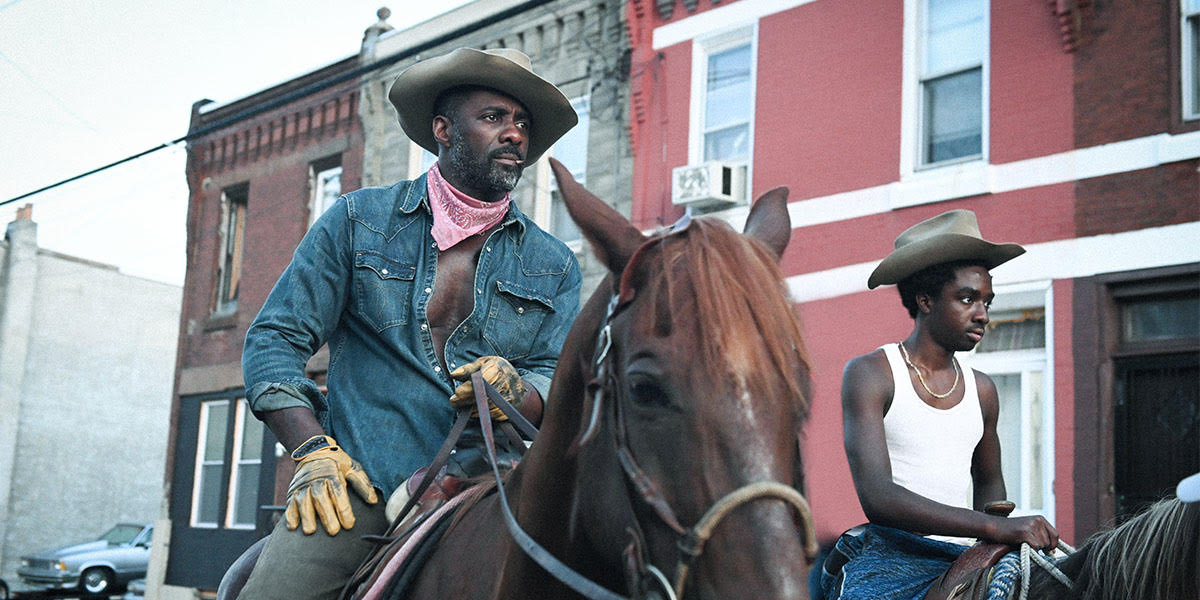 Concrete Cowboy tells a tale that is not often represented on the big screen as it depicts the world of black urban cowboys. On the surface, the film stars Idris Elba and has a father-son relationship at its heart. Still, Concrete Cowboy is all the more fascinating for its exploration of this cowboy world on the fringes of the American dream in North Philadephia. The premise is gripping but not entirely fictional either. However, based on the novel Ghetto Cowboy by Greg Neri, as these cowboys do indeed exist really life at the Fletcher Street Urban Riding Club which, as a non- profit organisation faces the constant closure.  Fletcher Street was able to undertake successful fundraising in 2015 to secure the future of its stables, however. Hopefully, following its premiere at the 2020 Toronto International Film Festival, Concrete Cowboy will attract positive attention to the plight of the ranch to assist with its future.

Concrete Cowboy delves into familiar territory of the urban pressures facing an impressionable young boy and the tough love received from a father, played by Idris Elba. Such elements, whilst compelling, do not provide any new insight within the coming of age genre. Caleb Mclaughlin’s, of Stranger Things fame, performance as the troubled teenager Cole, however, is captivating to watch from start to finish as he attempts to navigate his way through the different worlds in an uneven transition. McLaughlin appears in his first feature film role within Concrete Cowboy and breathes new life into the film’s reliance on predictable tropes. Elba, despite his engaging screen presence in this ode to westerns, does not seem very stretched in his role as Harp, particularly during Concrete Cowboy’s emotional scenes.

Facilitated by Moonlight’s Jharrel Jerome as Smush, it is the dynamic between the two younger actors that propels Concrete Cowboy’s coming of age narrative into a standout feature. The camaraderie seems natural, plus they both love horses. After Chloe Zhao’s film The Rider, the parallels between becoming a man and developing that bond with horses is mesmerising to observe on screen. Together with Cole, and the seemingly charming Smush, attempt to embark on that voyage of self-discovery and belonging but are attracted by the exciting but criminal world of gangs to their detriment.

Despite the sense of alienation felt by the younger boys, there is a sense of community reverberating throughout Concrete Cowboy. The ranch advocates, through various voices, that effectively it takes a ‘community to raise a child’ and is invested in teaching those tough life lessons. Whilst their world may effectively be a microcosm and appears quite insular with its own practices and internal policies, the threat of the outside world is still not that distant. This notion of violence is particularly striking when the women in the community mention praying for the lost souls and for every young, black teenager out on the streets. Such sentiments are incredibly relevant in the current climate given the spate of incidents recently involving disproportionate levels of violence meted out during altercations with police in the US.

However, in Concrete Cowboy, there is an inherent respect for elders seen in the community too, and the women equally have a prominent position, which is not always a perspective seen. As such, there was the founding of the Federation of Black Cowboys in 1994, in New York, in actual life to preserve such communities and their way of life. It is a situation remarked upon in Concrete Cowboy as one character retorts that black cowboys were effectively ‘whitewashed by Hollywood’ thereby, unfortunately, removing their historical significance. It remains, as ever, important for these black stories to be told and reclaim their role in the past and present.

Whilst director Ricky Staub is not a member of the black communities, the direction in Concrete Cowboys conveys a level of respect for the real-life horse trainers. Staub impressively guides non-actors, who are horse trainers, such as Hamilton ‘Mil’ Prattis to deliver authentic performances opposite Elba and McLaughlin, which adds to the mesmerising dynamic. Wide-angle shots equally provide that sense of awe when confronted with the beauty of nature through panoramic shots and the focus on the interaction with the horses and that enviable sense of freedom.

As a western, the interweaving of the tender, but fractious, father-son relationship provides a unique perspective within Concrete Cowboy. Concrete Cowboy is a powerful, triumphant drama providing a voice to a community of horse trainers that have been consigned to history. Hopefully, their voice has now been represented successfully within Concrete Cowboy and the various black cowboy organisations to ensure their survival.

Concrete Cowboy does engage in some stylistic flourishes with nods to other westerns such as Magnificent Seven and it is pleasing within the credits to view the real-life horse trainers, Ivannah Mercedes and Hamilton ‘Mil’ Prattis. Concrete Cowboy is well-acted and moving with a stellar cast including Method Man; it is an enjoyable and beautifully made film providing that much-needed representation and insight into the forgotten world of black cowboys.