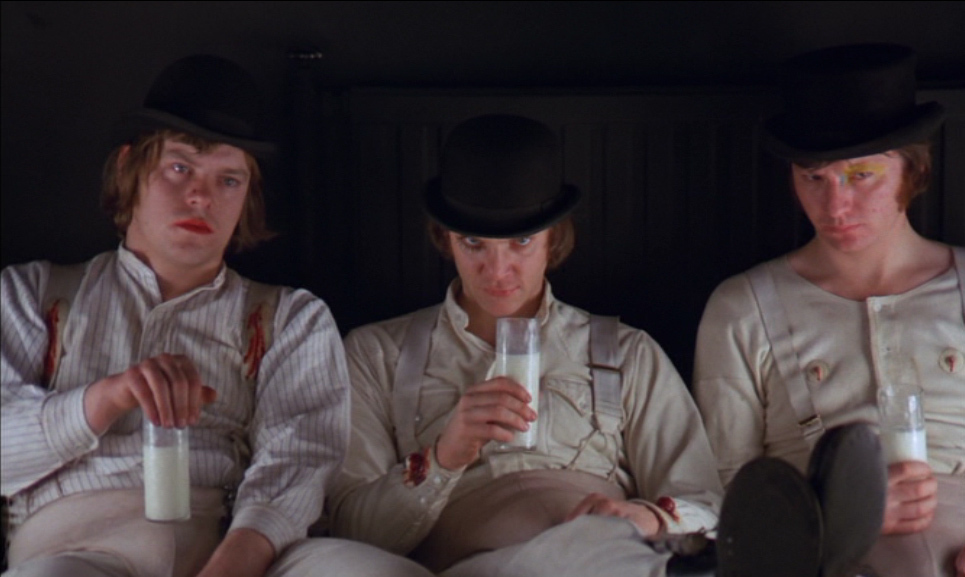 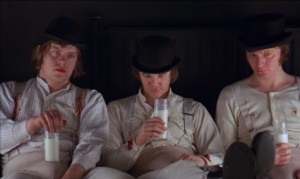 t’s an iconic and controversial movie about the relationship between society and its ne’er-do-well citizens, considering whether our nation’s malcontents drag us down or if the flaws in our culture foster disenfranchisement. It’s based on a classic novel by a prolific author who wrote all the prose in an almost-incomprehensible slang dialect, requiring the reader to learn the language asthey read; a dialect copied by the film.

The story follows a young man living a life of crime with a gang of cronies. Despite living intimately together, there is no love lost between our hero and his fellow felons. Eventually, he winds up caught by the police and sentenced to rehabilitation. This is effective and our protagonist breaks his addiction to his vices and becomes a functional member of society. That is, until he runs into his former associates who force him back into his old life and habits. In the conclusion, our young undesirable heroically overcomes both his old friends and society as a whole, regaining his beloved addiction and also his freedom by pulling a brilliant double-cross.

The question you now need to ask yourself, of course, is which movie am I talking about – A Clockwork Orange or Trainspotting? The answer is both. 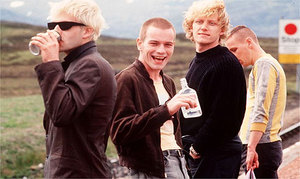 The former is based on Anthony Burgess’ 1962 novel, which is set in a dystopian future driven to extreme lengths trying to control rampaging gangs of youths. The novel is written entirely in a made-up slang language called “nadsat” and features a protagonist ‘addicted’ to violence and rape. Alex, as our ‘hero’ is known, leads a violent gang of “droogs” in a series of house invasions – raping, robbing and beating the occupants and getting away scot-free, until his lieutenant gets tired of taking orders and shops him to the police. The liberal justice system decides to brainwash Alex so he is subject to terrible nausea whenever he tries to commit a violent act. As a side effect, Alex also suffers when he tries to listen to Beethoven, with whose music he had been obsessed. Eventually, he comes across his old allies who beat him brutally and leave him for dead, a situation that earns him the pity of the media as well as celebrity status.

The latter, on the other hand, was based on the 1993 novel by Irvine Welsh, which takes a variety of Welsh’s short stories and fleshes them out into a narrative. Its focus is on a gang of heroin addicts and is written entirely in Scottish dialect. Our protagonist Mark “Rent-boy” Renton is a young junkie running with a crowd of fellow addicts until he is caught shoplifting to feed his habit. Forced to go cold turkey, he is delighted to be free of his old lifestyle, but finds his existence pointless and boring without an all-consuming addiction to drive his every decision. Moving away to start a new life, he is pursued by his old colleagues who are on the run and want him to take part in a fortuitous drug deal to fund their flight from justice. In the end, Renton pulls a fast one and does a runner with the drug money.

The novels themselves bear little similarity to one another. Trainspotting has a wandering portmanteau style, fitting its origins, while Clockwork Orange is a first-person narrative with a clear structure and message. Stanley Kubrick’s 1971 adaptation of A Clockwork Orange and Danny Boyle’s 1996 version of Trainspotting, on the other hand, have a definite similarity.

Both films retain the unique dialogue, but enhance the text by utilising the unique visual style of two cult directors. Both Kubrick and Boyle use humour and surrealism to alleviate the bleak tone of the plot. Unfortunately, some critics felt this served to romanticise heroin and rape, respectively, leading to controversy and a backlash that saw Trainspotting attacked by US Senator Bob Dole, while Kubrick himself removed Clockwork Orange from UK distribution after tenuous stories emerged suggesting crimes copycatting the film were being committed.

Much of the controversy that Clockwork Orange inspired came from the juxtaposition of violent acts with light-hearted music such as the title song of Singin’ In The Rain and the uplifting crescendos of Beethoven’s Ninth. Elsewhere, the film was the first to use a vocoder in its synth music. It was a brave, experimental choice that paved the way for movie soundtracks to come.

Trainspotting, meanwhile, used a large selection of indie dance on its soundtrack, which was so popular that a second volume was released a year after the original. Indeed, a Vanity Fair poll ranked the film’s music as the seventh-best soundtrack of all time. Like Clockwork Orange, the film wouldn’t be the same without the particular music choices of the directors.

Lastly, both films made the careers of young British actors. Clockwork Orange is still the movie Malcolm McDowell is most famous for, over 40 years later, while Ewan McGregor ended up in Star Wars off the back of his performance in Trainspotting. Indeed, McDowell and McGregor have tread similar paths in their careers. Both are thespians with immense talent, but more than happy to slum it in genre trash roles, often naked.

Despite all of this, there isn’t even a question of Trainspotting being influenced by Clockwork Orange. Trainspotting’s narrative grew organically from random short stories with the same group of characters and, in written form, has little to do with Burgess’ novel or Kubrick’s film. It’s a simple case of serendipitous synchronicity.

If there is anything we can take away from the comparison, it’s just how prescient A Clockwork Orange is. If a gritty, realistic drama drawn from life experiences is that similar to a future-set story made 25 years earlier, it must have been onto something.