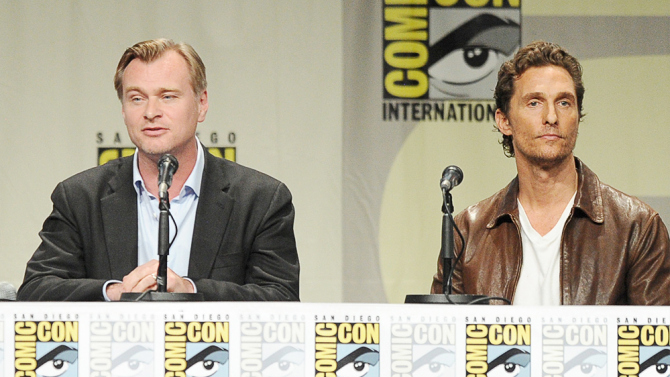 Comic-Con fans were reeling on Thursday afternoon as Christopher Nolan and Matthew McConaughey made their first-ever appearances at the San Diego fan convention, answering questions and offering a new trailer for Paramount’s “Interstellar” to the Hall H crowd.

“Thought it would be a fun thing to come down and see what all the fuss is about,” Nolan told the roaring audience.

“Interstellar” has largely been veiled in secrecy, but Paramount was looking to give fans what they want, putting footage front and center. The studio also showed footage from “Hot Tub Time Machine 2,” found footage pic “Project Almanac,” “Teenage Mutant Ninja Turtles” and “SpongeBob SquarePants: Sponge Out of Water,” which will be a combo of animation and CG live-action.

The director of “Inception” and the “Dark Knight” trilogy explained that the driving force of the upcoming sci-fi drama was going to space.

“To be an astronaut was the highest ambition,” he said. “The idea to keep exploring space farther and farther… it (fell) off greatly. We are in a period of incredible technological change, (but it’s about) what’s in your pocket, your living room. I like the idea that we are on the cusp of a brand new era and we are traveling outwards more.”

According to McConaughey, it all began in Nolan’s living room: three hours, nothing about a movie, just Nolan and the Oscar-winning actor.

“I was like, what the hell was that about,” the actor quipped. “A week later, the script came out, I read it and I liked it quite a lot and I was in.”

So what is the film about?

Said the “True Detective” star, “Cooper is a pilot, an engineer, and a widowed pilot of two children where civilization is just sustaining. There’s food, clean water, but they don’t need any explorers, no new bright ideas. Then something happens and the dream of being a pilot again knocks on his door.” The chance becomes “the greatest mission” he’s ever taken on.

Nolan explained that the spaceship, its interiors and exteriors were designed to be as “realistic as possible for the actors.” That meant actual views out the windows, for example.