When it comes to movie themes, you got them all. From war movies to romance films, there is something for everybody. However, the gamble theme is not often present but some casino scenes really mattered. For example, the roulette ball in Casablanca that landed on 22 two times, all this was possible thanks to the rigged roulette.

Another example is found in the movie 21. This movie is mainly made after a book called Bringing Down the House and just like the movie, it’s about a group of students “robbing” a casino playing Blackjack. Actually, the robbing process consists in one person taking a seat at a Blackjack table and that person just counts the cards. After a while, their friend joins knowing which cards were already played. As expected, they get caught and the action begins.

If it’s not already obvious, these examples cannot go further without mentioning Daniel Craig starring as a MI6 agent in the movie Casino Royale. This movie was not like any other James Bond films. Firstly, the new actor had blond hair and blue eyes. This new look was not welcome at all especially for die hard 007 fans. Daniel Craig had nothing in common with the previous agents such as Timothy Dalton or Pierce Brosnan. Moreover, back in 2005, right before the Casino Royale release, many fans were sure that Daniel will ruin the series. In fact, Casino Royale ended up being one of the best James Bond movies ever.

After all, some changes were needed so the movie can have a fresh feeling. If we got used to every James Bond movie starting with the same scene, Casino Royale made it different. Until then, every single film started with a gun barrel sequence in which James walks in a white room, he turns, then fires and the blood drips down the screen. In the new 007 film, the movie starts with a black and white scene and at the end of this sequence, when we think that its first victim is dead, Daniel turns around then fires and we have the first gun barrel scene. 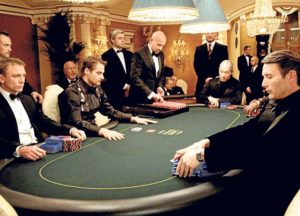 As an illustration on the movie name, there are three poker scenes that make this film better. The first one has a well made old-fashion feel that is mainly made through the dissolve process. This technique was usually seen in the 80s and is a post-process film editing that makes the transition from one image to another.

The second poker game is when Le Chiffre destroys James. Right after this game, there is a sequence that lets the agent sit alone on the table with nothing left, making the MI6 agent more natural. This is a high contrast with all the old cliché movies where James Bond was invincible. Further, Daniel gets poisoned by Le Chiffre but the secret agent survives by using the defibrillator from his car. Then he comes back and says ”I’m sorry, that last hand, killed me”.

Like I said, casinos can be a good way to improve a movie. Also, land-based casinos suffered many changes over the years. Like most casinos that are now using online and mobile platforms. For about 400 years, casinos were just ”gamble houses”, but now they adopted new technologies. The most important change was of course, the online platforms which made it possible to enjoy casino games from the comfort of our house.

For few years know, these virtual gamble houses started to show up everywhere. Moreover, there is a new online British casino called Admiral Casino and has a wide variety of fruit machines. In addition, their app is present on the App Store and you can now play slots like Sizzling Hot and Golden Sevens. Both games have 5 reels and are made by Novomatic. As has been noted, casinos made their contributions in many areas and now, thanks to the mobile technology they can be taken in your pocket.