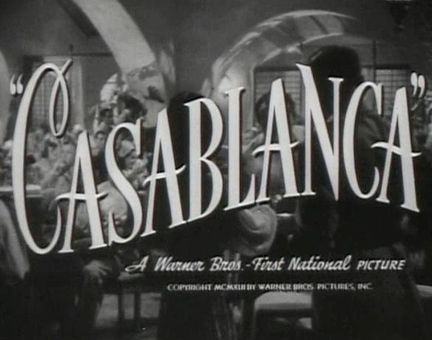 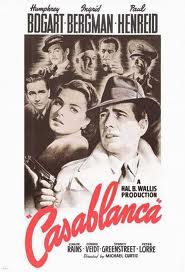 There are a select number of films that are held up as cinematic milestones and revered far beyond any of their peers. The likes of Citizen Kane, The Godfather and North by Northwest will always appear near the top of any ‘all time greatest’ list and with good reason. For me though, there is one classic which stands above all others and that’s Michael Curtiz’s Casablanca. The timeless story of love, sacrifice and friendship set against the backdrop of the Second World War still stands up even now some 70 years after its initial release. While at its core the movie is a romantic melodrama focusing on a tormented love triangle, there’s also a clear subtext focusing on the international politics of the time. Full of outstanding acting performances and arguably the most quotable script of all time, few films can match Casablanca for sheer volume of memorable moments.

For the un-initiated, the movie centres around a cynical American bar owner, Ric (Humphrey Bogart), who resides in the Moroccan city of Casablanca during the Second World War. ‘Ric’s Café Americain’ is a popular hotspot in Casablanca which has itself become a key stop on the refugee trail as desperate people seek to escape the terror of war which is ravaging Europe . Ric’s bar becomes a microcosm for the city itself, full of various different nationalities all mixing together in the supposedly neutral territory. In reality, the city is run by the Vichy French government, which was ultimately merely a puppet government dominated by the Nazi’s. Vichy French Police Captain Louis Renault (Claude Rains) is shown to be a corrupt, yet never dangerous, official who shares a mutual respect with Ric over their respective stances on the war. Ric neutral on all matters and Louis open about his lack of loyalty to all concerned.

The mood in the bar becomes more strained than usual when Nazi officials arrive to stay and begin stamping their authority on day to day life in the city. One night in the bar, a petty criminal called Ugarte (Peter Lorre) reveals to Ric that he has obtained, through illicit means, documents called ‘letters of transit’. These papers are a precious commodity in Casablanca as they guarantee safe travel through Nazi controlled Europe to neutral Portugal where any refugee, with the financial means, can buy their freedom. Louis arrests Ugarte but not before the crook entrusts the documents to Ric. Despite his bitter and apparently indifferent nature, we learn over the course of the film that Ric wasn’t always so distrustful. The Nazi’s who arrive in Ric’s Café have a file on the bar owner and reveal that he had ran guns to Ethiopia to fight the Italian invasion and also fought in the Spanish Civil War on the Republican side. What caused Ric to turn his back on his beliefs and retreat to a life of cynical apathy?

We soon learn the cause of Ric’s manner when a former flame walks back into his life on the arm of another man. The beautiful Ilsa (Ingrid Bergman) arrives at the bar and after spotting Ric’s best friend and resident pianist, Sam, she asks him to play an old romantic ditty called ‘as time goes by’. This provokes an enraged Ric to storm over ready to berate Sam for playing a song he has long forbidden. Before he can do so however, he spots Ilsa and his face contorts into a picture of pain and disgust. Ilsa introduces Ric to her husband, Victor Laszlo (Paul Henreid) who we learn is the leader of the Czech resistance against the Nazi’s and has in fact escaped from a Nazi concentration camp. The only hope the duo have to escape to freedom in order for Victor to continue the fight against the Germans is the letters of transit and with the resident German Major Strasser (Conrad Veidt) determined to keep Victor in Casablanca, it falls on Ric to decide whether or not he will set aside his personal feelings in order to aid a war effort he has no part in.

The love triangle between Ric, Ilsa and Victor is one of Hollywood’s finest romantic tales. We start off with two star crossed lovers who experience a whirlwind romance in Paris as they wait for the inevitable German invasion, only for Ilsa to leave Ric alone in the rain at the train station with nothing but a letter to half-heartedly explain her departure. Ric is broken hearted and becomes a shell of his former self losing his happiness and his will to fight in the process. Ilsa and Victor were in fact married when she and Ric were together but she thought he had died at the hands of the Nazis. When she learned he was alive, she rushed to his aid. She is the thing that keeps him going, without Ilsa, Victor himself would not be able to continue his fight. This is what adds to the drama surrounding Ric’s difficult position. Is he willing to set aside his grudge against Ilsa in order to help her husband and in doing so help the resistance fight against the Nazis.

The film as a whole is of course far more than a Romantic drama. The film was made as the war in Europe was at its peak and the Nazi’s were steamrolling across much of the continent. Ric is of course symbolic of America as a whole. Up to this stage remaining neutral, they are both at a point where they must make a vital decision. Do they join the good fight and help their European friends? Or does they sit back and play no part, perhaps thus handing the war to the Nazi’s? Casablanca is also fairly critical of the Vichy French government regime. The Vichy government is symbolised here by the morally questionable Louis and the official is shown continuously bowing down to Nazi pressure and being at the beck and call of the German officers. At one stage, a bottle of Vichy wine is rather unsubtly tossed into a trash can for good measure.

The film wasn’t just meant to convince Americans of the need to pick a side; it was also designed to boost morale in beleaguered European countries. One telling scene sees the Nazi’s loudly singing ‘Die Wacht am Rhein’ a Nazi party anthem in the bar, much to the chagrin of the rest of the clientele who sit in grudging silence. Victor strides over to the house band and instructs them to play the free French anthem ‘La Marseillaise’. In a defiant act of patriotic fervour, the international customers join Victor in belting out the song which drowns out and ultimately shuts up the German officers. This rousing moment was not only a clear indicator of Victor’s importance but also of the need for boldness and unity from not just the gathered customers of Ric’s, but also the viewers back home.
As world weary Ric, Humphrey Bogart delivered a career-best performance and produced one of the most iconic characters in screen history. Whether he’s stoically rising above the German officer’s attempts to scare him with their file (“are my eyes really brown?”), emphasising his neutral nature (“I stick my neck out for nobody”), or simply lamenting on his lost love (“Of all the gin joints, in all the towns, in all the world, she walks into mine”), Ric just exudes a nonchalant cool. Rarely seen without scotch in one hand and cigarette in the other, he is the archetypal man’s man of his age. Claude Raines is suitably charming yet unscrupulous as Louis (“realizing the importance of the case, my men are rounding up twice the usual number of suspects.”) The rest of the cast are all note perfect in their roles too and Ingrid Bergman cemented her place as one of the all time great screen beauties with her dewy eyed turn as the torn lover of two great men.

What really makes the film so great though is its truly impeccable script. Witty, wry and occasionally cutting, there are so many great lines that it’s no surprise that Casablanca possesses an unprecedented 6 entries in the AFI’s 100 greatest movie quotes of all time. There’s the legendary ones that have become part of culture itself, “We’ll always have Paris” or “ Louis, I think this is the start of a beautiful friendship”. Yet there’s also some brilliant one liners which wouldn’t be out of place in the finest comedy screenplays of the time. The script crackles with great zip and verve and some deliciously cynical comebacks.

Some personal favourites include:

Rick: And remember, this gun is pointed right at your heart.
Captain Renault: That is my *least* vulnerable spot.

Major Strasser: What is your nationality?
Rick: I’m a drunkard.
Captain Renault: That makes Rick a citizen of the world.

*SPOILER ALERT*
If you’ve somehow managed to avoid learning how Casablanca ends, a feat in itself, than stop reading now, for the films denouement is part of what makes it so special. As the film races towards its climax, we are still no the wiser as to what Ric will decide to do, will he opt for his own happiness or for the greater good? At an airport shrouded in fog (always a bit strange in the desert), we ultimately learn that Ric has of course done the noble thing and makes the ultimate sacrifice of his own happiness in order to let Ilsa and Victor escape. As a teary Ilsa looks to Ric, unsure herself if she can leave him again, our hero looks her in the eye, wipes away her tears and mutters the immortal line, “here’s looking at you kid.” With that, Ilsa leaves Ric once again, flying into the night sky to continue the good fight. Ric remains broken hearted but revitalised in Casablanca, once again committed to the cause and willing to stick his neck out to help others.
Casablanca brings together the best bits of drama, melodrama, comedy and war movies and the end result is a moving film which truly rewards on repeat viewings. It’s a truly timeless film which represents the very best of Hollywood’s golden age.