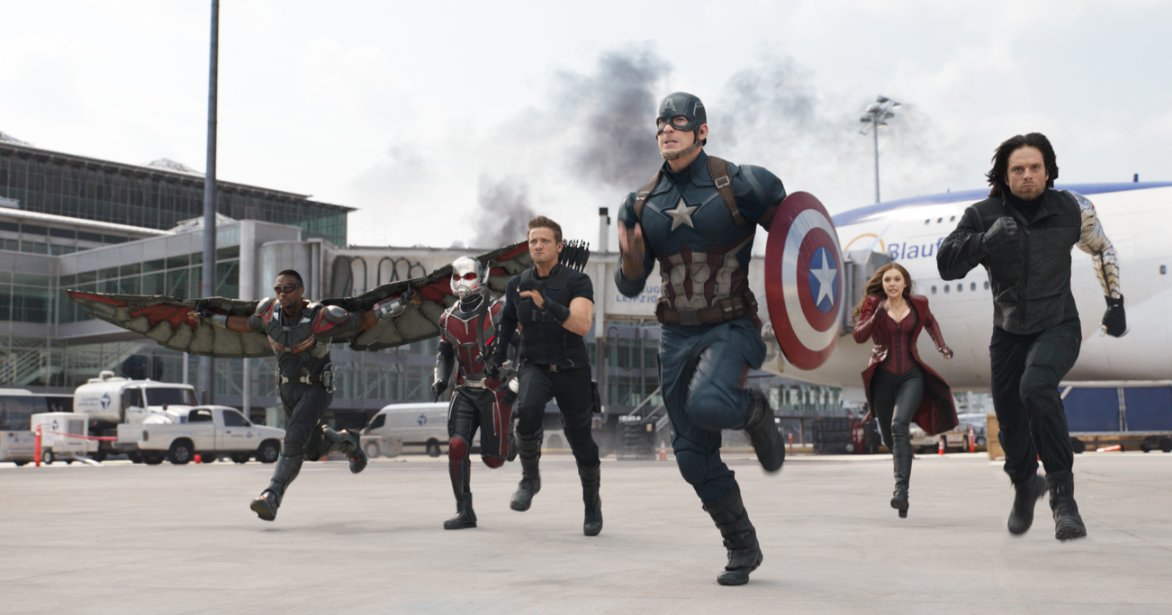 Oh, per-lease!  It’s only two weeks since Bats and Supes were throwing their toys out of the pram, and now Cap and Iron Man are at each other’s throats.  And, unless it’s my imagination, their posters are remarkably similar as well.

I’d tell them to sort themselves out, but somebody got there before me.  Once you get past the posters, the similarities come to an abrupt end and the two mega-movies part company.  Better still, “Captain America:Civil War” stands head and shoulders above Snyder’s “Batman V Superman”.  He might want to take a look at this latest from Marvel to see how it’s done.

Cap and the crew leave Batman and Superman in their wake as soon as the premise for the film is laid down.  There’s no personal animosity between Iron Man (Robert Downey Junior) and Captain America (Chris Evans), it’s more a matter of politics.  An accident, caused by one of the Avengers, kills innocent civilians and puts the super heroes right in the spotlight, prompting political pressure for them to be more accountable.  Iron Man agrees, but the more idealistic Cap doesn’t, splitting them down the middle into two factions.  Falcon (Anthony Mackie), Hawkeye (Jeremy Renner) and the Winter Soldier (Sabastian Stan) stand shoulder to shoulder with Cap, while Iron Man has Black Widow (Scarlett Johansson), War Machine (Don Cheadle) and Vision (Paul Bettany) on his side.

But it isn’t just a case of the usual suspects.  There’s new faces on both sides, some familiar, some less so.  Black Panther (Chadwick Boseman) joins in as part of his quest to avenge the death of his father. He purrs his lines and has a manicure like a mini Wolverine.  Ant-Man (Paul Rudd) joins Cap’s team with typical enthusiasm and demonstrates that his talents extend to growing a whole lot larger as well.  Ant-Man in Wonderland, if you like.  Most sensationally, there’s the first sighting of the new Spider-Man from Tom Holland.  Still at school and with a very glamorous Auntie May (Marisa Tomei), he’s struggling to work out how to use his impressive powers.  He’s also been gifted some of the best comedy lines in the film and comes perilously close to stealing the whole thing from under the noses – and masks – of the more established members of the cast.  And it sends expectations for next year’s “Spider-Man:Homecoming.”

And this is a film that knows how to make good use of humour, and balance it with both the action and the more thoughtful side of the story.  There’s a point when it looks like it’s starting to fall into the trap of taking itself too seriously.  Not a bit of it!   Out comes the humour, bang on cue, and there’s just enough to lighten the mood.  Falcon’s aim has always been pin-point accurate when it comes to puncturing Cap’s tendency to be just a wee bit pompous, but now we have the youthful exuberance and cheekiness of Spidey and Ant-Man with his tongue firmly in his cheek.  There’s also the customary cameo from Stan Lee, this time with a great gag about Tony Stark’s name.  It can’t fail to run into the next episode in the franchise.  It’s simply too good to waste!

As for whether they settle the argument… well, that would be telling.  But “Captain America: Civil War”, is a winner, regardless of whether you’re Team Cap or Team Iron Man.  There’s humour, energy, relentless action and, at the same time, it skilfully walks the tightrope of combining all that with something more thoughtful.  It’s what a super hero movie should be.