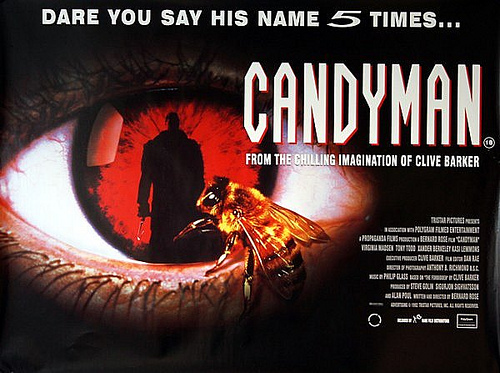 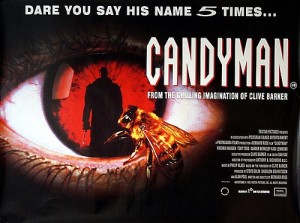 Making the switch across the pond from a Liverpool housing estate of Clive Barker’s short narrative ‘The Forbidden’ to Chicago’s Cabrini-Green projects, Bernard  Rose’s underrated 1992 film Candyman tries its hand (or hook rather) at a relatively  untapped horror source of the time: the urban legend. And in doing so, the film inaugurates horror’s first African American villain.

Ok, so we could view Candyman as just another slasher. Just a different flavour in the Halloween imitator cookie jar. Candyman himself could just be Michael Myers with a hook. Krueger in a fur coat. A bee (not bat) loving Dracula. But both Barker and Rose provide the filling for a cavity in the horror genre in the form of a concept that has existed long before Bram Stoker put ink to paper: folklore. It’s a mode of storytelling popular throughout the ages and Rose impressively combines this history and tradition with the contemporary.

The film follows Helen Lyle (Virginia Madsen), a graduate student who, along with friend and colleague Bernadette (Kasi Lemmons), begins conducting research for a thesis on urban legends, during which she learns of the legend of the Candyman- a hooked son of a slave who, if his name is chanted five times in front of the mirror, will appear and murder those around you.

Visually and aurally Candyman is nothing short of fascinating. The film’s extensive use of colour sweetened with Phillip Glass’ score is both eerily beautiful and distorting of our perceptions. In true Elm Street fashion (although perhaps more subtly) we are forced to view a seamless transition between reality and the surreal with an absence of distinction between the two. Unlike Craven’s film however, this ploy is used to possibly question the sanity and indeed the ‘goodness’ of our supposed heroine. In essence, Rose captures perfectly our fear of superstition and the overriding question of ‘do we believe?’. But it is perhaps Candyman himself that is Rose’s most profound creation. Hard to contemplate that the apparent first choice was none other than Eddie Murphy. Talented as he is, it is hard to see Candyman as anyone other than Tony Todd’s bassy voiced, bee loving, hook-for-a-hand killer. He is the personification of postmodern horror in the 90’s and provides a further blurring of our perceptions of good and evil. Candyman is both the villain and the victim; the link between African American history and modern day. Thus, ultimately, we are asked if the true horror derives from the on screen bloodshed or perhaps a much larger, cultural issue.

Perhaps more fascinating and profound in its ideas, questions and visuals than its plot, nevertheless, Candyman is essential viewing for the avid horror fan. It’s far from perfect but one thing is assured, whether or not you buy in to it all, it will keep you hooked. Go on, we dare you to say his name five times.

Night Of The Living Dead