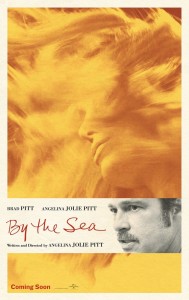 It’s clear there is a driving force of sorts behind Angelina Jolie Pitt’s (who I’ll simply refer to as Jolie throughout this review because I’m not typing Jolie Pitt three hundred times) writing and direction, it’s just not clear what that force is. While I never saw her debut, In the Land of Blood and Honey, last year’s insanely promising but ultimately disappointing Unbroken more or less set the prospects for any future Jolie pictures to that of being hopeful, but not necessarily optimistic. While the less than enthusiastic response to Unbroken must have been a blow to not only the writer/directors ego, but to the faith she has in herself and her abilities it seems her reaction has been to return to the forum with a much lower-key project, inspired by the films of yesteryear and containing only a select number of characters. Jolie sets her film in the seventies and then isolates her characters to a French Riviera where this character study is almost forced into existence. Taking the idea of a strained marriage and somewhat bravely allowing such a dysfunctional portrait to be painted with herself and real life husband Brad Pitt in the roles Jolie goes for a restrained and bleakly artistic look at two people at the end of their ropes for reasons we’re not exactly clear on. In fact, while I can appreciate a good slow burn, By the Sea is such a staggering epic of quietness and indulgence that the boredom overtakes the measured emotions by the time the twenty minute mark hits. The problem is the quiet characters and their inability to communicate make it difficult for the viewer to find anything interesting or worth investing in about them and thus the patience wears thin before the film ever glimpses it’s portions that might seem interesting. There is a good movie in here somewhere, no doubt, a wholly engaging film about the natural dynamics of a seasoned couple and how the dealings of going through something unbelievably difficult while initially testing their bond might eventually lead to an even stronger one. Unfortunately, By the Sea is too generous with the amount of time we spend with this couple and too tedious in the events it depicts to be that film.

Beginning with Roland (Pitt) and his wife Vanessa (Jolie) arriving at a seaside hotel we are introduced to a starkly quiet couple that immediately make themselves cozy with the bartender (Niels Arestrup) downstairs at the café while they hardly speak once they get into their room. The tone is immediately set as France during the mid-1970’s is a color palette of yellows and browns with the only breaking of this barrier being the lush turquoise sea outside their upstairs window. The tone between Vanessa, a former dancer, and Roland, an American writer, is immediately set as well given the moment they enter their room they rearrange the furniture to fit one another’s needs. They no one another well enough to not have to speak, but it’s clear a discussion needs to be had. Roland’s typewriter is set up just in front of the window while Vanessa immediately takes to lying in bed for long periods with no hint of a plan to leave the room. They seem to be a couple who enjoys their leisure and utilizes their flexible careers (though Vanessa has long since retired due to nothing more than her seeming age) to travel the country together for extended periods of time, but as we come to know the couple we realize their relationship is barley holding itself together. To say they seem to be growing apart is something of an understatement as Vanessa is in pain, but won’t let anyone in and Roland is desperate to reconcile the love they once shared. In the wake of Vanessa completely shutting him out though, Roland has turned to the drink and worse, seems to be suffering a case of writer’s block. It is when they linger in this one quiet, seaside spot that they begin to draw on inspiration from their newlywed neighbors (Mélanie Laurent and Melvil Poupaud) in ways that could both irreparably damage their relationship or give cause for a new spark in their story. The destination is not always obvious given the stressed dynamic between the two, but the journey isn’t consistently appealing enough to make that destination worthy of our attention either.

The worst thing about By the Sea, beyond the issues with boredom and over-indulgence, is that it purports to be really trying to say something and in the end it just doesn’t connect. If one is paying attention (and trust me, that’s hard to do sometimes) they can glean what Vanessa’s issues are within the first twenty minutes of the film and so the remainder is simply waiting for the tension between she and Roland to boil to a point where they might finally say something about it out loud. Jolie takes her time by treating audiences to an hour’s worth of exposition that shows how little the couple care to be around one another while on this beautiful vacation. Roland comes and goes as he pleases, becoming good friends with Arestrup’s Michel while occasionally attempting to talk with his wife to no success. Vanessa, remaining largely cooped up in their room discovers a hole in the wall where a pipe once occupied the space that allows her to see into the neighboring room. It is here she becomes somewhat fascinated with the sexual escapades of Lea (Laurent) and François (Poupaud) as they tend to be making love any time they’re inside their room given they’re on their honeymoon. The longing for this type of connection by Vanessa is clear in the way Jolie positions her eyes and by her body language afterwards. Why she won’t allow Roland to play such a role in her life is still a mystery though. And thus, we have come full circle to that critical issue with the film in that it desperately wants to be a character study of these two contrasting personalities around the same issue, but also wants to play things so subtly that neither approach wins out and what we’re left with accomplishes nothing that I imagine Jolie set out to capture. It’s evident that Jolie is digging here, searching herself for what unique angle might be found within this simple set-up and there are clearly themes and ideas she is intent to explore so as to make a statement that not all things are as they appear, but if any of this is true her latest piece of art is simply something pretty to look at with no weight to the proceedings and nowhere near the amount of depth she seemed to hope it might have.

Where By the Sea does indeed stand to be intriguing is that it does in fact star two of the biggest stars on the planet who are actually married and who typically remain quite mum about their private lives. For Pitt and Jolie to so boldly make a film about the trials of marriage is interesting on the basis of purely seeing them interact with one another in this environment and the idea that this is some kind of weird kaleidoscope into their personal lives. Of course, only a rock solid and assured marriage would be able to go to the lengths that are necessary to act out the issues on display here or to even have such conversations which essentially render the idea this is based on their actual marriage mute, but nonetheless it remains the single point of intrigue. Per usual, the two are rather charismatic screen presences despite having little to do. Pitt is playing a desperate drunkard of sorts that has reached a point of helplessness that it’s the only reason we stand to care about what has happened and why his wife has shut him out. To stick around and endure such seeming hate is taken to mean Roland is a good man and as Pitt portrays him there’s reason to believe he’s only drinking as much as he does so that he might not care as much. Jolie positions her Vanessa as the victim though. Vanessa is a woman who is clearly full of angst, but by the way Jolie is able to convey her willingness to look into the unknown we come to understand she might be more adventurous than first impression would have us believe. This is presumably the woman Roland married and the one he’d like back, but the point of the film is to understand the journey Vanessa has endured that has created this elegant yet reserved woman who is afraid of the world despite being curious. Laurent and Poupaud display an ideal couple for Vanessa and Roland to take note of, but they aren’t full formed characters. Jolie puts the sole focus on her and her husband’s portrayals and while both are fine enough they, like their movie, simply don’t say enough-or anything-that makes us care.