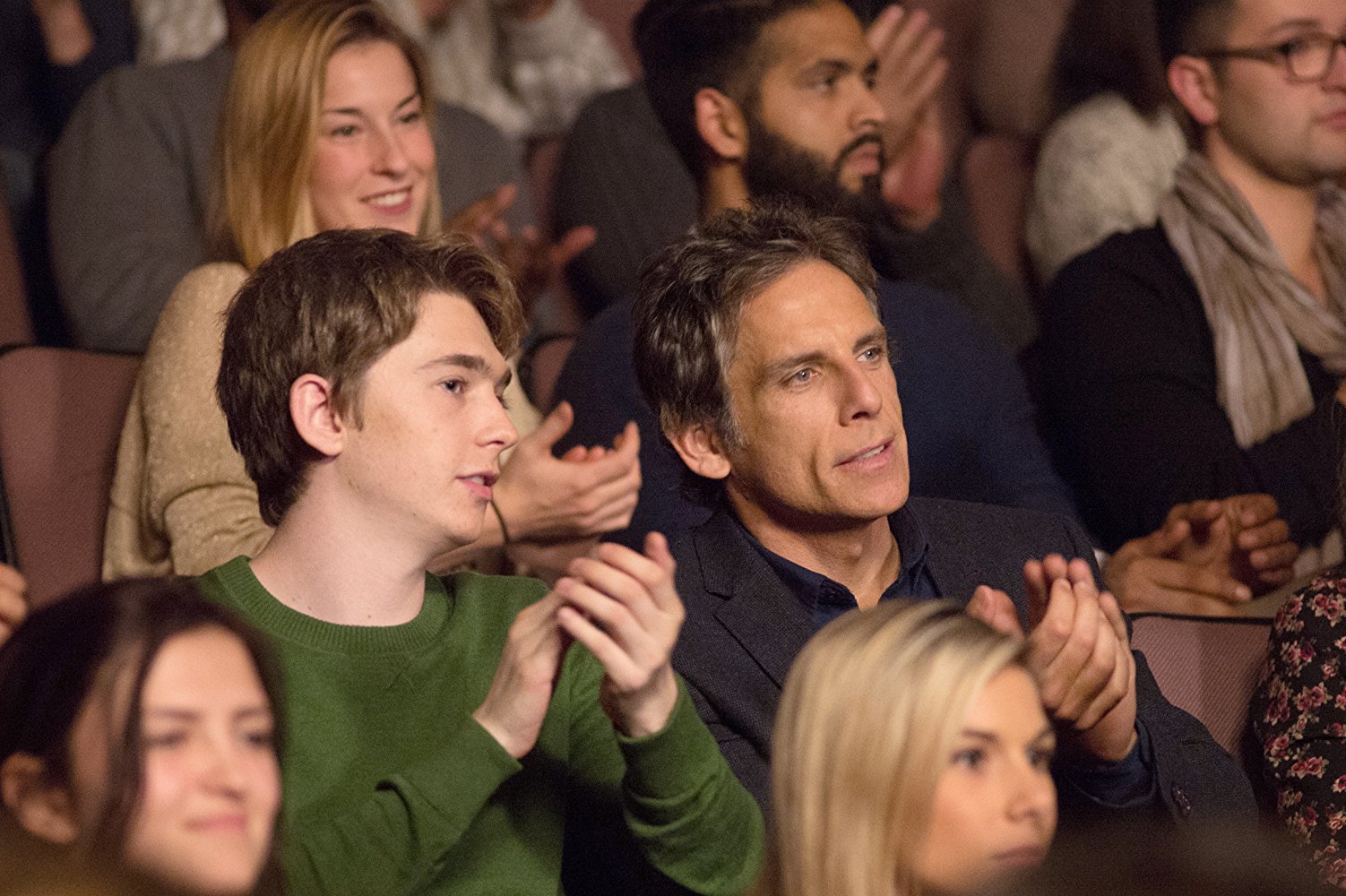 Once one of Hollywood’s biggest comic actors, but now better-known for his more serious, character-driven dramadies with the likes of indie favourite Noah Baumbach, Ben Stiller continues his mid-life career introspection with Brad’s Status, the story of a fortysomething man who questions his success in life during a trip to Boston with his teenage son to visit universities.

Brad Sloane (Stiller) is 47, owner of a non-profit organisation, happily married to a loving wife, Melanie (Jenna Fischer), and father to budding 17 year old musician Troy (Austin Abrams). Brad’s content enough with his lot, but feels as if he hasn’t lived up to the expectations he had when he was younger, nor has he become as successful as his former uni friends, all of which have become powerful or wealthy. During a trip to Harvard University with Troy, Brad ends up having to call on the help of Craig Fisher (Michael Sheen), one of his old friends who’s now a big name in politics and an occasional professor at Harvard, to get Troy an interview he’s missed.

This is a role Stiller has done before – most notably in Baumbach’s While We’re Young – but it’s one he is genuinely really good at. Brad is someone both in awe of an envious of his old friends, who is determined to push his son for greatness so he can feel like less of a failure himself. He’s pathetic and sympathetic – he’s in the midst of a mid-life crisis and is desperately trying to fill a void in his life, but you do understand him and come to kind of like him. Stiller conveys this fantastically, especially in Brad’s inner monologue that narrates the film, although it’s virtually the same character he played in While We’re Young – a middle-aged man jealous of someone with the life he wishes he had.

At times, Brad’s Status plays like While We’re Young with the humour removed – a scene of Stiller venting to one of Troy’s friends could easily have been a deleted scene from the Baumbach film. This isn’t quite as well-written as that film either – Brad and Troy spouting f-words left and right during casual conversation with each other felt really unnatural. This is quite early on though – the dialogue does get better as the film progresses, with an extended scene in which Brad and Craig meet up once again after over a decade being one of the highlights. Sheen’s performance as the self-centered, insensitive political commentator/professor who was once such a close friend of Brad is one of his best in years, and this one scene alone proves what a great actor he is. Craig’s happy to help out his friend’s son, but he’s far from the professor you’d want delivering your lectures.

Austin Abrams as the promising musician son is perfectly fine, but Jenna Fischer and Luke Wilson (as a high-flying businessman who was also a chum of Brad’s at uni) are unfortunately given very little to do, and writer-director Mike White turns up in a few fantasy sequences as another of Brad’s old friends, also pretty much marginalised. And the fantasy sequences – there’s way too many of them. Brad’s narration works well, although the imaginary interludes, while not wholly unnecessary, occur too often and add little to the plot overall.

This really is Stiller’s show, with Sheen as the supporting act. Both of them are really good here, but unless you’re an ardent fan of either actor you’re better off watching Stiller’s work with Noah Baumbach – he’s capable of straddling serious and comedic at the same time, as he does well here, although in Baumbach’s films he’s given stronger material to work with.