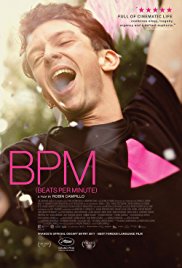 “ I see how AIDS has changed my life. It’s as if I lived things more intensely. More color. More noise. More life. “

By the 1990s, AIDS had already claimed countless lives for more than 10 years. The Paris based activist group, Act-Up accumulates actions to fight general indifference.  BPM (Beats Per Minute), the newest film by French director Robin Campillo was met with standing ovation at Cannes last May and even brought home the “Grand Prix”.

The film starts when Nathan, a young newcomer decides to join the group. Nathan is not like the others. He is shy, naïve and slightly laid back until he volunteers to participate in Act-up’s next intervention led by Sean, radical but charming activist that will change his life forever.

The members of Act-up Paris are diverse and have different relationships to AIDS. Many are infected homosexuals but others are lesbians, transsexuals, HIV positives, HIV negatives and even the heterosexual mother of young infected teenage boy.  They all burst with energy but like in any other organizations, they may hold the same goal but different views quickly spread within the group and increasing frustration inevitably pull them apart.

The film’s mirrors Sean’s fight against AIDS and Act-Up’s continuous action against the public’s ignorance.  It starts vigorously with pleasure and colourful scenes of dancing, meet-ups, sex and a natural shot of raindrops and leaves. Nathan meets Sean and they falls in love.  Sean starts to get frustrated and angry, as he demands more results and less pointless violence from the group’s many interventions. Years pass and the disease settle inside and festers while Sean slowly separates from the group. He isolates himself with Nathan in empty trains and desolated beaches.

The film’s strongest weapon is Nahuel Perez Biscayart’s heartbreaking performance.  Infected at 16, the first time he had sex, Sean struggles with the disease for nearly 10 years. Perez Biscayart goes from passion, determination and surrender with the same sincerity and intensity that almost feels natural.  He fills all his scenes (particularly the intimate ones) with so much warmth and energy that it will affect anyone.  Playing one of the lead activists, Adele Haenel is captivating and captures, to herself, Act-up’s never ending determination.

BPM is not a documentary and yet avoids all the dramatic narrative tricks to create a real honest feel. It first reminds us of the entire movement that started in the 1980’s to spread awareness of AIDS/HIV and to demand better access to treatment and dives into the inner workings of one of the many activist groups that led the movement.  Using his own experience with ACT UP Paris, Campillo never avoids bleak details and constant reminders that death or at least the possibility of death was always there (the scene in which Act-Up dumped red liquid into the Parisian Seine was intended but unfortunately never pulled off).

The central relationship between Sean and Nathan draws us in both fights from the start but if that relationship started vigorously it quickly starts moving towards a slow and anticlimactic ending, almost foreseen. When Sean dies, a few of his friends come over to make coffee but already they move on to the next step, a political use of his ashes.

Although set in the 1980’s there is nothing about BPM that does not hollers in the present sense.  The performances are vividly fresh and we get the overall feeling the film is not so much about bringing new facts to light but finally seeing through them. It is just like those particulars of dust that surround the film.  Only visible in the light, most choose to ignore and simply live with.

If the best films are the ones that come from within, Campillo certainly made this one personal.

“AIDS is a war, a war invisible to others.”

Related Topics:120 BPMBPM
Up Next