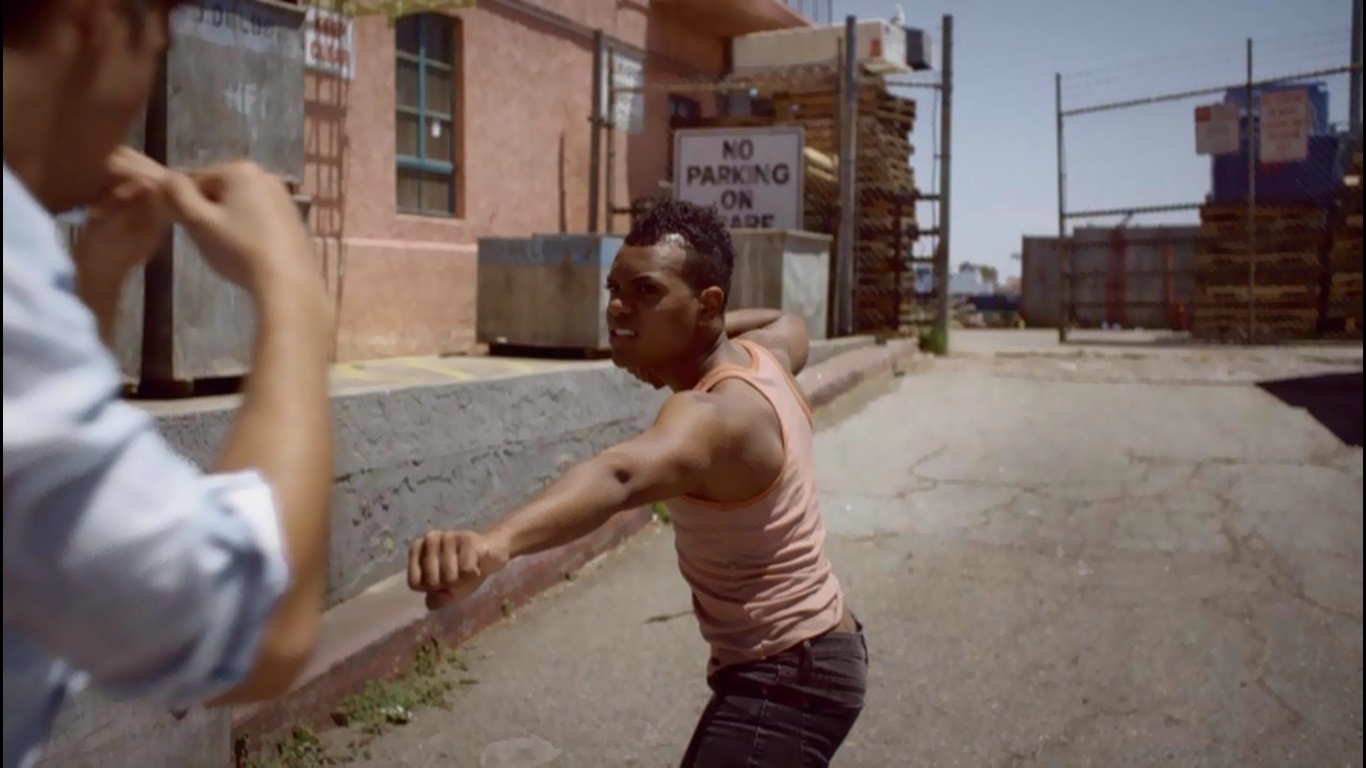 Boys On Film: We Are Animals 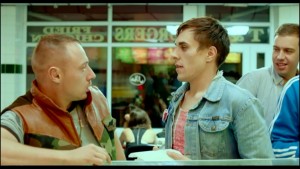 On the other side of the milestone that was X, we move onto We Are Animals, the 11th collection of Boys on Film from Peccadillo Pictures. I truly love the title of We Are Animals (which is taken from one of the shorts). It’s the truth, though some like to picture us as being separate from, or above the animal kingdom. This plays into the common thread within these shorts of giving into human nature, our natural desires and urges; being who we are; or alternatively denying them. It’s a premise with power, but one which can be approached from multiple angles.

What better way to start than with the short which the collection derives its name from: We Are Animals – an intriguing short set in an alternate 1980’s where the reaction to the AIDs crisis has been extreme. I love alternate history with the what ifs and the power of turning points (which are usually only seen in hindsight). It’s a powerful sub genre of sci-fi which is explored across various mediums – this is my first taste of LGBT alternate history though. How would I describe it? Brilliant. It quickly sets up the world which creates the questions in your mind to hook you in. At it’s very core is the idea of giving in to our primal desires (as shown by the tribal/ritualistic nature of the Pink Panthers). It confronts the notion of conformity head on and delivers on every point from the use of inter-cuts to the use of sound and is difficult to pick fault with.

You know what they say, “once you kill a cow, you gotta make a burger”. Yes. That is my link between We Are Animals and Burger, and I’m not apologising for it. It’s just that I don’t have much to say about Burger. I mean it’s not bad and it does what it does rather well (creating a documentary-esque feeling through the characters’ dialogue and action) but it barely progresses into anything and the ending just raised concern. In terms of whether it fits with the title of the collection… well I suppose you could look at it as different animals or tribes coming together around a water hole. In that regard, it fits. It just didn’t excite me.

From Cardiff to Alaska… which is colder and wetter? Anybody know? Now where was I? Yes, Alaska Is A Drag. A near perfectly balanced comedy drama that had me hooked from beginning right through to the end. Everything was set so effortlessly that it was difficult not to be hooked into the world created; one of non-conformity against a pack of ‘animals’. Leo is only true to himself and being such a character, who also doesn’t conform to stereotypes, makes you want to root for him. Along with the “love interest” slot being taken up by a “best friend interest”, the whole thing was refreshing. My only quip was that it was too short, though, to my relief, a feature length version is in the works and you can donate to it on Kickstarter!

What’s summer like in Alaska? Well how about three summers in Denmark? Last summer, this summer and next summer? Well that’s the Three Summers you’re given in this short. I for one don’t understand the set-up; why are we going into the future? It doesn’t make sense to me. On top of that there was a disconnect between the tone and message of the story; is this a comedy or a drama? The score confused things even further and then came the pivotal sexual encounter (which was probably the best scene). There’s the whole desiring an older man, giving in to temptation and the notion that a horny straight guy will f*ck anything – they’re animals – but I didn’t care enough for any of the characters to be moved at any point, despite what could’ve been dramatic and tense scenes.

So we’re looking for tension, yes? Well thank God for The Last Time I Saw Richard – though God cannot protect you from all of your demons! Is that a spoiler? I don’t think so because we all have inner-demons, but when we mix that with mental health issues, what’s real and what isn’t? This blurred line is what hooks you into this short and, in my opinion, it provides everything I love about horror and sci-fi in an amazing condensed package. Everything from the cinematography, the score, the execution, the story to the performances encapsulated me in this creepy, tense, eerie world which I wanted to delve into. If a film makes me jump, it gets bonus points. If a film makes me want to shout at the screen it gets even more bonus points. But I’m getting carried away with saying how perfect and beautiful the final product is, and haven’t delved into the links to the collection title. There must be some. I need there to be some. Well, I suppose what’s more animalistic than the side of us that we cannot control, the side of our psyche which makes us susceptible to mental illness, the side that lets the demons in?

If demons exist, then does God exist? If so why does it have to monotheistic? What about the Greeks and Romans? What about… Cupid? Think I’m getting lost on a tangent? Stick with me. Little Boy on the surface seems to be about a guy with commitment issues confronting a stalker. However, for it all to make sense that stalker must be Cupid (or something similar). This also raises a lot of questions but ones that are more plausible when in the realm of fantasy than the ones that were raised by him merely being a human stalker. If this is true, this short is elevated to being above average. It creates tension well but beside that isn’t wholly original without him being Cupid. So if Cupid is real, that must mean that there is a word beyond the animal kingdom and that man may truly be above it, right? Or this short just shows that we can’t escape our own flaws and pitfalls – we are who we are and that might just screw up our chances of finding love. How cheery!

Every so often a short comes along which stands out, not necessarily on its merits, but definitely on the issues it tries to address. For Dorian is one of those, though it’s also rather good too. The question of representation in the media typically revolves around gender, race and/or sexuality. I’m not sure how to say this in the most politically correct way, but those with disabilities are often left out of the discussion. Times are changing (as seen by the casting of an actress in EastEnders for a role which wasn’t written with a disability) but as a whole it’s moving slowly (as with representation of Trans, though Cucumber/Banana did well in that respect) and I can only speak from a British perspective. So where does Dorian fit in? He’s gay and he has Down Syndrome. What is nice is how neither are majorly played upon; they’re just who he is. He cannot change who he is and he doesn’t try to conform to society. It is his father who is faced with issues when he realises that his son is growing up – I suppose he is over-protective and forgets for a moment that Dorian is just like any other person, no one took advantage and made him gay. And who cares if Dorian gets his kicks from the weatherman? It’s natural! It’s all handled brilliantly, which makes for a heart-warming and satisfying ending.

What is one thing that is inappropriate for a father/son to do? Spooning of course! (What a lousy link) *grumbles* Let me try again… erm… a good nights rest is good for the mind and the body, right? Well that means you need to a good mattress, and that’s certainly not what these guys have at the beginning of Spooners (I guess that’ll do!). So what do you do when you need a mattress? GO SHOPPING! Though what if your partner is slightly uncomfortable with the idea of mattress shopping as a couple? Despite him being your “husband”? Well this whimsical and original short explores that concept through the wizardry of a smart bed, which reveals that no one really gives a damn whether you’re gay, big spoon, twinky or submissive – it’s a hoot, with some great lines and visual comedy. And it’s link to the title of the collection… well I was going to do down the route of animals making nests and such but seeing as the short is a comedy, it’s link is the fact gays have an affinity with woodland creatures and that’s why we use terminology such as bear, cub and otter.

The time has come for this review to go into hibernation (well it’s more a death because it’s the end, but that’s nasty imagery!). We have sat through another collection, well, I have… and some of you just read this for whatever reason. I do hope that you watch some of the shorts, if not the whole collection, and broaden your appreciation, knowledge and experience of short films and LGBT+ cinema. So, back to We Are Animals. From the title I hoped for a collection that would be more raw, edgy and boundary pushing. That’s not to say that the collection is bad, because it’s not. There are highlights from the world-building in We Are Animals to representation in For Dorian. It’s a solid collection, even if the connection may be a little lose in places. It is however just my interpretation of how they fit together – no one says that they have to, and for individual reviews, you can check out my blog, Constrained Film Reviews. So where does it rank? That’s getting extremely difficult, but I’m going to put it between Cruel Britannia and Bad Romance.