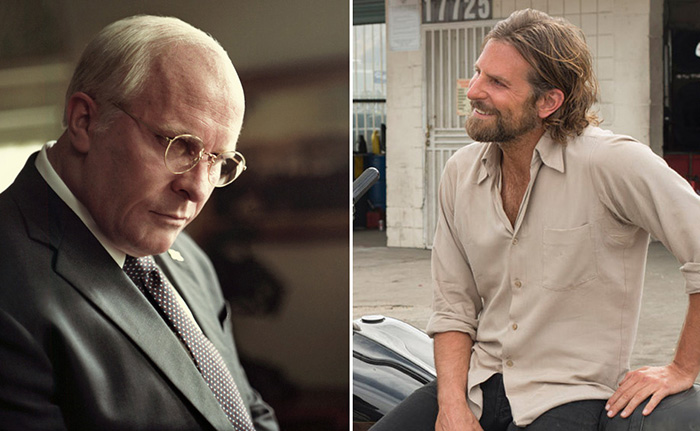 Rumours are presently swirling ahead of the rapidly-approaching January 14th announcement of Oscar nominations, and many insiders are predicting thespians Bradley Cooper and Christian Bale are leading the shortlist for the Best Actor gong.

Cooper is a given, following the commercial and critical success of his passion project A Star is Born, which also stars musician Lady Gaga. The actor has been routinely praised for giving a career-best performance, and in a year in which the Academy already had to can their proposed ‘Best Popular’ category, having a Best Actor winner whose featured performance was seen by a vast swathe of the mainstream moviegoing public is absolutely going to be tempting for the board of voters.

Bale, on the other hand, is garnering awards buzz for his portrayal of Dick Cheney in writer/director Adam McKay’s Vice. Now the trouble Vice faces is, put simply, that it doesn’t release in the US until Christmas day. Now, early previews have been kind to the film, with many singling out Bale’s transformative performance in particular. The actor is no stranger to physical alterations and deep, contemplative method acting, and as such his performance will naturally be the flashier, more obvious choice. But in a drama few will have seen prior to the Academy’s announcements, it’s the timing and politics of the situation that may hold this one back.

Other names being tossed around include Ethan Hawke (First Reformed), Willem Dafoe (At Eternity’s Gate), Joaquin Phoenix (You Were Never Really Here), Robert Redford (The Old Man & The Gun), and Clint Eastwood (The Mule) – the latter two of whom could see themselves earn a legacy win.

If you’re paying attention, however, you’ll no doubt have noticed the glaring issue with these names so far. Given the unwanted attention the ceremony has been subject to in previous years, under the hashtag #OscarsSoWhite, a list of frontrunners with absolutely zero men of colour is undoubtedly sure to draw ire.

The Academy has options; Rami Malek is the obvious choice. Despite Bohemian Rhapsody suffering something of a critical drubbing, even the film’s harshest detractors made note of the Mr. Robot star’s utterly captivating performance as Queen frontman Freddie Mercury. Rhapsody also comfortably falls into the ‘commercially successful’ range that the Oscars will be indisputably aware of.

Others who could see a nod include Chadwick Boseman for Black Panther (which Disney has been pushing hard for), Daveed Diggs for Blindspotting, John David Washington for BlacKkKlansman, If Beale Street Could Talk’s Stephen James, and Creed II’s Michael B. Jordan (the latter of whom would likely pick up the award for Creed II in name only, with the actor regularly singled out as one of the finest performers of his generation, it wouldn’t be outside the realm of possibility for him to be honoured ‘early’ – i.e. before his ‘signature awards role’).

The Screen Actors Guild will soon announce their nominations for the group’s 25th annual awards, and will offer the first indication of which way the Academy is likely to swing on the 12th of December. The Oscars ceremony will be held on the 24th of February.