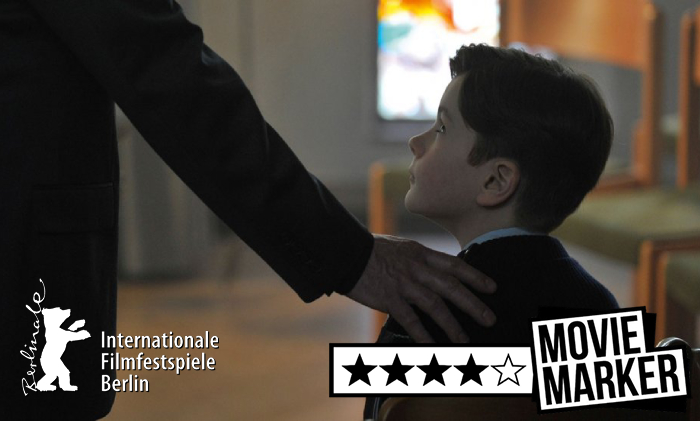 Francois Ozon is a delightfully dangerous filmmaker.  He weaves edge-of-seat tales where characters, though outwardly calm, are forever on the cusp of something deeply uncomfortable. In By the Grace of God, he takes on a highly topical and difficult subject in his usual polished, compelling way – the abuse of children by paedophile priests.

The film is not only topical, but its premiere at the Berlinale and its general release in France on 20th February come just weeks before a legal ruling on the case, which has divided opinion. While many in France believe that justice must be done, there are also many who wish to protect the Church or simply feel that there is no point raking over historical events. By the Grace of God explores tellingly the extraordinary range of views on this, even among fellow survivors and their loves ones.

Sexual crimes can often be misunderstood and especially, wilfully, by the perpetrator.  It’s one of Ozon’s great strengths that in a highly nuanced story, he manages to highlight, without labouring the point, the solipsistic nature of the man who betrayed the trust of so many young boys. His villain makes extraordinary assertions on camera – admitting his actions but not recognising his culpability. A filmmaker’s poetic licence? No. This is drawn word for word from real life.  In one letter the priest at the centre of this film wrote to the father of one his victims, he mentions his dismay at not being given more time before leaving his post, and protests “how can I leave the parish from one day to the next like a thief, after twenty years, when it’s not just wrongdoing that I have committed?”

It feels astonishing that this priest, in all sincerity, believes that the grave crime he committed could be counterbalanced by other deeds – good deeds – rendered to the parish. Ozon, responsible in this film for both direction and script, captures time and again a fundamental cognitive and moral gap.  The priest’s inability to connect his actions with its consequences is mirrored by Ozon’s account of the Church’s response to the victims – admitting there is an issue but refusing to take concrete action, eliding, diverting, obfuscating. They are shown to set greater store by the power of repentance and redemption than their accountability.

The film is brilliantly cast and the subtle differences between all the key players and their families are captured with a degree of precision that is all Ozon. Melvil Poupaud plays a devout family man, Alexandre, a banker with a beautiful wife, home and children, who belatedly wakes up to his childhood reality. He patiently takes on the Church, polite letter by polite letter.  Ozon is a master at this – advancing a gripping story through letters read in voice-over.  This is a device he has used in other films, like his 2016 film, Frantz – stories move forward but lives stall, if only temporarily, in Ozon’s world.

Alexandre is not the only survivor, and all the men affected are different from each other, except in one aspect – regardless of their educational attainment, all are highly articulate – and kind. The film is exceptional in showing all these men as adults, mastering their destiny as they can, and maintaining a grip, somehow, on their closest personal relationships.  There are countless strong scenes, all finely attuned, with very fine nuances. Family arguments, a lawyer robustly reasserting boundaries during an interrogation, a volatile scene between lovers.

There are many lines to savour in this brilliantly cast film. In addition to Poupaud, there are notable performances by Denis Ménochet – last seen in the UK in the terrifyingly real and affecting Custody -and Swann Arlaud, who plays here a man whose emotional pain turns physical. Ozon has engineered something fascinating in the way he brings each of these characters into the story. The sequence of events that leads each to find the others injects a powerful drive to a compelling story well told. Beyond the subject matter, the film is also absorbing because of its structure.

By the Grace of God is an exquisite study of social mores, incisive and detailed. It also confronts head on the contradictions each of us face when we try to reconcile the irreconcilable.  As the film reaches its conclusion, Alexandre’s eldest son asks his father if he still believes in God.  Alexandre smiles quietly and says nothing.