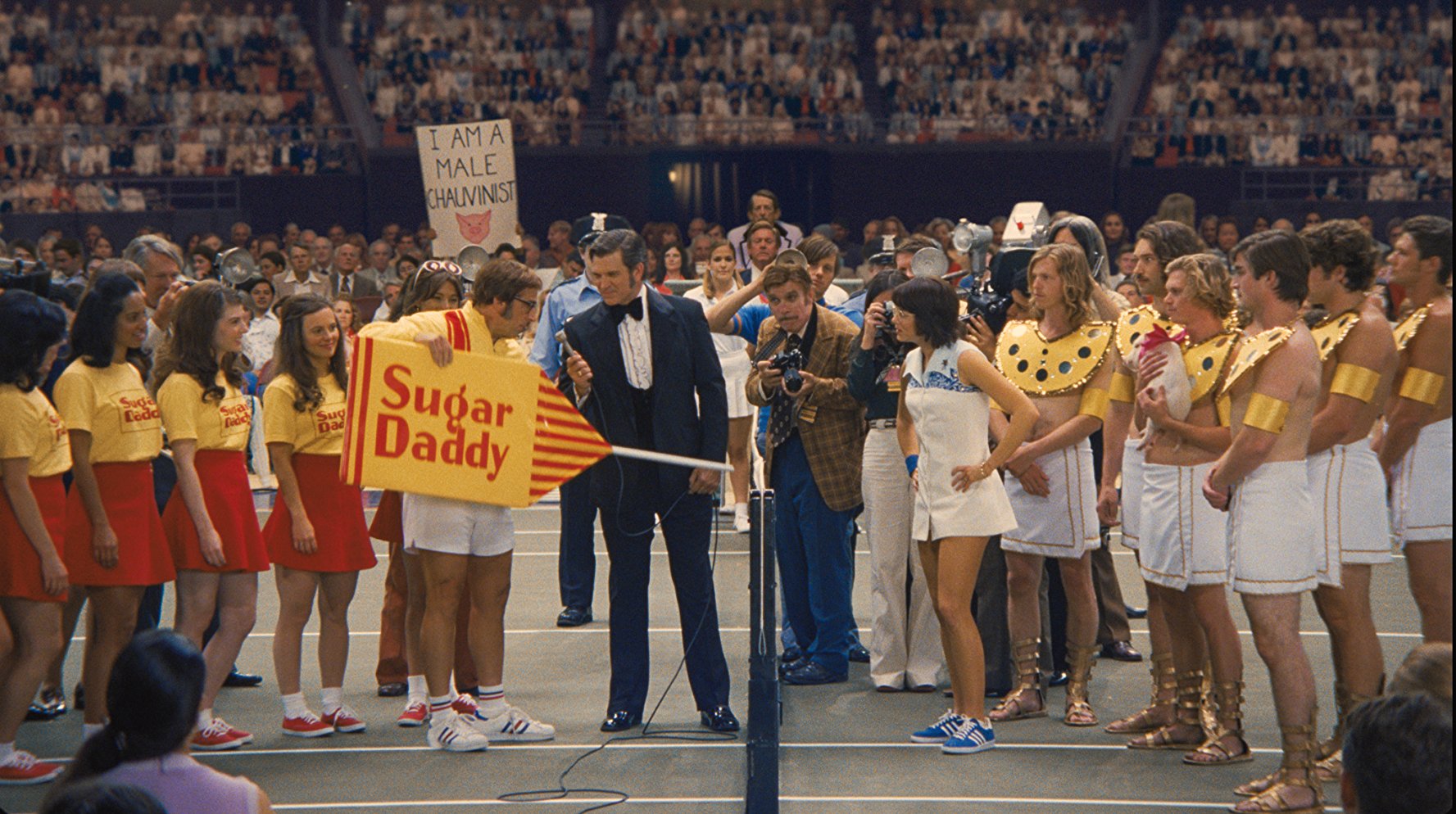 Man versus woman. Or in the obnoxious words of Bobby Riggs. ‘Male chauvinist pig versus hairy legged feminist’. Riggs a frightful and outdated example of the misogyny that has plagued many a sport over the years. In this case tennis, which was only amplified by the harmful media representation.

In 1973, the world of tennis looked to serve an ace through the tenacious World Number One Billie Jean King, as she looked to use her dominance to drastically alter the oppressive and authoritative male minds, who refused to let the women’s game flourish.

Directed by Little Miss Sunshine duo Jonathan Dayton and Valerie Faris. The main attraction of Battle Of The Sexes may be fleshed out in a formulaic fashion, but it’s the rousing exploration of gender politics and sexuality that will likely draw real cheers from its audience.

Riggs (Steve Carell) the fifty-five year old ex-champion turned serial hustler and gambler, living for ludicrous spectacle and trash-talking, only struggling to find the right act or words to win back his wife Priscilla (Elizabeth Shue).

King the twenty-nine year old powerhouse who underneath that tough exterior, cuts an indecisive figure wrestling with her feelings for hairdresser Marilyn Barnett (Andrea Riseborough) and maintaining her pristine public persona.

For all the talk of money scattered throughout its narrative, with King’s own all-female tennis association fighting to be on the same prize-winning level as their male counterparts, along with Riggs’ desperate need to pay off debts. Both deemed this once unlikely encounter, a grand opportunity to enrich their own lives and those around them, for wildly varying reasons.

Through its accomplished grainy aesthetic that truly captures the 1970’s period, directors Dayton and Faris wisely push the inner conflicts that consume these characters, to the forefront of its fantastic first hour. The notorious opinions of tennis rival Margaret Court who immediately questions Rigg’s relationships with women, alongside Bill Pullman’s harmful brand of lower-pay conservatism scattered throughout, aiding the emotional impact of the King/Barnett dynamic.

Fuelled further by the wavy locks of her handsome husband Larry (Austin Stowell), the modern-day parallels drawn of a gay sportsman or woman coming out at the top of their game, in fear of no sponsorship deals or a damaged reputation will undoubtedly resonate. The scenes Riseborough and Stone share really do simmer with tenderness and intimacy, as they look to navigate their loving relationship through tricky territory, emboldening the film’s cause.

With any engrossing tennis match however, faults do occasionally creep into the film’s game in the second half, as it fully embraces the wacky antics of Carell’s Riggs. Certain characterisations (Alan Cumming’s designer Ted and Sarah Silverman’s instrumental figure Gladys Heldman) feel little more than one-dimensional, with their dialogue that looks to inspire, ultimately lacking the subtlety or depth to underpin it.

Thankfully counterpointed by two engaging lead performances and whilst Steve Carell is on exuberant form as Bobby Riggs, this is inevitably Emma Stone’s film, superbly conveying the inner fragility and steely surface that drove Billie Jean King to such triumphs.

Perhaps a little too broad in its intentions to be a true sports great in the cinematic arena. Yet brimming with heart on and off the court. Battle Of The Sexes is a thoroughly entertaining crowd-pleaser.

The Killing Of A Sacred Deer #LFF2017