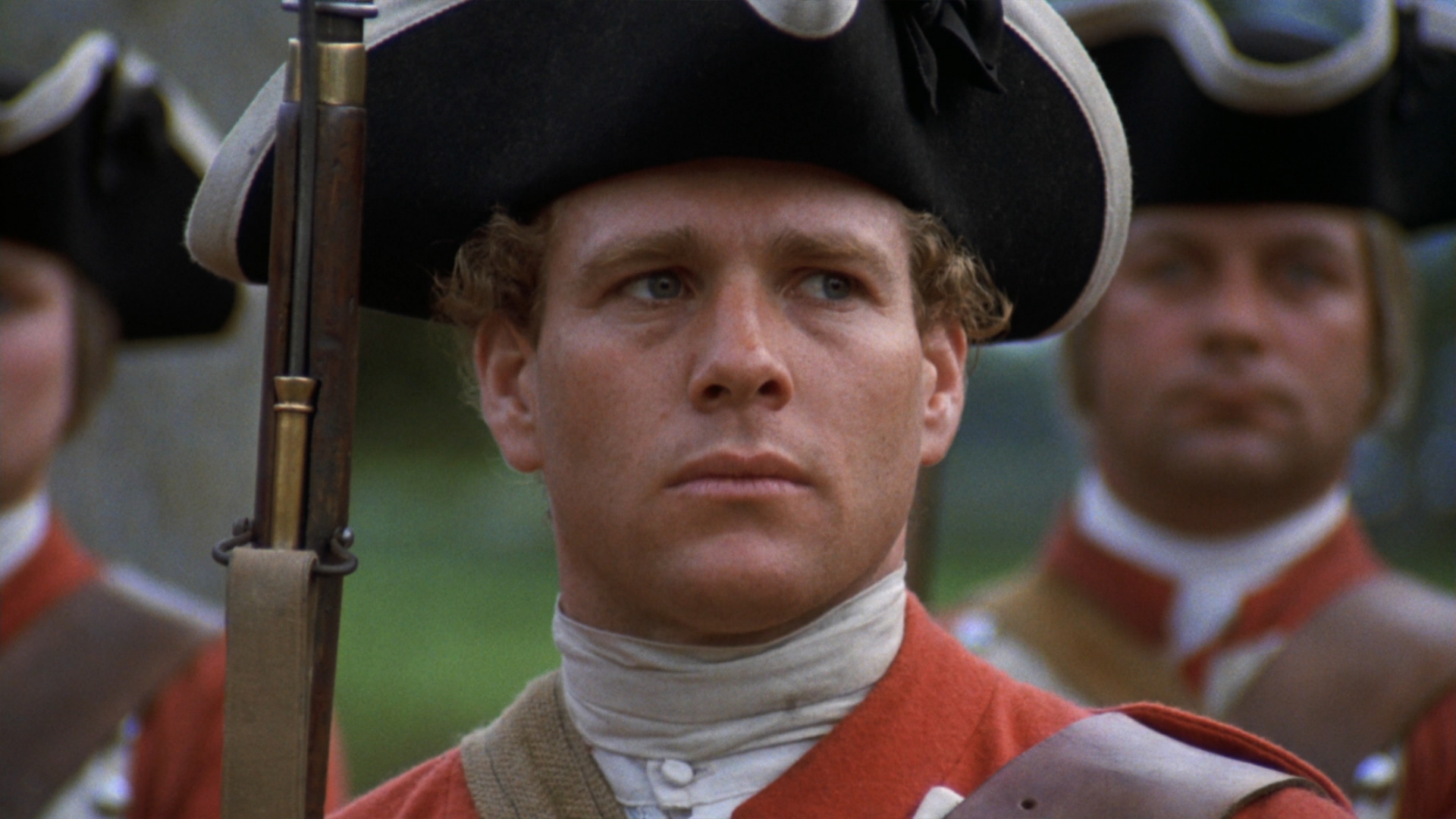 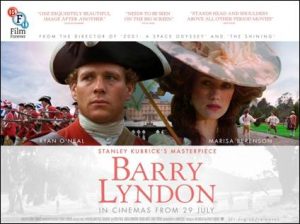 In 46 years, Stanley Kubrick directed a grand total of just 13 feature films.  No ordinary movies though: ‘A Clockwork Orange’, ‘Paths Of Glory’, ‘The Shining’, ‘Lolita’ to drop just a few titles.  And then was Scorsese’s favourite Kubrick film, ‘Barry Lyndon’ which has just arrived in selected cinemas in a newly restored version.

Another book adaptation, it’s based on the novel by William Makepeace Thackeray, who described it as “a book without a hero”.  He should know.  This picaresque tale follows the adventures of country lad Redmond Barry, later to become Barry Lyndon (Ryan O’Neal), who kills a love rival in a duel and has to leave his village.  Robbed of his belongings, he joins the British army, impersonates an officer, is rumbled by a Prussian officer and joins their army instead.  Once the war is over, he travels around Europe with the Chevalier de Barbari (Patrick Magee) running gambling parties for the rich.  And it’s there that he meets Lady Lyndon (Marisa Berenson).  They marry after the death of her husband and have a son, but it’s never an easy relationship.

It’s a film that positively screams to be watched on the big screen.  The visuals are spectacular, stunning and intricately exquisite.  Some are lit by candlelight – so ‘Wolf Hall’ wasn’t quite as ground breaking as it thought! – and cinematographer John Alcott, who won an Oscar for his work on the film, had to use super-fact lenses to capture their subtle glow.  The 18th century setting is re-created with many scenes looking paintings from Gainsborough or Hogarth.  Marisa Berenson is an immaculate Gainsborough lady, with her extravagant, over-large hats and panoramic wigs to go with them.  And when Barry has married her and become used to a life of luxury, he develops a taste for physical pleasure with as many women as possible at one time in a scene that could easily have been sketched by Hogarth.

That’s just two examples, but there’s more.  The precisely choreographed battle scenes during Barry’s military days are spread out before us, yet the camerawork isn’t all about size.  A closer looks shows that everything has been researched down the minutest detail.  It’s what you would expect from Kubrick.

The film is full of magnificent set pieces, large and small, yet they all manage to come together to make an extremely satisfying whole.  And it’s one of those films that almost compels you to have a favourite scene, if not two.  One of the most remarkable is the duel between Lyndon and his resentful stepson, the young Lord Bullingdon (Leon Vitali).  Duels run throughout the film, with Barry usually on the winning side, but this one is more prolonged, deliberately paced and makes extraordinary use of the stylised language that went with the convention.  It’s so cold and bloodless that it’s difficult to associate the words with what they’re describing.  Death.  The tension is both spellbinding and unbearable and it’s impossible to predict what either man was going to do.  And it’s the result of 41 days spend on editing.

There’s a similar detachment about the film as a whole, a coolness that extends to the characters, Barry himself in particular.  Ryan O’Neal probably wouldn’t have been anybody’s first choice to play the title role, with mainly comedies behind him, but his boyish, almost bland looks suit the strangely passive central character to a T.  He’s not really a hero, nor an anti-hero, but drifts through life, allowing things to happen to him and then doesn’t just survive events but also makes something out of them.  Marisa Berenson as his eventual wife looks fabulous in her costumes, but appears to be cool to the point of icy – until tragedy strikes.

‘Barry Lyndon’ is an epic, not just in terms of its scale and setting, but also in terms of its length.  It comes from the days when a three hour film wasn’t so unusual, and when they came complete with an intermission.  Not that you’ll want more than a few essential minutes, because you’ll be itching to find out what happens next.  Its central character may be passive, but his story is anything but.

The film’s re-release is a welcome opportunity for Kubrick fans to luxuriate in it all over again on the big screen.  And it easily stands repeated viewings.  For the generation coming to the film for the first time, it’s a must-see.  But it has to be in the cinema.  The small screen doesn’t do it justice and simply isn’t an option.

A Kind Of Loving – DVD Review