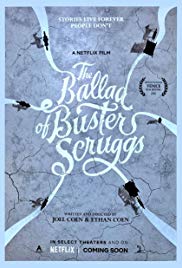 Another film from the Netflix bounty we have at this year’s Venice Film Festival is the Coen brother’s The Ballad of Buster Scruggs. Originally slated as a TV series on the streaming service, The Coens have now made the film into a feature length film.

After the hilarious Hail, Caesar! in 2016 the Coens are sticking to the classic Hollywood motif, but the film will still features the anthology structure that they had originally intended. The Coen brothers never cease to amaze an audience – they truly know how to make you laugh and cry all at the same time.

The Ballad of a Buster Scruggs will put a kick in your step for the rest of the day. The opening sequence is one of the finest in cinema today. You feel the Coen charm through the wit of Scruggs, but what enhances the scene is an unexpected song and dance number that I did not see coming!

Once we go through the first chapter they take you on a journey through the west. Scruggs tackles various issues of living in the Wild West. The amalgamation of these themes is connected purely by death. One would anticipate this is what the Cones were going for with Scruggs – the inevitably of death.

The chapter divide is a true breath of fresh air to the story. We are introduced to new situations and new characters. Some chapters work well, but some are weaker. This may also be one of the Coen’s most violent film for some time, but gun-slinging has never been funnier. One parlour scene in particular will leave you roaring with laughter but queasy at the same time. As has become the norm with the Coen’s work, it features a stellar cast; Buster Scruggs holds many Coen alumni and new comers. Performances from Zoe Kazan, Tim Blake Nelson, James Franco and Liam Neeson stand out from the crowd. The anthology provides powerful performances despite such short screen time. The Ballad of Buster Scruggs will be hitting Netflix and you shouldn’t miss it.