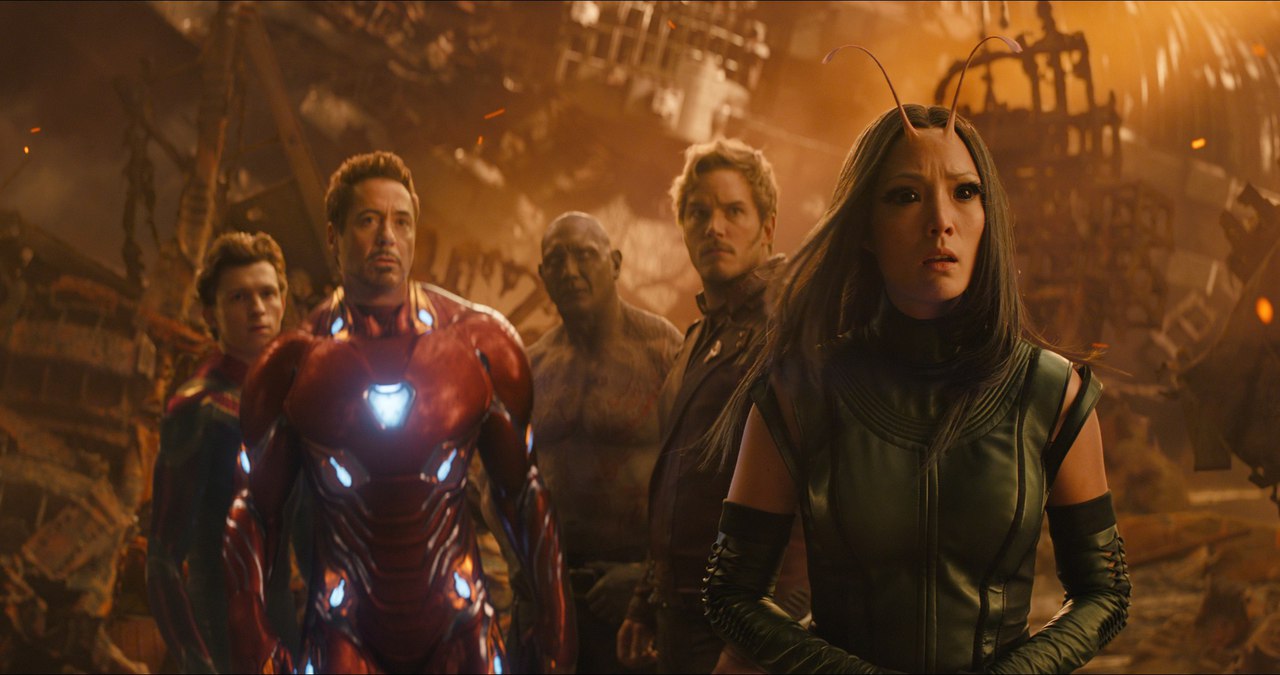 Directed By: Anthony and Joe Russo

After ten years, eighteen movies, eleven TV shows, and a half dozen shorts (or One-Shots), it’s unfathomable at this point that there could really be such a thing as a newcomer to the Marvel Cinematic Universe, and, frankly, that’s just as well – for, while Infinity War is easily the biggest boldest superhero smash-up to date, it’s frankly impenetrable if you can’t tell your Star-Lords from your Heimdalls. But, y’know what? Who cares.

What stands out most of all about the film, luckily, is the sublime balancing act by writers Christopher Markus and Stephen McFeely – legacy scribes within the MCU. It’s not flawless – Scarlett Johansson, Don Cheadle, and Anthony Mackie get noticeably short shrift, while a pair of regulars are sidelined off-screen with a single line of dialogue – but the manner in which Infinity War tackles the might of the numerous egos and personalities on display is outright spectacular. The weirdest character pairings you’ve ever seen really do come to life, and, for some – for instance, Paul Bettany and Elizabeth Olsen’s previously rather thinly sketched Vision and Scarlet Witch – there’s the opportunity to sparkle like never before. It’s bombastic, unapologetic, and it’s got the grit and gristle to put on the mother of all star-studded shows. It’s the superhero genre’s Woodstock, with Josh Brolin’s Thanos its Hendrix.

For spoiler reasons (#ThanosDemandsYourSilence – take goddamn note), the safest way to synopsise Infinity War’s plot is to simply detail its exploits as being the venture of intergalactic despot Thanos across the cosmos in search of the six Infinity Stones – the MacGuffins behind the entire MCU mythology to date – with the combination of all set to gift him sheer omnipotence and the ability to reshape the universe how he sees fit. Brolin’s a revelation in the part, still recognisable behind the CG facade and delivering a startlingly soulful performance that draws his mad titan in an impressively sympathetic manner. He’s no Killmonger, sure, but Thanos absolutely exceeds the previously rather phoned-in element of dread afforded him, his hulking physicality and admirably thought-out sense of philosophical devastation ranking him easily among the franchise’s best villains to date.

There are key notes on which Infinity War could so easily hang its hat and call it a day, yet it continues in an unrelenting manner not dissimilar to Thanos himself – running the gamut from sadism to desperation to such far flung extremes as a considered mediation on the frivolity of population control and natural resources. It’s bonkers through and through, but it works on the page and absolutely flies on the screen – with directors Joe and Anthony Russo throwing all their cards on the table and going for broke with nary a shake in their rock-solid confidence to be found.

It helps to have a cast as polished and well-honed as they do, and, after umpteen Thor, Cap, etc adventures, it’d be more shocking if they weren’t. There’s great chemistry on offer – Tony Stark and Doctor Strange make for an amusing pairing – even if the script drops the ball slightly as regards certain character dynamics (Stark’s explanation of what Cap’s been up to smacks of desperation to keep the characters apart). The buzzword, however, is “epic”, and it’s one Infinity War embraces every chance it gets. In her book, Superheroes! Capes and Crusaders in Comics and Films (which is a must read, as regards a pre-MCU landscape), Roz Kaveney frequently acknowledges a connection between both comic book lore and Greek mythology – a connection the Russos, Markus and McFeely clearly seek to indulge here. As haphazardly fun as Infinity War can be, it’s at its best when this is the case, with the MCU’s grand “third season finale” playing largely like an OTT mythological epic that just happens to belong to a universe that includes both Robert Redford and Jake Busey. Seriously. Agents of S.H.I.E.L.D. smuggled a Busey into the MCU. Look it up and enjoy that.

It’s not without its quibbles – it’s borderline exhausting, for instance, to sit through as much content as there is to be found here, and the decision to break the story into four or five smaller simultaneous sub-adventures does, periodically, short-change some in favour of others (*cough* Thor *cough*), but it’s excusable considering they’re both unavoidable in a structural sense and build to what could easily be the most jaw-droppingly unbelievable third act the MCU canon has ever delivered. Undercut faintly by a post-credits sequence that’ll raise both eyebrows and questions about the nature of its already-filmed sequel, Infinity War hits the ground running, offers some bonafide shocks as it goes, and concludes with a solid ten minutes that will have its audience staring at the screen in utter disbelief.

What’s great is that the Russo’s know just how to keep it engaging under the overly-ambitious weight being thrust upon it – action sequences remain as exciting and coherent as they were the first time they took the directorial reigns with Captain America: The Winter Soldier, and it’s a damn fine looking movie, courtesy of Winter Soldier and Civil War cinematographer Trent Opaloch. At times, Opaloch dangles the prospect of the Cannon Films-esque colour scheme gimmick of the Netflix Defenders team-up (by the way: no, they haven’t secretly included them – sorry) but instead crafts something suitably alien-feeling but familiar with what we’ve experienced of this universe to date.

Infinity War also sees the return of Avengers composer Alan Silvestri to the House of M, his gift for balancing individual themes amidst a wholly unique and captivating score as rock solid as it’s ever been, and standing in sharp contrast to Danny Elfman and Brian Tyler’s strangely forgettable efforts in Age of Ultron (be honest, you remember the closing credits theme and nothing else). Elsewhere, the frankly gargantuan level of CGI and digital effects feels light years above the oft-lamented counterpoint of the recent Black Panther (otherwise, still probably the MCU’s strongest entry to date) and there’s genuine thought put into just what piece fits where in the visual landscape, as with the narrative.

If there’s a sour note to be found in Infinity War, though, its in its most glaring and obvious weakness to begin with – those eighteen movies, eleven TV shows, and half dozen shorts have essentially become outright required reading in order to properly ingest just what’s going on. One single exchange of dialogue between Thor and the Guardians of the Galaxy, for example, references events in no less than seven movies in under sixty seconds – with nearly all punctuated by the MCU’s signature sense of bathos. It’s an issue you can’t escape at any point in the film, which romps along merrily, but would baffle any poor unfortunate hipster (“I’ve never seen a Marvel movie” has quickly become this century’s “I don’t even own a TV”, after all) with no pre-existing knowledge to begin with. That’s the rub, though – Infinity War is, after all, a season finale, and were that level of knowledge not the case, it’d likely draw umbrage for that too.

But you’ll love it, you’ll love every minute of it. There are things in here you thought you’d literally never see in a feature film, let alone a feature film with heft of The Return of the King, ten years of its own cinematic mythos, and the potential disaster before it that is sharing screen time between literally dozens of known commodities and fan favourites. Make no mistake, Infinity War ain’t f**king around, it establishes that from literally its opening second, before launching into the darkest, most bloodthirsty and unrelentingly grim comic book adventure (a word it never forgets is part of its remit) it could possibly be. It’s fortunate then that it has as much humour as it does to offset what could otherwise be one hell of an ordeal, resulting in a movie unlike any other you’ve ever seen.

Avengers: Infinity War delivers. And then some. It takes you to places you never thought you’d go, shows you sights you never imagined, and forces you to face up to the horrifying notion not only of what might happen should the forces of evil prevail, but also, what if those forces have a point? There’s a moment for nearly every contingent of its fanbase to bask in and enjoy, enough game-changing material to leave you truly breathless about just where in the hell we’re headed next (Ant-Man and the Wasp arrives in mere months), and Cap has a beard now, so the internet’s happy. Just as Kaveney’s book remains the sterling monument to a superhero landscape before the arrival of the Marvel Cinematic Universe, Infinity War marks a new point in the evolution of this once-maligned (and still is by an elitist sub-set of cinemagoers whose furniture presumably points at nothing) genre that has allowed the Apple to its rival’s Microsoft to offer up a Zune to its iPod and changed the game entirely.