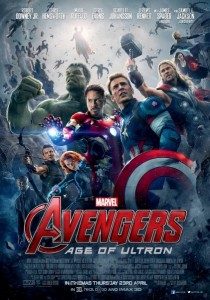 The instantly iconic panoramic shot of each superhuman character as Alan Silvestri’s glorious score powers the heroics. The sense of occasion and excitement that accompanied the release of ‘Avengers Assemble’ was palpable, as director Joss Whedon’s proven deftness for larger-than-life ensembles on the small screen, shined through on a blockbusting platform.

Previously operating with a consistently breezy sense of fun and displays of entertaining action as our beloved Marvel heroes’ origins are explored, ‘Age Of Ultron’ represents a crucial opportunity in Marvel’s Phase Two to charter into darker territory, with wars of a Civil and Infinity ‘nature’ set to rage under the watchful eyes of Joe and Anthony Russo (Captain America: The Winter Soldier).

Successfully navigating through a thorough examination of his own tortured mindset in ‘Iron Man 3’, Tony Stark (Robert Downey Jr) is determined to transfer his new found inner peace into an artificial intelligence program, initially teased by his own Iron Legion. The key lies in a scepter once in the hands of Thor’s (Chris Hemsworth) mischievous brother Loki, now within the decadent confines of a Hydra outpost. Vessels for such experimentation, the ‘he’s fast, she’s weird’ duo of Quicksilver and Scarlet Witch (Aaron Taylor-Johnson and Elizabeth Olsen) merely lay the foundations for the sinister adversary created.

A killer counter argument for Stark’s eagerness to evolve is represented by James Spader’s menacing Ultron. ‘I know you’re good people. I know you mean well. But you just didn’t think it through. There is only one path to peace.. Your extermination’. Threatening to tear apart the Avengers from within as the world questions their actions, the battles fought are as much about repairing the playful dynamics of the team as it is about restoring order once more.

As fans and particularly for the comic book genre, we’ve often watched a suitably spectacular trailer for a sequel, anticipating a richer, ominous premise complimented by compelling conflict. Only to declare a false dawn, as a narrative becomes bloated by unnecessary additions and tonal inconsistencies.

What Whedon achieves here is a minor miracle as he introduces a host of new additions. Bettany’s transformation from J.A.R.V.I.S to The Vision is both beautifully and hilariously realised as he hovers, gazing out towards the city, whilst James Spader’s Ultron is a formidable foe as he coolly transitions from unnerving wisecracks to Dalek-worthy ‘EXTERMINATE’ declarations.

The relentless wit intact albeit sporadically proving a deterrent undercutting the measure of the escalating threat, as the thrilling intricacies of its frenetically orchestrated action sequences provides a crowd-pleasing barrage of ‘money shots’ befitting of its budget. Yet it’s the grounded, fleshed out complexities of our heroes, that truly impresses in this outing.

A bewitching sequence intercutting between fellow Avengers as they relive past traumas and garner an unwelcome ‘preview’ of their worst fears realised. The old-school noble gestures of Evans’ Captain America clashing with Downey Jr’s mad scientist in Iron Man, as they seek to protect the innocent. The graceful, tender exchanges between Ruffalo’s Hulk and Johansson’s Black Widow as Jeremy Renner’s show-stealing Hawkeye springs surprises.

For all their lifesaving, we witness the first collective signs of their own flawed humanity, providing great emotional depth to underpin the drama.