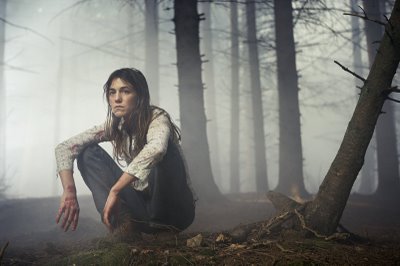 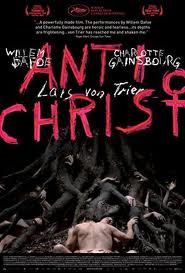 Those of a nervous disposition should look away now. No, seriously.

As a seasoned horror fanatic, I sat down to watch Antichrist with childlike enthusiasm and rubbed my hands with glee at the thought of an intelligent and surreal horror offering by Danish oddity, Lars Von Trier (ground breaking director of Dancer in

the Dark and Dogville). Two hours later I was a gibbering wreck. Antichrist is an unpleasant, depressing and uncomfortable experience. It will affect you on some level. It’s visceral, raw and unrelenting. It’s beautiful and ugly all at the same time. It’s infuriating and fascinating. It’s a bundle of oxymoron’s served with a generous side of hyper-real gore.

This movie is sometimes very difficult to watch. The gut wrenching opening scene is a triumph of cinematography and one of the most beautiful things I’ve ever seen committed to film. Set to Handel and shot in glorious black and white slow-mo, we see full on penetration and the death of an infant within 2 minutes of the start of the film. This is the Prologue which is then followed by chapters entitled Grief, Pain, Despair and The Three Beggars. Predictably, it’s all neatly tied together with the Epilogue.

Antichrist is the story of He (Willem Defoe) and She (Charlotte Gainsbourg) after their son dies in a terrible accident at their home. She is stricken with grief so He, a psychologist, offers to help her overcome it once and for all. He asks She to think of something she is most afraid of, hoping to make it a tangible metaphor for her pain and hopelessness. She suggests ‘Eden’, the woods surrounding the cabin the couple once spent the summer at. He takes She to ‘Eden’ and so begins the journey into Von Trier’s twisted yet glorious vision.

Defoe and Gainsbourg deliver mesmerising performances as the He and She of the story. Filming must have been genuinely draining as you can literally see every emotion in stark realism. Gainsbourg in particular, moved me to tears and sometimes sheer frustration at several points during the film.

Antichrist is brimming with symbolism and metaphors. On a very basic level, it’s about misogyny, gender and nature. It’s Adam and Eve in Eden. Women are the root of evil and so on and so forth. Dear reader, I do not wish to trivialise the thematic content of Antichrist but if you start analysing the ins and outs of the subject matter you will miss the point of this visually stimulating feast. You could literally study this movie until the cows come home but I won’t. Make up your own mind, read as much into the clues, symbols and metaphors scattered throughout the plot as you wish, but to enjoy the film it’s really not necessary.

In fact, I was sometimes left cold by some of the seemingly pretentious ‘psychobabble’ in scenes that seemed to drag on and on without moving the plot forward. Antichrist works best when it’s playing on your senses. The scenes of brief but ridiculously realistic mutilation (I now wince at the very sight of a pair of scissors…) and eerie, surrealist weirdness are most effective, as are the beautiful (but somewhat overused) slow motion shots of the woods around the cabin.

Antichrist is hypnotic. It builds and builds to an almost unbearable crescendo and you’ll sometimes wonder whether it’d just be best to turn it off, make some cocoa and pretend it never happened. I urge you, however, to steel yourself and get swept away by this visual masterpiece. Antichrist is what film is all about. It provokes a reaction, it’ll get you thinking, it’ll make you feel sick, it’ll make you angry, it may even annoy you. If it’s doing any of these things, it’s working.

A surreal masterpiece. Hats off to you Von Trier, you freaky Dutch genius.