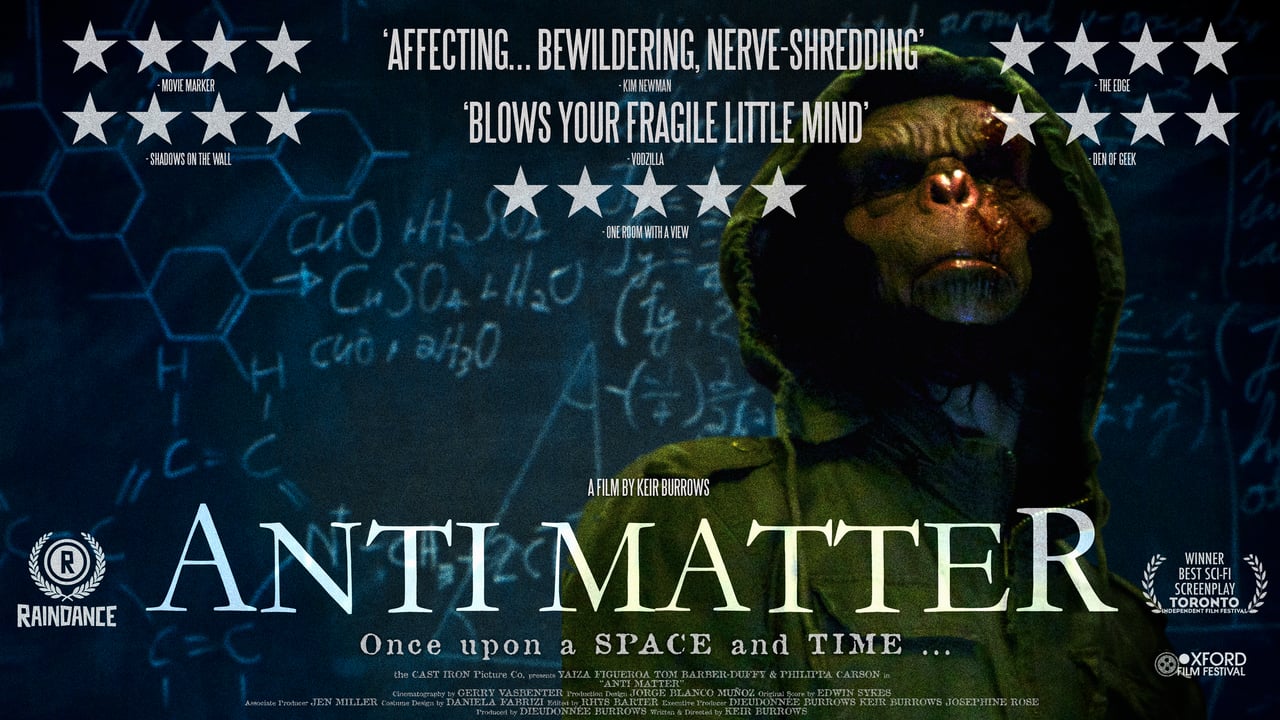 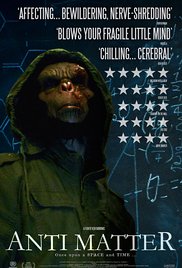 Science Fiction has always been a notoriously difficult genre to define, as almost every definition is subjective and usually inadequate. With burgeoning numbers of novels and movies classified under the genre a definitive description is more elusive than ever.

I shall venture to say however, if you are at all interested in the science-based sci-fi of ideas, (which is my particular favourite) you might make a point of catching Anti Matter at this year’s Sci-Fi London festival.

Anti Matter is a is a neo-noir, sci-fi feature, written and directed by Keir Burrows. His award-winning screenplay tells the story of Oxford PhD student Ana (Yaiza Figueroa) who, researching into physics which gets increasingly quantum, stumbles across what appears to be a method of creating a wormhole.

Ana enlists the help of her colleague and long-time admirer Nate (Tom Barber-Duffy) and shady hacker-scientist Liv (Philippa Carson) and the trio secretly develop a wormhole generator big enough to teleport a person.

As the authorities close in on their illicit research they must make some final tests before they are ready to spring their revolutionary invention upon a grateful world. They must pass a whole, living human through the wormhole. The group draw straws to find who will have the honour of this pioneering, dangerous task and Ana finds she is the one fated to pass through.

The next thing that appears to happen is that Ana wakes up in her bed after the experiment, ill and disoriented. It quickly becomes clear something has gone wrong: she cannot remember anything, and she seems to have completely lost track of time.

Her co-conspirators Nate and Liv appear strangely distant, then openly hostile. Ana suspects they may be plotting to keep the truth from her so that they can take credit for the project for themselves.

People recount events to Ana that she has no memory of. Then her flat is broken into by a masked intruder and her papers are stolen. She finds she is being watched by government officials. Ana is frustrated by her inability to fully remember her recent past but she begins to look for clues, determined to unravel what has happened to her.

Although she is unable to create new memories, Ana is relieved to find that she is still equipped with a superior intellect. She sets about finding her own way to the truth, piecing together the mystery (in an intriguingly Memento-esque manner).

The film comes to a startling and dramatic conclusion as, passing through many unexpected and gripping disclosures, Ana finally discovers the extraordinary secret behind the result of the transfer experiment and her memory loss.

Personally, I was mightily impressed with Anti Matter. It is entertaining and intellectually stimulating, with several sequences which are genuinely thrilling or eerie. In the lead role Yaiza Figueroa manages to convey Ana’s confidence in her abilities, but also her paranoia and heart-breaking isolation. (She is also feisty enough to clobber and give chase to intruders).

The film expects a level of intelligence and attention from the viewer, and rewardingly proves to be cleverer than many mainstream science-fiction offerings. (I’d bet that Chris Nolan would respect its well-crafted plotting). The movie manages to intertwine an absorbing story-arc with flashbacks and dream sequences, and offers us engaging characters with a decent script.

The film’s technical elements belie its micro-budget and show that, with a gripping story, a few properly developed characters, some scientific research and enough visual panache, one doesn’t need big bucks and CGI to make a science-fiction movie that’s worth seeing and which can present us with some morally ambiguous questions about the future of scientific discovery.

From the Director, Keir Burrows:

“Anti Matter is a fast, dramatic and accessible sci-fi thriller. Written for a micro-budget, it draws its momentum from tense dialogue and a noir-ish plot that should have the audience trying to solve the crime as Ana does. It uses locations carefully to help advance the story, with scope for creative production design as the wormhole generator is built out of scrap and circuitry.

In keeping with its film noir trappings, we use darkness to effect, creating suspense out of what isn’t seen. The film will be classically shot, carefully composed frames using shallow depth of field. Music plays an important role in the film; we use a mix of symphonic and electronic score to create a dark, tense mood that will help propel the narrative.”

Keir Burrows is an award-winning writer, director and producer. His film, The Showreel (2014) premiered at the BFI London Film Festival and won at Cambridge Film Festival. Both his previous films (Donkey, 2011, and Grace, 2012) opened at Tribeca. Together his films have won over a dozen Best Film, Screenplay or Director awards.

I for one, will be keeping an eye on where Keir Burrows is going to go next – hopefully, it will be somewhere we’ve never been before.