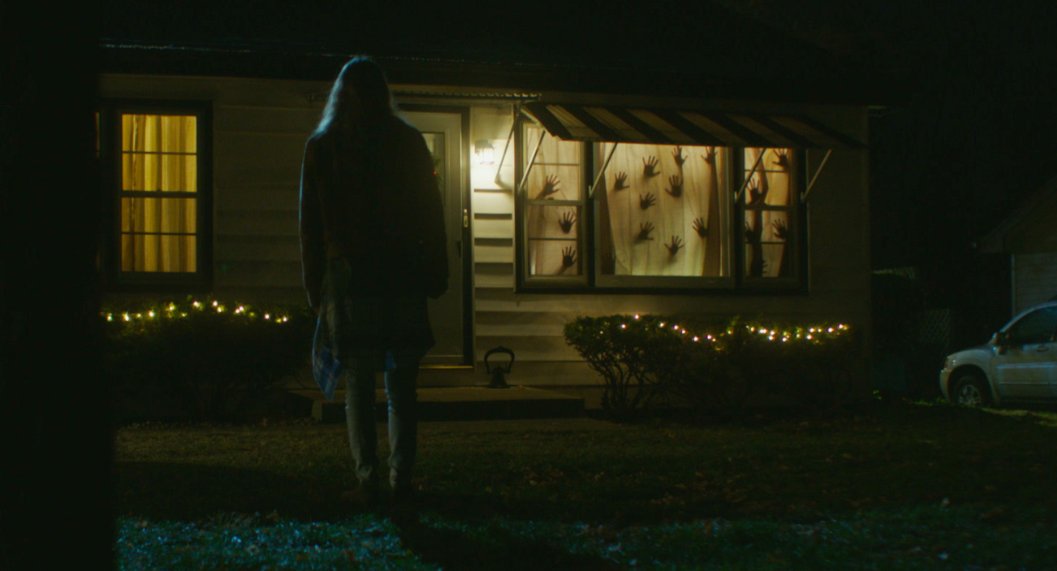 My first thoughts upon watching Anguish, written and directed by Sonny Mallhi in his debut, was that it reminded me of another recent horror film, It Follows, mostly in terms of the gorgeous cinematography which both films share, a similar aesthetic that immediately drew comparisons in my mind. That sense of brooding America, filled with sumptuous shots and clever camera angles, along with an unseen supernatural threat to a young woman, is something shared by both films. However the similarities end there. But it is nice to see this new thoughtful approach to the genre is spreading, we are getting horror films that no longer look cheap, they look more in line with bigger pictures, a new sweeping grace that slides off the screen into your eyes and mind.

Anguish begins with a bit of a fake out, the death of a teenager, hit by a car while arguing with her mother at the side of the road. This obvious opening sets in motion what will happen later but seems somewhat out of place with the rest of the film, you could almost lose it and it have no real effect beyond losing some exposition and opening with a bang.

What we get next is a fairly familiar set up; a girl, Tess, moving to a new town with her struggling mother, her father serving overseas in the military, not quite the broken one parent home we often get from this sort of film but certainly a family stretched close to breaking point. There is something off about Tess, we see this immediately, her thoughtful expressions and long stares, coupled with the abundance of medication she appears to be taking. Tess has some form of mental illness, although the film deliberately never specifies what it might be, and it has clearly brought a great deal of strain down on her and her family.

It isn’t long before Tess starts hearing banging on the walls and bumps in the night. The first half of Anguish is very effective, the scares come thick and fast, tension builds, even though we can all work out who is haunting Tess and why, you might find yourself jumping once or twice during the first thirty minutes. The scares work because of the quiet and thoughtful nature of the film itself, the effective and minimal use of music, as well as Tess herself as a character. Her mental illness is the important factor here and makes the viewer question what they are seeing. Is it all in Tess’s head or is she being haunted by the ghost of the girl who died by the roadside in the opening few minutes?

It’s not a spoiler to say that she is. The setup is clear and there’s no real twist to it. Unfortunately once the possession of Tess begins, the wheels start to come off slightly, too many explanations are given. The best horror films don’t feel the need to explain too much and Anguish soon decides it wants us to know everything, and that robs it of any real tension towards the end. A few plot points, one involving a local priest, seem to go nowhere and may well be the victim of some well-placed editing that could have gone further and been removed altogether.

The acting from an almost entirely female cast is great, these feel like real teenagers and real parents, with emotions running high at all times. The take on mental illness and its relation to the supernatural works for the most part, and I feel the film was trying to say something on the subject of mental health and disorders, and that it might have been something worth saying, but that message gets lost in the muddle of a clumsy third act.

Anguish is stylishly shot, interesting and at times a genuinely scary film. The last thirty minutes do let it down and it suffers as a whole because of this but it is definitely worth a watch if you want something a little different.