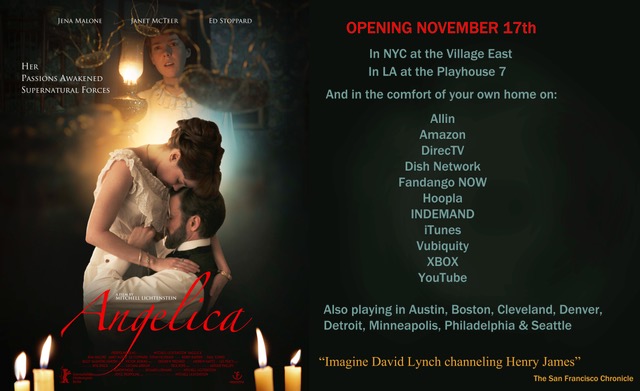 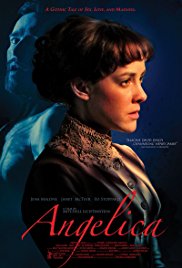 It’s been ten years since Mitchell Lichtenstein’s Teeth was released and became a cult favourite. Following up any successful feature for a director is a daunting task and, after his second feature film, Happy Tears failed to reach those heights, Litchenstein has returned with the well-crafted and thoroughly enjoyable, Angelica.

We follow the story of Constance (Malone) and her husband Joseph (Stoppard) who after the difficult birth of their daughter Angelica, are unable to conceive another child for fear of a more severe ending. With options limited, abstinence is the only form of contraception. As frustrations and desire grow, a series of supernatural visits begin to threaten Constance and Angelica.

Jena Malone’s performance as Constance is the stand-out. Emotive and  Mix that with some beautiful costuming and a handsomely crafted Victorian London, the film is a pleasure visually.

While fans of Teeth might be disappointed by the somewhat milder nature of Angelica, it’s horror plays with the viewers perceptions of the goings-on rather than relying on jump-scares. There are some spine-tingling moments, some vivisection and a few graphic descriptions can leave the audience squirming in their seats.

It’s not without it’s flaws, some of the CGI looks a little out of place at times and the tonal shifts feel forced. This reviewer can’t claim to have read Arthur Phillips’ source material so it’s hard to know where the narrative differs and if the issues come through the transition to the big screen or if Litchtenstein, who also wrote the screenplay, has had to adapt the plot somewhat in his attempts to create tension.

in this era of high-budget horrors like IT, Annabelle and The Conjuring, Lichtenstein has delivered a thoroughly credible feature, made all the more enjoyable through a fantastic leading lady in Malone.

Angelica is in select US cinemas and available on-demand now

Related Topics:AngelicaJena Malone
Up Next