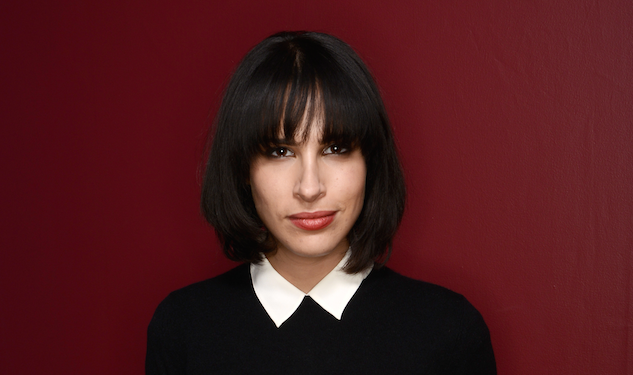 Desiree Akhavan is creating waves in the film world with her debut feature film Appropriate Behaviour, a playful dark comedy about life as an New Yorker, Iranian and bisexual. So how did this ‘outsider’ narrative get so much exposure? As well as writing and directing the film, Desiree also plays protagonist Shirin in the film, and will also star in HBO’s new season of insanely popular Girls. I grabbed some time with her during the preview of the film at last year’s BFI London Film Festival, where she talked to me about how she started out and why she is definitely here to stay.

You started out acting. How did the desire to write and direct come out of that?

I did start my career acting, but I would get constantly told that I don’t fit the mould. I see actors that are blank canvasses that can be moulded into their parts, and I’m so not like that! I guess I realised that I’ve always been a storyteller and I needed, and love, to tell stories.

What kind of stories?

I had this dark humour when I was younger and I don’t think that I’ve shaken that off. I used to write plays when I was around nine years old. They mainly consisted of these surreal dramas and black comedies! I realised comedy was where I was happiest so decided to pursue that. Appropriate Behaviour is definitely something that I’ve been planning to do since I was very young.

How did you make the jump from web series to feature film?

After graduating film school in New York I started to study the film festival ‘format’ and then went away to try and make films that would fit this mould. I just wanted to make these short films that would do well in festivals. After some time, I realised that it really wasn’t working and I was missing something. Once I started making the films that I actually wanted to, about topics that meant a lot to me, the films organically started reaching the right people and everything was so much smoother. That’s when I made my web series which got a lot of attention online and opened my eyes to that platform. I met my perfect producer in Cecilia (Frugiuele) and talked to her about the feature idea. She really got everything going and I knew that it was the right time.

Was it smooth behind the scenes making this movie?

Making this film was smooth as butter compared to the others I made, where I was constantly trying to fit a square peg in the round hole! It had it’s difficulties, obviously directing myself in the film I had to take a step back and look at my performance critically. But in the end I am super happy with the result.

How did you get your part in the upcoming season of HBO’s ‘Girls’?

Honestly, it was the easiest role to get! I met Lena (Dunham- creator of ‘Girls’) after she’d seen my film. She asked me to come in and that was that! It’s such an unbelievable honour that she liked the film and I was so excited. People keep asking me whether I’m part of this ‘new wave’ of feminism happening right now, spurred on by the amazing work that Lena and others are doing. I think that women are strong and their voices are important, and if that makes my film feminist, that’s great!

What advice do you have for people starting out in the industry today?

My advice would be to be authentic and true to your voice. The minute I started writing what came naturally, everything fell into place. My web series got a lot of attention, and I became able to get my feature ideas listened to, so you need to find the right platform to get your work out there.

Appropriate Behaviour is out on March 6th in selected cinemas, and is screening during the BFI Flare Festival in London throughout March.

An Interview With… Rhys Chapman, Director of ‘Wonderkid’

An Interview With…Andy Goddard (Set Fire To The Stars)