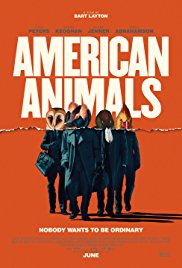 What’s stopping you from committing a crime, if the crime is both easy to pull off without getting caught, and extremely lucrative? Bart Layton’s debut feature, American Animals, plunges into the morality of criminal activity, carefully and cleverly adhering to and improving on a standard heist film structure. A true story of 4 male college students who decide to steal the most valuable book in the country, American Animals is simultaneously a nod to a number of classic genre examples, and something surprisingly original.

Spencer Reinhard and Warren Lipka are friends from high school, now at college and bored. Where and when the idea forms to steal John James Audobon’s Birds of America from Transylvania University library special collections room is never totally clear, but the two friends dive headfirst into the plan, recruiting two more acquaintances as and when they realise they are needed. Perhaps there is no reason other than a sense of dissatisfaction with their lives, one of many similarities to Fight Club. And if Fincher’s psychological thriller is indeed a reference point for this film, Layton positions Lipka as the rousing, untrustworthy leader following in the footsteps of Tyler Durden. It is as if Evan Peters has been waiting for this role, biding his time in consistently impressive, scene stealing supporting roles on TV and in the X-Men series. As Spencer, Barry Keoghan is predictably reliable, though his performance is not too far removed from last year’s Killing of a Sacred Deer. Blake Jenner is a revelation as getaway driver Chas, after bland appearances in a number of high school or college movies.

The script oscillates between tight and exact, comical or expositional dialogue, and what could almost be mumblecore-esque improvisation. Conversations exemplifying the latter seem to be Layton’s attempt to ground the friends’ relationships in a reality that the rest of the film doesn’t adhere to. The scenes feel out of place, and flat. Luckily, the rest of the film is sharp, well paced and hilariously on point. It is not uncommon, even in films centring on true stories, that the characters feel fake or fail to be fully rounded. Here, however, it is the witty dissection of the idiocy of 4 young men, in addition to some intelligent structural choices, that both cements the believability and enjoyment of the story, and allows it to take flight as a feature.

The gang’s stupidity and the irony of their actions go wonderfully hand in hand. The boredom that, in part, sets off the heist conflicts with the boys’ desperate desire to remain at the age they are – they dress up as old men to perform the heist, claiming that the elderly are “invisible”.  They use classic movies to help them plan the heist, but draw from unsuccessful capers – Reservoir Dogs and The Killing are two of their main influences. Layton’s meta use of these films both as plot devices and stylistic references in his direction is impressive, and the editing is extremely well handled. Perhaps there is one too many a montage, the odd cliché here and there, and a host of references that are a little too overt. But these details are easy to forgive considering the nature of a heist or crime movie. American Animals is a breath of fresh air in a genre sadly rife with disappointment.

Comparisons to I, Tonya are inevitable, but obvious. Structurally, the film hits a lot of the notes, though Layton has more fun mocking the reliability of his sources. And his approach to the grey area subject matter is far more nuanced than Gillespie’s Oscar vehicle. The genius is not in the original way a true story is told, but the moral quandary at the film’s centre. Layton doesn’t ask whether the crime is right or wrong – inevitably a majority would denounce the group’s actions, whilst some would not see who is hurt by the theft of a priceless book. The intrigue is in the rationalisation of something darker, the decision of what to do about the only real obstacle in their way, the librarian. Pivoting the film around this issue, this deep seated guilt, is Layton’s masterstroke in a debut packed with entertaining intricacies and an abundance of talent.