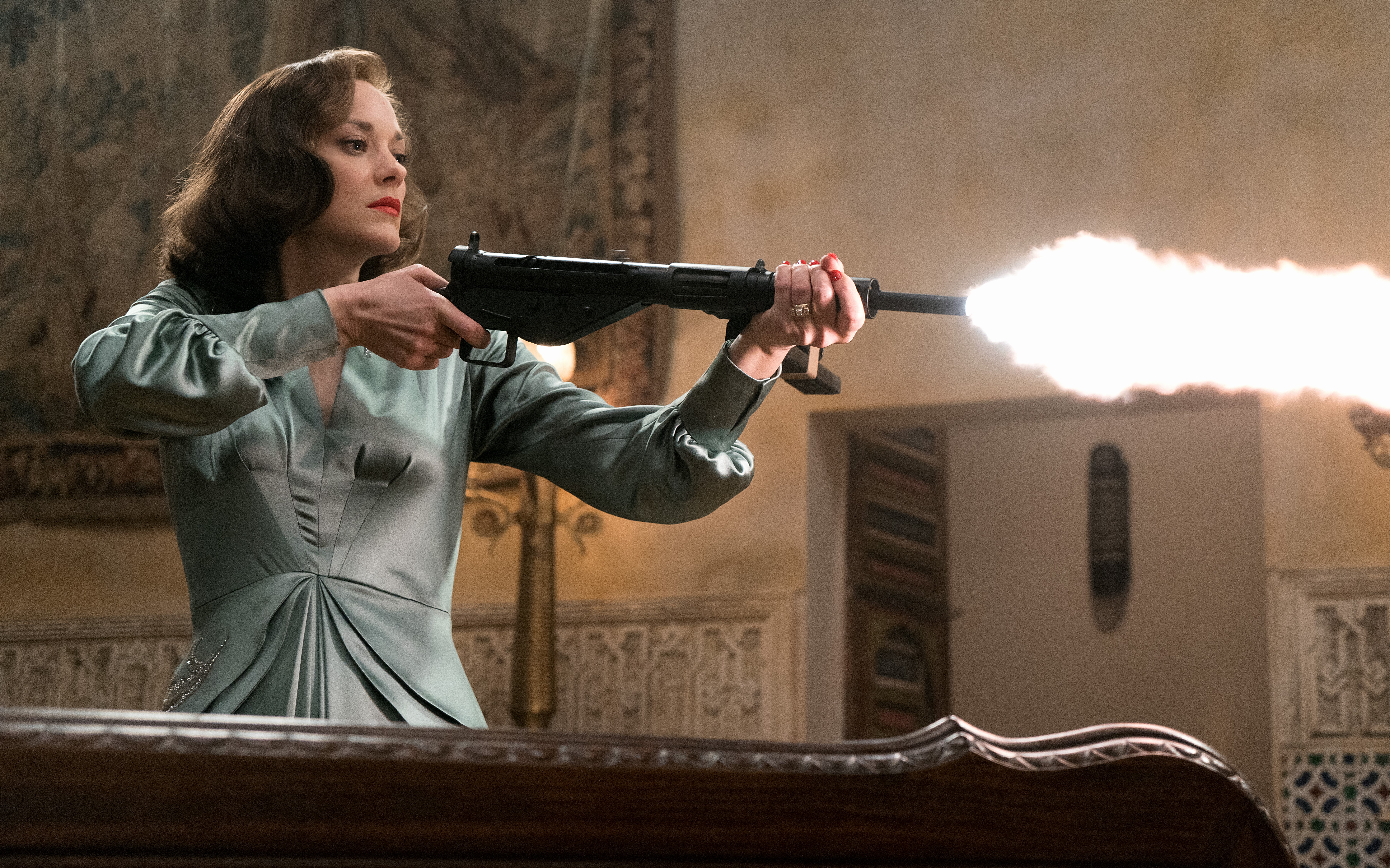 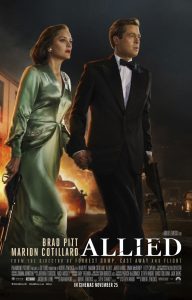 If you were paying attention during English at school, you’ll know what pathetic fallacy is.  And if ‘Allied’ is anything to go by, its director Robert Zemeckis wasn’t so much listening as drinking in every detail and possible permutation.

He just can’t resist using it over and over again.  Brad Pitt and Marion Cotillard share a passionate love scene in a car out in the desert: while passion rages inside, a sand storm rages outside.  Cotillard gives birth to a baby, right in the middle of an air raid: the planes are screaming overhead while she screams down below.  And when a tragic execution takes place, it’s all done in the pouring rain.  See what I mean?

It doesn’t help with the credibility or the plot of this rather ho-hum World War II espionage story.  It starts off in Casablanca, where Canadian Air Force officer Max Vatan (Pitt) arrives to take part in an assassination attempt.  His contact is resistance agent Marianne (Cotillard) and the two masquerade as man and wife.  The mission over, he takes her back to London where they marry.  But then the British military become suspicious that she’s a German agent and set a trap – and her loving husband is part of it.

You’ll have spotted the Casablanca reference, but thankfully the film doesn’t try to emulate the Bogart/Bergman classic.  It wouldn’t have stood a chance.  But Zemeckis finds a nod in its direction utterly irresistible, so there’s a reference to Marianne playing the Marseillaise on the piano in a restaurant full of Germans.  Now where have we seen that before?  If it does fancy itself in the mould of another film, it’s ‘The English Patient’, especially in the early scenes in the desert, which look like a straight imitation.  The wartime setting, although it’s the Second World War rather than the First, serves to re-inforce the impression.

While Cotillard brings some surface glamour, the storyline is unremarkable and disappointingly flat.  That isn’t the only problem.  There’s precious little chemistry between her and Pitt on the screen.  As she points out, they’re two people who’ve been trained to tell lies, which makes it even harder to believe in their falling in love.  It’s just as difficult to believe in Pitt as a Canadian, because he doesn’t get the accent right, making you wonder if it’s him who’s spying for the Germans, instead of her.

So the two are left to flounder.  Their characters are so woefully underwritten that even actors of their calibre – Cotillard is one of the world’s best – don’t stand much of a chance.  Yet it’s essential we buy into them for the film to work on any level.  Despite the shortcomings of the script, they dominate the film, with the rest of the cast in small, sketchy roles that squander the likes of familiar British faces like Anton Lesser, Marion Bailey and Jared Harris.

Zemeckis made his name as a special effects whizz-kid and this has carried over into his more recent films, ‘The Walk’ and ‘Flight’.  But here he’s taken on something that’s intended to be purely character driven and it’s as if he’s become so embroiled with the technical side of film making that he’s forgotten how to work with real live actors.  The result is by-the-numbers, a film which is rather like the aircraft that explodes on Hampstead Heath.  It crashes and burns.

In The Heat Of The Night