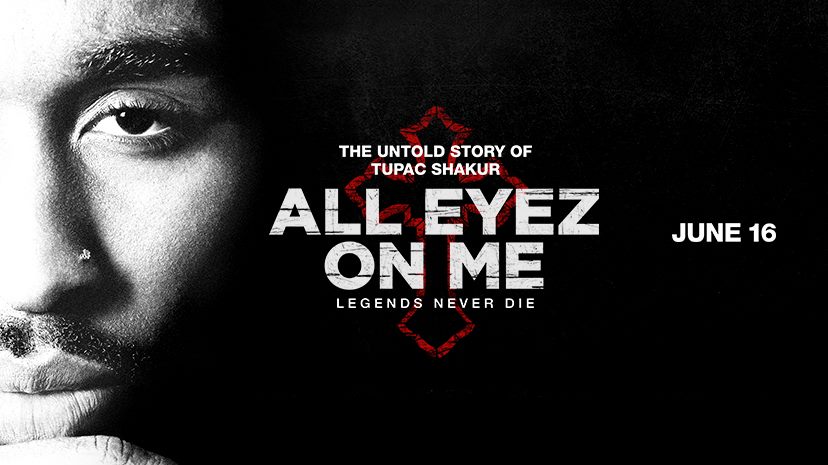 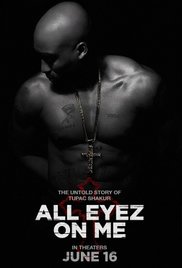 All Eyez On Me, named for the final album released in Tupac Shakur’s lifetime, tells the tale of the rise of one of music’s most infamous artists. Starting with his pregnant mother Afeni’s (Danai Gurira) exoneration as part of the Panther 21 and ending with his as yet still unsolved murder at a Las Vegas intersection in September 1996 the film covers a lot of ground in its 129 minutes.

The first half is laid out in an interview meets flashback format as Tupac (Demetrius Shipp Jr.) serves his prison sentence for sexual assault. Answering questions on his life and influences Tupac speeds through his unstable childhood and his mother’s descent from powerful activist to drug addict in denial and with this as a background we are led to understand Tupac’s desire to perform and to be a star.

With his career rapidly progressing from backing singer for the Digital Underground to solo artist and film star, Tupac’s status skyrockets and with it comes the appearance of other well-known artists of the era such as Biggie Smalls (Jamal Wollard reprising his role from 2009’s Notorious) and Suge Knight (Dominic L. Santana). Naturally, his rise to fame is followed with a rapid fall and after several run-ins with the police, Tupac is finally put on trial for a sexual assault that took place in his hotel room. As the trial unfolds, the first attempt on Tupac’s life is made and with it comes the beginning of the end for his relationship with Biggie as the troubled star thinks his friend may be responsible for the attack.

In a meeting of the two timelines we have followed to this point, Tupac signs with Death Row Records and aligns himself with its CEO Suge Knight despite rumours of violence and gang warfare within the company and as a result, intensifies the East Coast/West Coast hip hop rivalry that was unfolding in the industry at the time.

As the story speeds towards its inevitable end we are encouraged more and more to see Tupac as a man trapped by circumstance. The good guy who has always tried to do the right thing even if it has led him to the wrong place and as he makes the decision to walk away from his girlfriend, Kidada Jones (Annie Ilonzeh), and a quiet night in to attend a club with the Death Row members for a few hours you can’t help but rage at the screen.

I’ll hold my hands up and admit I knew very little about Tupac before this beyond the Elton John collaboration and the ill-advised hologram resurrection so I’m very much not the target audience for All Eyez On Me so I have to wonder how true fans feel about his depiction here.

For the most part I was in awe of what appeared to be a modern day Shakespeare cut down in his prime. I was surprised at his thirst for knowledge, his intelligence and his drive to do good for his community. I was amazed to learn of his long term friendship with Jada Pinkett (now Jada Pinkett-Smith played by Kat Graham of The Vampire Diaries fame) and to watch as he drifted from her positive creative influence to the rage and vengeance of Suge’s world apparently against his will. Then something jarred. That tiny bit of Tupac knowledge I did have didn’t quite sit right with the man I was being shown on screen. The closer to the end we got the bigger that little doubt became and as soon as I had the opportunity I felt compelled to pull up a biography and was hugely disappointed by what I saw.

It’s no secret that Tupac wasn’t a saint, his troubles with the law even have their own section on Wikipedia, but for some reason All Eyez On Me feels the need to gloss over this with a thick layer of gold plated, diamond studded optimism. I appreciate wanting to make your leading man a hero in the eyes of the audience, but there’s rose tinted glasses and then there’s not being able to see the thorns for the rose bush. I felt cheated that I hadn’t been allowed to bond with Tupac for who he really was rather than a fake smoke and mirrors version. The lack of trust in an audience to weigh the good against the bad and still appreciate the talent is foolish, especially with such a public figure who already has a sizeable fan base and who won’t be turned against him if presented with the truth.

Two things do, however, manage to save the film from itself. The talent of Tupac cannot be denied and his music dominates All Eyez On Me from beginning to end. Somewhat overpowering in places to the detriment of dialogue, the soundtrack is everything and its importance not just to the film, but to culture and music as a whole is placed front and centre at all times. Tupac was the beginning of a movement that is still pushing forward today and we are never allowed to forget that, even in the darkest moments of the story.

Secondly, and probably the most important aspect of the whole feature, Demetrius Shipp Jr. is mesmerising. He could be Tupac’s twin and his performance just glues you to the screen from the minute he first appears to the final fade out and you cannot help but cheer for his version of Tupac. Without such a believable performance, All Eyez On Me would fall on its own PR spin as even now I find myself questioning if the film may be the reality rather than the multiple online biographies I’ve trawled through for the truth and that is purely because of Demetrius Shipp Jr. giving everything he has at every single moment.

As a whole All Eyez On Me is fantastic. It’s gripping, compelling and filled with drama that doesn’t often come in a biopic but somewhere along the road, this biopic lost its way. It stopped being a story of a lost legend and just became legend. If you’re looking for a fascinating tale of stardom, feuds and overcoming the odds through powerful music then this is for you, if you’re looking for the true story of Tupac maybe buy a book instead…