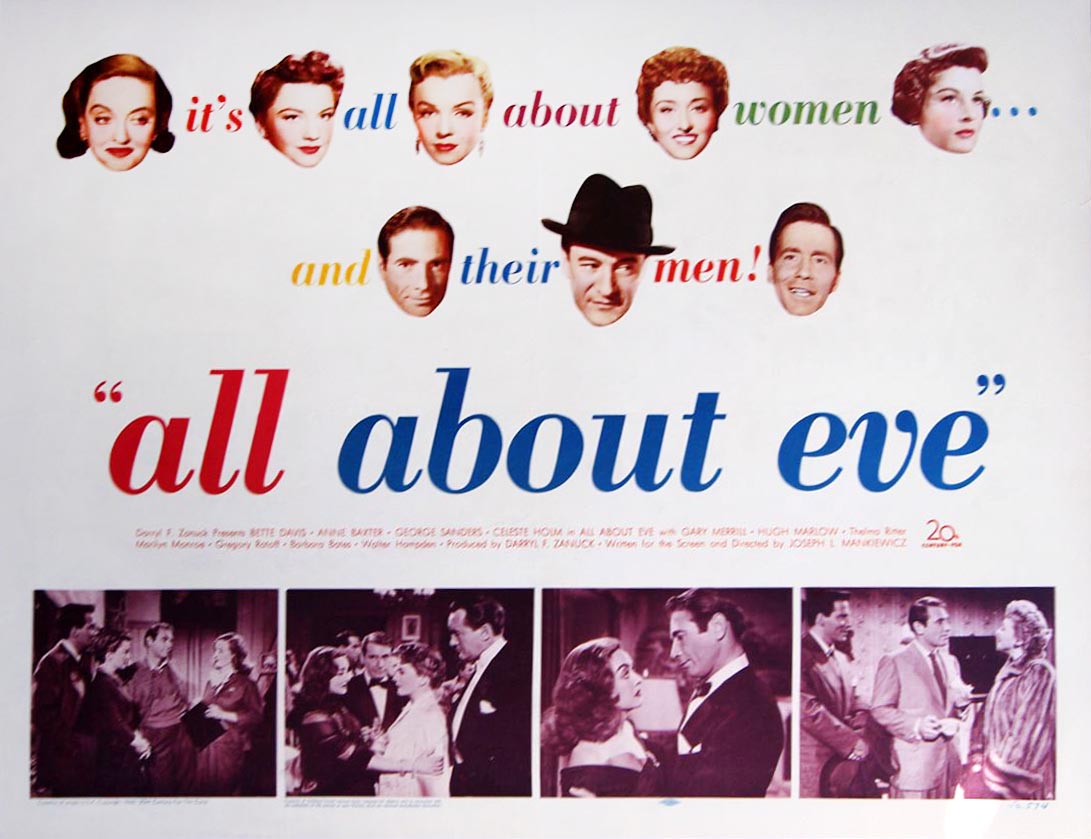 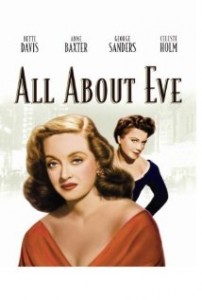 Starring the incomparable Bette Davis, All About Eve is an interesting and thoughtful critique of female stardom, and a cautionary tale about the pitfalls of obsession. I was in love from start to finish. Full of dense, complex characters, Joseph L Mankiewicz has created an ode to femininity and female prowess.

The brilliance of All About Eve lies in its subtlety. Watching the story unfold almost exclusively from Margo Channing’s (Bette Davis) perspective, Eve Harrington’s (Anne Baxter) intentions are left shrouded in mystery. Tension rises and tempers flare as Margo’s suspicions are gradually confirmed. It is through little more than a suggestion from a housemaid or the implications of a glance that Margo’s paranoia and insecurity mounts. The subtle nuances of human interaction fuel the ambiguity behind intention, clouding Margo’s judgment and impeding her reputation amongst those closest to her.

Subtly and sweetly, Eve pushes Margo to the brink, all the while inching her way into her shoes. As a result of Eve’s shrewd, and tactful technique, Margo manages to make herself look insane. In an industry where youth is prized, Eve’s presence serves as a constant reminder that Margo is in her forties. Though she may be one of the greats, newer, younger, and fresher talent is coming onto the scene.

It isn’t until the final act that we can confirm and fully understand Eve’s vindictiveness. The film’s conclusion serves as poetic emphasis of the cyclical nature of the industry. It’s a vicious industry in which you either have to know the right people or be willing to do the right things to get to the top. The right things seldom involve taking the moral high road. It’s a testament to the changing face of entertainment, where you have to be willing to claw your way to the top. Step on the hands of those who fed you, and use them as a heap to climb to the summit.

Going into All About Eve, I knew next to nothing. As a result, I had very few expectations. I found myself pleasantly surprised that romance took a back seat, and women ran the show. Though still a socially dated film, it was miles ahead of its time and survives as a landmark today for that very reason.

Bette Davis was a gem as Margo Channing. A woman with real chutzpah, she portrays my favorite type of heroine. Providing some of cinema’s most memorable lines (“fasten your seatbelts, it’s going to be a bumpy night!”), she offers up a female lead in the early 1950’s who oozes gumption. She is, in my mind, the ideal leading lady: intelligent, resourceful, and full of sass and wit!

Anne Baxter’s demure innocence gives her the perfect façade to masquerade behind. Her performance as the seductive ingénue gives us the perfect juxtaposition to Margo’s bitterness and increasing feelings of obsolescence. She is the embodiment of Margo’s youth and determination. Only now, in the moment of her decline, this presence of youth and vigor becomes threatening. Baxter’s transition is seamless, as she subtly transforms from doe-eyed lamb to sharp-toothed wolf.

Celeste Holm rounds out the female powerhouses with her role as mediator Karen Richards. Though predominantly playing a rather prototypical female role, her position shifts throughout the film. Transitioning from mother hen, nurturing Eve and encouraging Margo to show her the ropes, to a dear friend sincerely at odds with fact and fiction, she offers a complex portrait of femininity of the day. She finds herself somewhere between Margo and Eve, not quite the housewife archetype, but not entirely beyond its trappings either.

The film is exquisitely written, and remarkably acted. The outstanding cast elevates the already remarkable script, amplifying the impact of its elegantly crafted dialogue, ultimately canonizing it as one of the greatest films of all time.