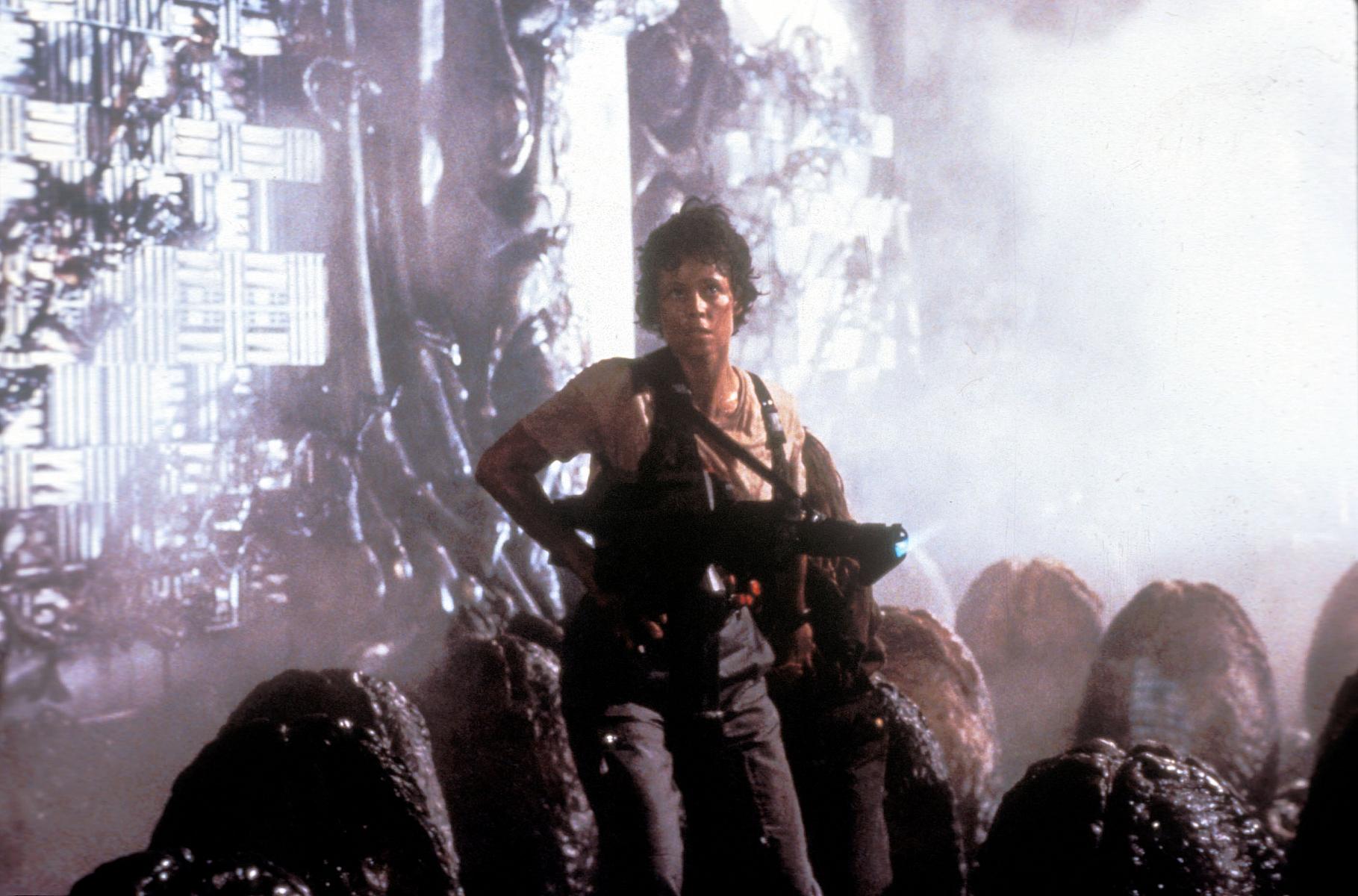 Alien is one of the most discussed, dissected and academically analysed movies in modern cinema. Considering so much has been said about it, the film seems to be simplicity itself: a tense, linear storyline, an innovatively envisioned setting, sparse dialogue – it is simple, but close to perfect. Belying its high production values and box-office success, Alien was made on a shoestring by Hollywood standards (approximately US$11 million). It just goes to show that a little creativity and imagination goes much further than mere dollars. Without the benefit of CGI, Ridley Scott and the Swiss surrealist artist H.R Giger relied on their artistic inventiveness to create this iconic and hugely influential science-fiction movie. We would never see space travel the same way again. 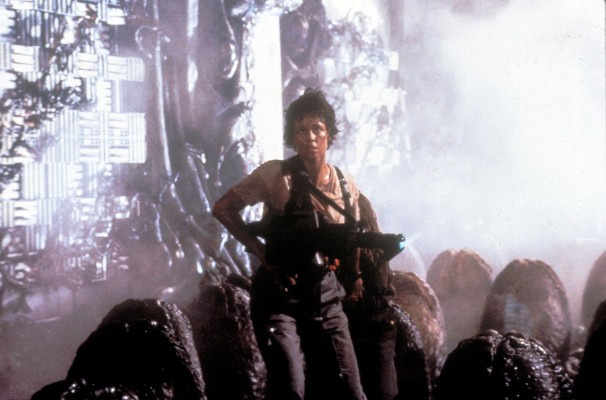 Although by Ridley Scott’s return to his Alien universe with Prometheus turned out to be rather anti-climactic, it may be timely to remind ourselves what caused us to feel the anticipation in the first place.

It is hard for the current generation to imagine a time in science-fiction before Alien, a time before face-huggers, chest-bursters and strong heroines, but such a time there was.

In the science-fiction movies of the fifties, sixties and early seventies, the role of female characters, with rare exceptions, was confined to mixing cocktails for their scientist husbands and screaming and fainting at inconvenient moments. They were there to be ‘protected’ and ‘rescued’ by the male protagonists, often as adjuncts in a larger scheme of saving the world. Apart from the occasional appearance as tightly-costumed, science-babe-eye-candy, their role was generally as helpmeets, or consisted of dithering hysterically and getting in the way of the serious business of the menfolk.

After three (four if you count the ‘Predator/Alien’ excursion) subsequent Alien movies, countless imitators, and the wholesale plundering of Giger and Scott’s sci-fi visual language, it is hard for latter generations to comprehend sci-fi movies that came before, since the entire ‘look’ and tone of sci-fi was forever altered. As a female raised by a father with a fondness for sci-fi B-movies of times past, I found Alien a revelation. It was a shock to see a female character, thanks to her mixture of ingenuity, practicality and luck – allowed to finish a movie as the sole survivor. I’d never seen that happen before – just as I’d never seen a face-hugger, a chest-burster or that outstanding Giger visualization, the Xenomorphic alien (for which he won an Oscar).

It’s impossible now to approach Alien as a first-time viewer and feel anything resembling its original impact. Everyone knows too much about each of the iconic scenes of the movie, whether they’ve seen it or not, whether they like sci-fi or not. It made an international star of Sigourney Weaver and of the Xenomorph she managed (against all cultural odds) to escape. We have become so familiar with the ‘Alien’ of the title, most viewers don’t realise when watching the original movie, that the creature is never really seen properly until the last few shots. (We didn’t actually get to see that fabulous creation in its full glory until the James Cameron action sequel, Aliens.)

Martin Scorsese, in his recent film Hugo, reminds us through his fictionalized character of Georges Méliès, that film is a potent medium because of its link to dreams and unconscious states. In that sense, science-fiction film can be seen as a genre predicated on the exploration of the bizarre, fantastic, and unusual – most closely connected to the imaginary, to dreams and possibilities. Despite its apparent simplicity, Alien tapped into some deep psychological territory, and this is another reason why its resonance is still felt throughout popular culture today. 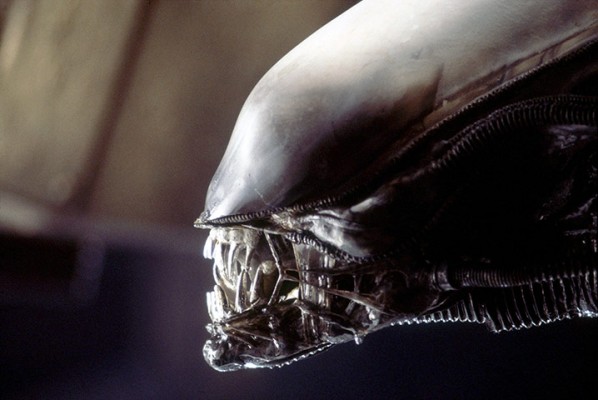 Prometheus dealt with the problem of origins, but we must look back to Alien to see where these questions were first formulated. That movie began with the camera exploring the inner-space of the mother-ship, tracking down a corridor to a womb-like chamber which houses the crew, wakened from a protracted sleep by the craft’s support-system, aptly named ‘Mother’.  Their waking mimics a kind of rebirth, but they emerge into a clean, antiseptic, white-walled ambience – well-controlled and regulated with no hint of blood, trauma or pain. Contrast this with the crashed, unknown ship three of the crew are later required to enter (through those vulvic openings). That interior is mysterious, dark, dank and organic. They are lost within its hugeness, and tiny in comparison to the giant figure of the life-form they find inside, fossilized in its death-throws.

Crew member Kane is lowered into a steamy chamber housing rows of eggs, the most basic of organic forms. As his hand touches one of them it opens up, revealing a fleshy, pulsating interior. The thing inside leaps out, smashes through his helmet and penetrates through Kane’s mouth – reaching deep inside him in order to fertilize itself within the secure confines of his stomach. Many primal fears are invoked here – the fear of suffocation, of forced penetration and of unwanted pregnancy, and just for good measure, this invasive violence and subsequent gestation is perpetrated upon a man. The Alien is not fussy about whom it impregnates.

The now, well-known scene of Kane’s bloody birthing of the Alien ‘baby’ was originally one of the most jolting cinematic ambushes in cinema history. It begins innocently enough, with Kane apparently recovered and the Nostromo ‘family’ happily reunited over dinner – but it ends with Kane convulsing in agony, being held down by his unwitting crewmates, when, with a cracking of rib-bones and a spray of blood and entrails the Alien infant gnaws and bursts its way out of his torso, hisses at the stupefied, gore-splattered crew, and scurries out of sight. On its first release, the cinema-goers were just as shocked as the crew – in space, apparently, ‘no-one can hear you scream’. Here, we discover the invasive ‘alien’ violating the human body, bursting through its flimsy organic matter and the barriers of sexual identity – and that birth is death – talk about invoking subconscious Freudian fears!

But probably the bravest twist in the original Alien movie was to kill off the central character of the rugged and manly captain (Tom Skerritt) mid-narrative, and against all contemporary expectations, to allow the prettiest woman on board to be the shrewd and tenacious survivor – to allow Ellen Ripley to take the role of monster vanquisher. In that first movie she emerged gradually from an ensemble cast to be the focus of identification, but following on from that, Sigourney Weaver’s character of Ripley was to become the connecting thread that was to run through all the Alien sequels, making it the first movie series to be focussed on and powered by a female protagonist.

The movie’s auteur, Ridley Scott, decided to quit the franchise while he was ahead – until now. Perhaps the temptation to answer some of the questions his first movie posed and to tie up some of the threads left hanging, was just too strong. So, 33 years later, Prometheus arrived to provide us with answers but generally only furnished us with further questions. Now what can we expect from Prometheus 2?

“You’re what? You’re still collating? I find that hard to believe.” Ellen Ripley

Gamble on a Good Film: An Overview of How Gambling and Casinos Are Depicted Within the Film Industry

Five Films To Watch If You Enjoyed Guardians Of The Galaxy