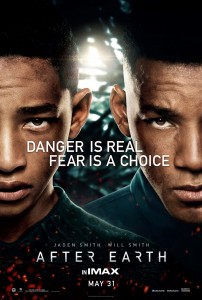 It is odd to be so let-down by a project containing so many working parts that you can usually believe in and rely on or even possess a major part that you’d like to believe might start working to the best of its abilities again. Everything about the latest Will Smith sci-fi film,After Earth, though feels lazy and re-hashed as if they were coming up with things to do, obstacles to overcome on the spot and relying on cheap special effects to fill in the rest come post production. What is most irritating about this entire project though is that it so effortlessly takes itself seriously yet could not come off as more immature. There is a spark at the very beginning where it drops us right into the middle of the action, where for a split second I thought this might have deserved more than the critical lashing it received gave it credit for, but just as that thought entered my mind we began getting voice over from one Kitai Raige (Jaden Smith) that gave us the back story of who his father was, where we were at presently, why the human race was there and several other details of exposition that could have just as easily been explored and revealed in a more interesting movie. Also take note that this piece of dialogue and every other line no matter who it was delivered by is spoken in an accent that seems to evoke every impersonation I’ve ever heard of John F. Kennedy. Like much of the film, this idea of having every human offspring who lived past the days of calling earth our home adapt the same speaking patterns and dialect is interesting, but the execution proves more distracting than anything else (and this is coming from a guy who didn’t mind the gibberish talk in Cloud Atlas). Thus this is only one of many complaints I began to log away as After Earth continued to play out in what ultimately feels very brief and more disappointingly, unaffecting. I’ve always liked Will Smith and thought of him as a charming, charismatic guy that was always fun to watch on screen, but his character here has none of those qualities and with that persona completely absent it leaves the film feeling equally as hollow as his Cypher Raige.

Based on an original idea from the elder Smith the script has been penned by The Book of Eli writer Gary Whitta with a co-credit going to director M. Night Shyamalan. While this is the first project Shyamalan has participated in where he wasn’t the sole writer this at least gave me hope that Shyamalan was both able to accept his last few efforts were not well received while hopefully promising a solid action/adventure film from a director many have lost hope in; that this may be, at the very least, an indication that all those whisperings about him being “The Next Spielberg” what feels like so many years ago now might still have some truth to them. Unfortunately, it seems Shyamalan’s heart was in this one as much as the special effects teams were. There are moments, certain shots, where you can see the aspirations of a caring filmmaker are in  motion, but these moments are too few and far between to have created anything consistently engaging. The good news for the director is that he is not the main person to blame here. As he doesn’t hold the responsibility of coming up with the story or penning the entire script the films weakest link cannot be completely pushed off on the easy target. That weakest link being the story had me wondering absolutely nothing from the opening moments to the final shot. Having seen the trailer, you’ve seen the entire film and while you might wonder if the film will take an alternate route about halfway through it is actually only you hoping it will get better, be a little ballsy, while knowing deep down inside it is going to resolve every conflict it has already set up and likely in the most predictable of ways. Without giving anything more away I’ll just say that after coming out of the theater I couldn’t have felt more like I’d seen the most generic movie they could have come up with surrounding the premise. Simple as that. Take away the lifeless acting and the characters we don’t come to care about, take out the cheap and rushed special effects and you are left with not a story, but a kernel of an idea that was never fleshed out and seems more the outcome of someone being unable to be told no than anything else.

What little story there is centers around General Cypher Raige as he returns home to the planet Nova Prime (yes, all the names are that ridiculous and cheesy) after one of his many missions. Upon his arrival his son Kitai has been training and working hard to accomplish the rank of Ranger but has failed to do so. He feels pressured to make rank and prove himself not only because his father can accomplish what is known as “ghosting” but because of an event in his families past he feels he must atone for. On Nova Prime the human race is not alone though and are threatened by monsters known as Ursa’s that are blind but can sense and kill humans by the pheromones produced through fear. The Prime Commander Cypher Raige is the original “ghost” who is so completely free of fear that he is invisible to these monsters. Too bad this lack of fear also makes him a solemn, cold figure that his son fears and his wife barely knows. We only get a quick glimpse at Cypher’s relationship with wife Faia (Sophie Okonedo) and her pushing him to better get to know his son whose life he’s been absent from while saving the rest of the human race. As the trailer shows us the Prime Commander takes Kitai on a mission with him only to have their spaceship come in contact with an asteroid field that causes the ship to crash land on earth 1,000 years after being deserted by humans. The planet now has animals that have evolved into bigger and more ferocious versions of what we presently know and the climate has changed to the point most of the planet freezes over at night. As Cypher and his son are the only survivors of the crash and both of Cypher’s legs were broken as they plummeted to earth (which is one of the many CGI shots that is completely laughable) it is up to young Kitai to make his way across the dangerous terrain to get the beacon that is in the other half of the ship and signal for help all while conquering his fear, overcoming his past and pleasing his father in the process.

While I have always enjoyed Will Smith’s work I was reluctant to allow Jaden to become a star simply on the terms he was the spawn of one of the worlds biggest movie stars. I didn’t mind Pursuit of Happyness because of how young he was and it seemed more a casting choice that aided the story and made that story connect on a raw emotional level, but here as he is much older, had a hit all by himself (the surprisingly not so bad Karate Kid re-make) and is asked to act opposite green screen almost the entire time it exposes how limited he really is as an actor and how much more experience he needs before taking on such a daunting task. Jaden is by himself about 75% of the film and responds only to his fathers voice and not his presence. This would be a tough thing to do for any actor, but one as inexperienced as this who only scored the role because of who his father is gives us plenty of opportunity to see the cracks in the character development and weakness in story arc. The film is a game of levels that has Jaden going from one challenge to the next until he reaches the final boss and has to defeat him and win or lose and die. As this is a major summer film with A-list stars and a $130 million budget we know which way it will go. With Shyamalan serving as what feels like nothing more than a director for hire, Will giving a performance that he could have shot in a matter of days and Jaden carrying a movie he is ill-equipped to hold on his fragile shoulders there is nothing much the movie can offer us. The location scouts and production designers should be commended for not resorting to the ruined earth where cities are abandoned and emptiness swallows up everything else, but instead chose an almost rehabilitated planet where the lush greens of the forest are everywhere but the early inclinations of trying to make some kind of statement about our abuse of the planet are forgotten almost as soon as they are spoken. There are no bigger consequences here and even if Smith is trying to say something about his denied Scientology religion that matters little as well because there is nothing to grasp onto here other than a story about a father and a son that crash lands long before the literal crash that happens only twenty minutes in.

Grave of the Fireflies

Now You See Me