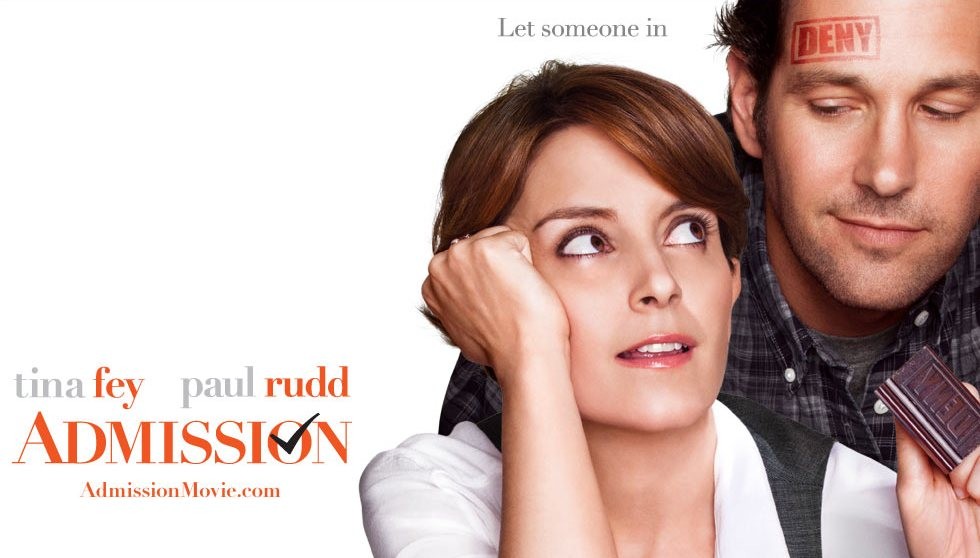 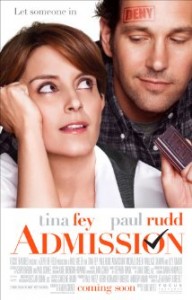 Admission is something of a lazy movie. There is no energy about it, no zeal that ever gets you too excited about watching it, but worst of all is the fact that these boring attributes make us not care for the characters in the story. If I’m telling the truth I kind of had that feeling about the film from the beginning. It felt slightly rushed, a small almost indie film that just had too big of movie stars in it to escape the glow of mainstream marketing. Thus is born the only solid reason I can find in getting behind this film: those movie stars. When you have someone as charismatic as Paul Rudd and as appealing as Tina Fey in a movie together, and for the first time no less, it is easy to get excited. They are both actors with great comedic personas and are figures many feel relatively easy to relate to. That small percentage that seem to “get it” and have a quirly way of perfectly putting into words why they are smarter than everyone else while the outside world continues to fall apart despite their observations that seem obvious and are always funny. They are almost elitists without coming off as assholes who think they’re better than everyone else. Those personas usually suit them well and have made them the bankable names they are today, but all of that charm and wit is nearly absent from this flick as only the rare smile finds its way onto your face when that true comic ability shines through the stilted characters these guys have been burdened with playing. That may all sound a little harsh and as if I’m harping on the actors, but they are the only reason to really see the film unless you are just super interested in the college admissions process. Other than that the script features mommy issues and a forced romantic angle that the movie would have become better without. I liked the film well enough because I like the people involved, but I don’t care to ever see it again as doing that would be more effort than it feels they put into making this film.

Based on the novel by Jean Hanff Korelitz and adapted for the screen by Karen Croner the film tells the story of a Princeton admissions officer named Portia Nathan (Fey) who comes across a young applicant named Jeremiah (Nat Wolff) coming out of the first graduating class of a new, alternative school run by John Pressman (Rudd). The hook here is that John believes Jeremiah might be the son Portia gave up when she was a college student. Still, even as this is toted as the main conflict of the film it seems to take a back burner to several other subplots that are either not as interesting or are never given the attention the actually deserve if that storyline was really going to be developed. John has an adopted son, Nelson (Travaris Spears) who and who is tired of moving around with his nomadic father. Portia has a serious relationship with a fellow professor (Michael Sheen) that seems to be going nowhere and is also dealing with the competition from fellow admissions officer Corinne (Gloria Reuben) for the position of dean of admissions that will be left open at the end of the year. Then there is the whole deal with her mother (played hilariously by Lily Tomlin) and the neglection she seems to have felt her entire childhood with her mothers supreme feminist way of looking at things and lack of intimacy for any aspect of their relationship. This naturally seeps into the way Portia feels about Jeremiah when presented with the idea this could possibly be her son. On top of that the movie forces Portia and John together out of convenience rather than letting any type of chemistry form between them. Not that Fey and Rudd don’t make it work and elicit a sturdy enough common ground for these two to at least try it out, it never really feels like it’s going to last simply because it is so convenient and it is so forced. The whole script is just scatterbrained and not able to find a central theme it wants to lock onto and follow to deliver a successful narrative on at least one of these storylines.

Directed by Paul Weitz the guy simply seems to be off his game as of late. The guy had a string of well received and pretty popular hits in the late 90’s through the mid 2000’s. I mean, his debut was American Pie for Gods sake (though he didn’t return for any of the sequels) and he then made critical darlings like About a Boy and In Good Company. Those latter two seem especially appropriate to mention as they are honest, adult comedies that resonate with what would be the majority of viewers while teaching valuable life lessons without talking down to the anyone. Admission isn’t able to do this so much as it is able to confound its audience. If you saw Weitz’s effort last year called Being Flynn you may have noticed the similarities in tone and some even in theme, but while that film had a more serious side to it I couldn’t help but think of it as Admission played out. Ultimately they are both these very sad tales about very lonely people and how their lives never panned out to be what they expected, but more how they never turned out to be the important people they expected themselves to be. This should have been the main concern of the script, the very inclusive world of the person at the center of the story rather than trying to bother with making it a comedy of satires about the college admissions process. Though that world is clearly ripe for that sort of thing this film never hits its funny stride and instead comes off as more of a weird little movie that doesn’t know what to do with itself rather than a nice meditation on this woman’s crisis and a secret she’s kept for so long that its detoured her life more than she could have ever thought possible. That type of character study, had it been made, would certainly be a film I’d be interested in seeing even if it didn’t have the pleasure of starring Fey and Rudd anymore due to the more poignant material.

Still, one of the only reasons I didn’t come out completely unaffected by the film was the presence of those two people in the film. I like them, plain and simple as that and I can’t help but be entertained by Paul Rudd doing his usual thing and the small quips of Fey’s charming cynicisms that she occasionally throws out. Besides that, there are a ton of other people in this movie that are appealing no matter what movie they might  be in and that certainly didn’t bother me when the story began to fall apart. At least it had people like Lily Tomlin, Michael Sheen, Wallace Shawn, and Sonya Walger (Lost) playing bit parts that produce a good enough of amount of small laughs to keep the brisk film flowing. Fey’s scenes with Tomlin are especially endearing though they open up a can of worms that never truly feels resolved and though Michael Sheen is doing his whole scholarly deal here he probably could have been cut completely as Portia already had plenty on her plate and a reason to force herself to fall for Rudd’s John wasn’t necessary. It should also be noted though that the young actor Nat Wolff who plays Jeremiah plays it well, never making him so odd to the point of ridiculous, but helping us understand why he should be given a shot at such a prestigious education. It is a small role, but a charming one and may be that bit that sticks with you most. I wanted to like the film more than I did, but as I said in the beginning it is a rather lazy movie and one that will, for the most part, disappear from your mind shortly after you’ve walked out of the theater. It’s suitable for a rainy Sunday afternoon when you’re locked into the couch, but there is no need to run out and try and enroll immediately.