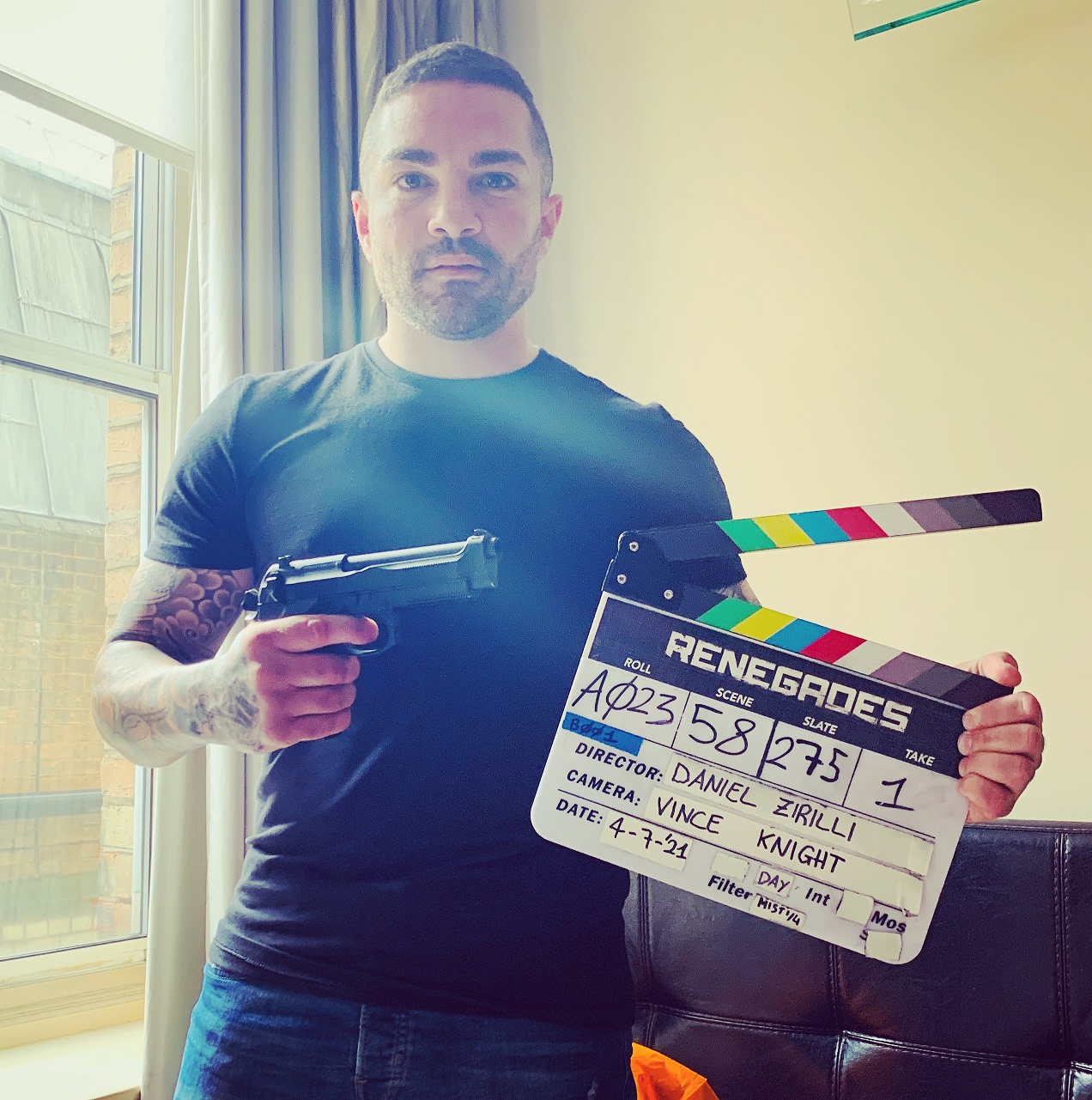 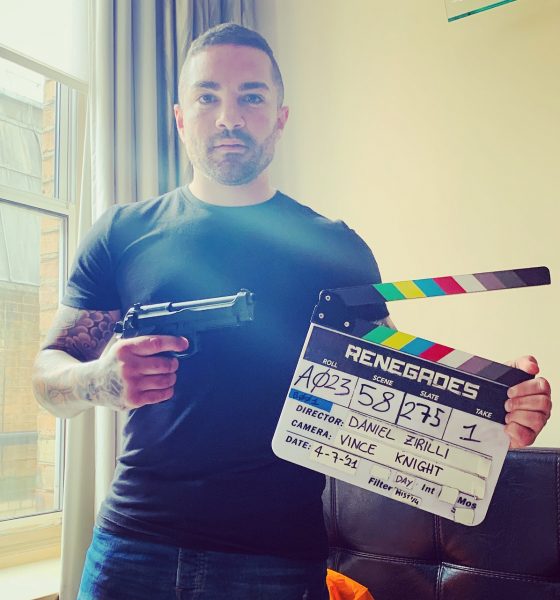 Being no stranger to playing a ‘bad guy’ himself, Nemesis and Renegades actor Andy Gatenby took time out from filming to list his top 10 favourite film baddies of all-time.

The 34-year-old rising star from Portsmouth has just finished filming Renegades – a London-set revenge movie, which sees a quartet of ex-Special Forces vets take on a violent International gang that killed their comrade, produced by Shogun Films.

The married father of two young children said of his latest role, “I play a guy called Andre and he’s one of the gang members. It was a good, fun role to play. Getting a chance to play a baddie in a film is always fun!”

It follows his role as a violent enforcer to award-winning actor Billy Murray in British thriller film, Nemesis, released last May.

“I sort of get these roles a lot, to be honest, because I’m an ex-pro boxer, covered in tattoos, and a bit rough around the edges!” he joked. “But you just can’t beat a baddie in a film, they always seem to be the ones to get the most attention, I find.

“As an actor, it always seems to be more fun playing a bad guy, and a good baddie will always remain in your memory for the rest of time.”

Andy retired from professional boxing in 2014 following an eye injury and immediately pursued a career in acting straight after hanging up his gloves as an unbeaten featherweight.

‘Gats’ has a real passion for the silver screen, so check out his list of his favourite film villains of all-time:

The Wicked Witch of the North: “There’s just something so sinister and scary about Princess Mombi running about with no head! Just picking one up as she needed it scared me to death as a child. And then when she used to scream and set off those horrible wheelers, they were too much for me back then! She was a frightening, powerful actor in a film that, for me, was well ahead of its time.”

The God of Mischief: “Loki is one of my favourite baddies ever! He’s so bad at being a baddie that he makes you want him to win. He’s the god of mischief, but he’s so likeable that it doesn’t matter that he’s bad to the core, I find I always forgive him for every bad thing he does.

Actor Tom Hiddleston has done an amazing job by getting cast as the bad guy, but ending up being more likeable than the good guys. That takes some skills.”

The Jew Hunter: “This was such a good performance from Christoph Waltz in a brilliant award-winning film with Brad Pitt. He was effortlessly bad, whilst not even trying to be; just a bad character to the core. With this performance he shows you that less really is more, as he controlled the room at times with just a single stare. He won The Academy Award and The Golden Globe Award for best supporting actor in this film and it’s easy to see why.”

7. Sir Anthony Hopkins as Hannibal Lecter in The Silence of the Lamb

Hannibal the Cannibal: “Cunning, clever and devious, this psychopath keeps you gripped throughout the entire film, sat firmly (and uncomfortably) on the edge of your seat. Not knowing what he’s going to do next just made you feel edgy watching him. Just his wild eyes looking at you with no face mask on was even sinister and terrifying. It’s an iconic film that I’m sure will still be punching in weight for many, many years to come.”

Boy’s Right-Hand Man: “I remember first watching ‘Little Monsters when I was about 7 or 8 in age and I was never able to sleep without checking under my bed for monsters ever again.

The thought of Snik coming to get me when I was asleep used to make me have such nightmares. His big blue head with no neck and huge boils over his face and his husky, smokey voice was just too much for me as a kid. I always had a torch next to my bed in case the monsters came and wanted a fight with me!”

5. The Shark in Jaws

The Man-Eating Great White: “I have always considered Jaws as one of the most iconic and fearsome baddies in any film ever made. 46 years on and I still know people who are afraid to swim in the sea in case Jaws is in there lurking. And come on, don’t pretend that going to the swimming pool was ever the same again!

I completed a charity swim from Portsmouth to the Isle of Wight in 2017 and a week before the swim, all over the national newspapers were articles about a great white shark being seen in The Solent. The thought of it was terrifying to me, but we completed the swim anyway, then afterwards it emerged that it was the anniversary of the Jaws film and some joker had made the claims up to all the papers that he’d seen one. The legend continues…”

4. Lena Headley as Cersei Lannister in Game of Thrones

Queen of the Andals and the First Men: “What a fantastic series Game of Thrones was. One of my favourite TV series of recent times, but I absolutely couldn’t stand Cersei in it, no one could! I would watch each episode in the hope she was going to be brutally murdered by one of the heroes of the series. It took eight seasons and five episodes for her to die, but her character was brilliant for this exact reason. She reminds me of a boxer, one like Chris Eubank, who persistently annoys fans to the point they only tune in to watch in the hope that they lose badly. She was the most ruthless leader to ever sit on the Iron Throne.”

3. Heath Ledger as The Joker in The Dark Knight

The Man Who Laughs: “Every time I watch The Dark Knight, his standout performance just gets better and better. For me, his unique portrayal makes him to be the best Joker in any Batman film ever made, and there’s been quite a few now. His screen presence was second to none and captivating. A true screen acting masterclass.

The Siberian Express: “Obviously I’m a bit biased here as a former professional boxer, but come on! Rocky has got to be one of the biggest heroes in any film ever made.

His underdog story of rags to riches and world domination is the stuff of every boy’s dreams. But this list isn’t about heroes, it’s the exact opposite, and although Rocky had a different antagonist in the opposite corner for every film, but my favourite was always Dolph Lundgren as the indomitable Ivan Drago.

The Soviet-Russian powerhouse was an Olympic gold medalist with an amateur record of 100 wins and no losses! He stood at 6 foot 6, a fearsome heavyweight boxer with the physique of a Greek god and a team of scientists pumping him full of performance enhancing drugs. He killed Apollo Creed and gave Rocky brain damage, which earned him the terrifying nickname, ‘Death from Above’.

“If he dies, he dies”, has to be one of the best film quotes ever, and I know for a fact I’ve repeated it a thousand times myself.”

1. Alan Rickman as The Sheriff of Nottingham in Robin Hood Prince of Thieves

Lord Sheriff George of Nottingham: “Alan Rickman, an extraordinary actor that could be in this list for several other roles he’s played over the years, such as Hans Gruber in Die Hard, but my favourite is his outstanding performance as The Sheriff of Nottingham.

It’s one of my favourite films of all-time. It was huge at the time of release, especially with the accompanying theme tune from Bryan Adams that was number one for 16 weeks. It was a film that captivated me when I was a child because he was such a legendary character in history, stealing from the rich to give to the poor, and who hasn’t owned a bow and arrow during their childhood and pretended to be Robin Hood?

For me, Alan Rickman stole the show. A good baddie is someone who you really don’t want to win in a film, but also scares you, and I hated the Sheriff of Nottingham. He was gloriously grisly and brilliantly bad.

The “So Bad It’s Good” of the Superhero Movie Genre