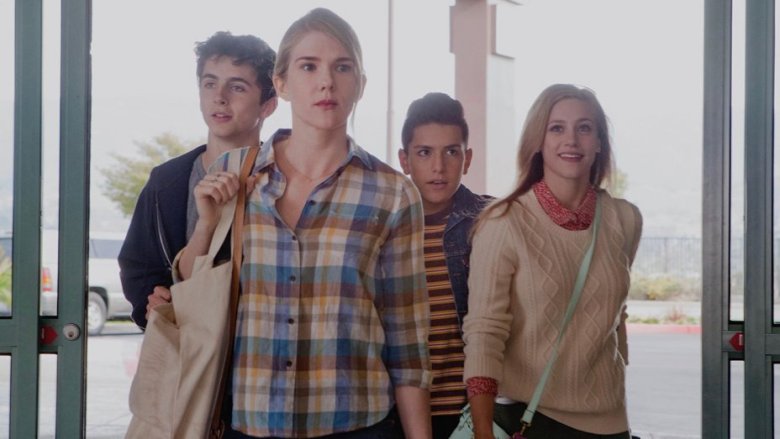 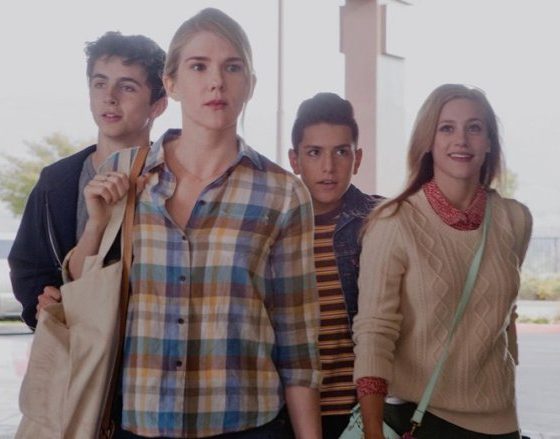 “Well I tried to fake it, I don’t mind saying, I just can’t make it”

From the front of the car Lily Rabe and Timothee Chalamet belt these naff lyrics (‘Sister Golden Hair’ by America), which encapsulate an element of what the 2016 film Miss Stevens is about: the façade a teacher puts up in front of her students, and the struggle which goes on behind the mask. The car is cramped and close quarters. Anthony Quintal elegantly flails his arms around, Lili Reinhart observes with embarrassed disapproval. The dynamic is established.

In director Julia Hart’s exploration into “what it means to be an adult and what it means to be a kid”, she draws on her own experience of teaching to create a convincing and touching commentary on the imperfect teacher, and consequently the imperfect human. Teacher Rachel Stevens takes three students on a trip in her Mother’s blue Volvo station wagon to an interscholastic drama competition. The film centres around these four characters, and is set over three days, resulting in a narrow and intimate snapshot of their lives. Whilst the characters adopt some typical indie teen-movie traits, what sets the film apart is the dynamic built between them, which is believable, tender and, at points, complex.

Lily Rabe gives the most memorable performance, playing a young English teacher riddled with her own personal struggles, and desperate to make the best of her students. Her character is passionate, sympathetic, and private, despite consistent attempts from the teens to delve into her personal life. Timothée Chalamet plays the troubled lone-wolf Billy in an impressively un-cliché, energetic and sincere performance. Billy conducts himself with confidence, and is fiercely talented in the performing arts, although unmotivated in his academic studies. I cannot help but wonder if the inclusion of his Death of a Salesman monologue was an opportunity for Chalamet to show off his extreme competence on stage, especially as the drama competition itself seems to be of little contribution to the film’s overall message.

Lili Reinhart (Margot) and Anthony Quintal (Sam) provide comic relief through their surface-level light performances, but prove themselves to have infinitely more depth. Margot is intrusive, organised and at points irritating, but her character is validated when she becomes aware of her own lack of proficiency on stage in the duration of the film, resulting in an emotional outburst directed at her teacher through the wall of a toilet cubicle. She is also used as a vessel to communicate the importance of arts funding in schools, in what I speculate to be a shameless political statement. Sam is sassy, dramatic and openly gay, made obvious by his misadventures with a boy from a competing school. He’s overtly lovable and genuine, binding the students together in a playful way. Despite their differences, there is a camaraderie between the students which is satisfying for the viewer.

As someone who, in school, was continually curious about their teachers’ personal lives, I found the idea of boundaries and the separation of the professional and the personal in this film fascinating. The relationship between Miss Stevens and Billy skirts along that boundary, tipping onto the side of inappropriacy, without ever falling into it. A climate of candor is established between the two, partly down to Miss Stevens’ insight into Billy’s mental health battles. As a result, she opens up to Billy about her own life, and then panics, fearing over-intimacy. How is it that a student can know so little about a teacher when a teacher has access to so much of a student’s personal life?

Miss Stevens was subtle, quietly funny and sensitive. It had a similar, feel-good effect to other American road-trip films I have seen, however it told a story which has not, in my knowledge, been actualised on screen before. A story of a teacher who, in Julia Hart’s words, is “flawed” and “complex”, a teacher who is “sometimes inspirational and sometimes bad.” This is the teacher that we all know, a teacher not from the screen, but from our own, very real lives.

Five Iconic Movie Posters Have Gone Down in History