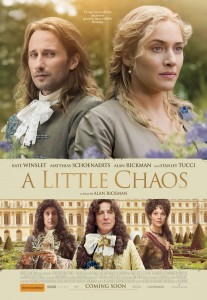 When Madame Sabine De Barra (Winslet) is chosen as the landscape architect of the still-to-be-completed palace of Versailles. she has little time for the classical ordered designs of the man who hires her; the famous architect Le Notre (Schoenaerts). However, as she works on her creation, she finds herself drawn to the enigmatic Le Notre and forced to negotiate the perilous rivalries and intricate etiquette of the court of King Louis XIV (Rickman).

Rickman makes his return to the Director’s chair after nearly 20 years since his last forray on the other side of the camera and whilst many of you may be put off by the premise of the film, it becomes clear that this is far more than just a feature length episode of ‘Groundforce’ in period costume. It has heart and drama at it’s centre, carried by the strength of the actors on-screen.

Winslet creates a persona in which the audience can connect, male or female. We can see her struggle both in her profession and as she is reminded of the trauma of her past.Schoenaerts who we first saw in The Drop, makes a stark genre-change to portray Le Notre and does so with relative ease, his chemistry with Winslet’s De Barra is clear. Stanley Tucci’s courtesan character offers some of the more light hearted moments of the film, whilst also being key in linking the characters of Versailles. Rickman’s portrayal of Louis XIV is used in key moments, yet whilst he is often a presence felt more off-screen than on, his appearances provide some of the more key moments of the film.

The film flows from scene to scene with the help of a beautiful score by composer Peter Gregson, subtle and perfectly incorporated throughout, matching the on-screen beauty of Versailles. Despite the slightly over-extended running time of almost two-hours, the film moves at a steady pace, dragging it’s feet slightly in the opening half, it becomes far more succinct in the second. Perhaps the historical accuracy is questionable but it’s

‘A Little Chaos’ is an interesting cinematic experience, as while the content may not prove to be to everyone’s taste, there’s far more beneath the surface of Rickman’s film than meets the eye. It blossoms into a thoroughly enjoyable experience. Rickman’s experience in-front of the camera and the knowledge he has gained under the tutelage of the many great Directors with whom he has worked shines through. There is no real villain as such, while Le Notre’s jealous wife provides much of the conflict, it is King Louis XIV’s expectations that the characters struggle against as well as their own demons, be they in the past in De Barra’s case or in the present in Le Notre’s. We see the human element come to the fore despite the exquisite dresses, wigs and make-up used to hide the real emotions of the inhabitants of Versailles.

An unexpected delight, well-directed with a stellar cast. A Little Chaos brings the beauty of Versailles to the big screen.