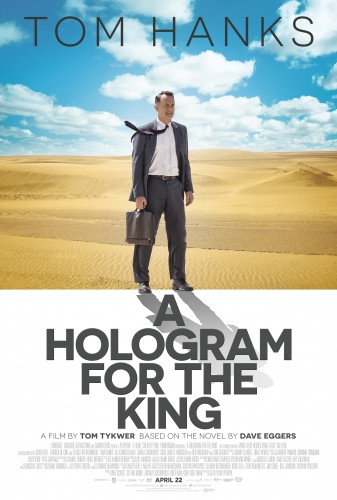 Any film that chooses to embrace Electric Light Orchestra, or for that matter acknowledge how wonderful ELO truly is, is okay in my books. This bodes well for A Hologram for the King as it seemingly has a lot to offer, but ends up offering as much in such a fashion that it feels it’s holding back on the best, most interesting stuff. I haven’t read the novel by Dave Eggers on which this film adaptation is based, but from being familiar with Eggers style and having his influence be strongly present during my college years I can see how this book, which was published after I graduated from college, would seem like a natural progression for the writer. He is getting older, so too are his protagonists, but the existential questions still remain-just in different forms and from different perspectives. Though I haven’t read Eggers’ novel it is easy to see the main ideas and themes the author was addressing come through in the opening moments of director Tom Tykwer’s (Cloud Atlas, Run Lola Run) film. Tykwer takes us through the deconstruction of what more or less defines success in Western culture and strips it away from our protagonist before dropping him into Saudi Arabia where success and satisfaction are still measured in many of the same ways, but where society has a more narrow view of how those rewards should be distributed and touted. Still, the film doesn’t look down upon its main setting so as to say we have it all figured out in America and they should take note, but rather it displays the still very present complications and struggles alive within a well to-do, middle-aged white guy that should seemingly have it all, including any opportunity he desires. Most writers place their surrogates into characters who mimic themselves which translates to an abundance middle-aged white guys, but here the choice to have the lead character fit this profile is a strategic one, a decision that greater emphasizes the difference in having it all and having what is meaningful. I’m still not sure if there is an analogy or metaphor that we should interpret from the title, but it seems it should naturally have an underlying meaning. I bring this up because much like the title of the film the contents feel as if there should be more to them, something that anchors the ideas and makes them feel more substantial; effecting viewers in greater ways. Instead, A Hologram for the King simply skims the surface, albeit an interesting surface.

As mentioned in the previous paragraph we meet our protagonist, Alan Clay (Tom Hanks), who is a washed-up, desperate American salesman that is still struggling to hold conversations with his seemingly irrational ex-wife and worrying about the financial ways that will allow him to keep their daughter, Kit (Tracey Fairaway), enrolled in her Ivy League college. Clay was once on the board of Schwinn and seems to have more or less spearheaded the decision to outsource their production lines to China which inadvertently backfired on him after the Chinese company took the design, slapped a different logo on it, and sold bikes worldwide for a much cheaper price (I’m probably getting some of that wrong, but that sounded like the gist of it). In attempting to put his life back together Clay is now working for an IT company who sends him to Saudi Arabia to sell a holographic teleconferencing system to the Saudi government. Clay only got the exotic job for (kind of) knowing one of the King’s relatives and due to the fact his skillset is more of the intangible kind wherein he excels at making people feel comfortable and setting the right tone for a welcoming atmosphere he admittedly knows nothing of the technology he’s pawning off on these people. He’s in over his head. Clay seems to be aware of where his talents begin and end though, making this an interesting role to play as Hanks is asked to balance a mentality that is both striking while simultaneously faltering. A man who is as confused and frustrated as he is struck by the wonder of his new surroundings and their inherent artistry. Clay is all of these things and we can see all of these things on Hanks’ face, but never does any of this make him uncomfortable. Instead, it is through our lead characters warm and pleasant nature that we are taken through Jeddah and the King’s Metropolis of Economy and Trade to a destination that allows for Clay to not necessarily find peace or come to terms with his reality, but at the very least allows him to find a driving force that once again makes him feel inspired. This feeling largely translating through the film itself if only, like Clay’s skillset, to a certain extent.

What drives these adventures and eventual epiphanies are a few key characters that, without them, the movie would surely falter in attempting to convey its major themes. First is taxi driver Yousef (Alexander Black) who serves as slight comedic relief, but more as a tempered guide to this unfamiliar culture, for both Clay and us, who finds Clay’s fascination with Saudi Arabia equally as fascinating. Yousef has a different style or genre of music for Clay to listen to every morning when he enters his cab. Whether it be Chicago, the aforementioned ELO, reggae, or Elvis there is a tone immediately set by Yousef’s choices that we know will either compliment or contradict the state of mind Hanks’ character is in that morning. Through this slight buddy comedy relationship audiences are able to also become familiar with the landscape while also adding the more subversive layer that highlights the fact that even in as exotic and foreign a location as Saudi Arabia, there will become routine. Much of the editing choices here are used to emphasize this aspect of life and it seems that, despite routine being what allows Clay to feel assured and comfortable in his role (he always has a joke ready to break the metaphorical ice), he is in many ways seeking to outrun such trappings. Routine is what defined his old life and so to find a drive again, to re-discover himself if you will (for lack of a less cliché term), he must run away from as much. It is here that Mr. Clay is destined to meet Dr. Zahra (Sarita Choudhury), a female doctor in a land where there are not many female doctors. What leads Clay to this woman you might ask? A hump on his back, a burden if you will, that continues to grow and become more bothersome. This cyst is clearly a metaphor for all of the weight Clay continues to carry pertaining to his issues from home, but that it leads him to Zahra and that a relationship develops between the two of them that in turn gives Clay a sense of clarity and the idea he has much to look forward to, much time to still accomplish things, is very much a discovery. It is an introduction into his life that is unexpected and welcome and most importantly, anything but routine.

The chemistry between Hanks and Choudhury is palpable. They speak few audible lines to one another, but the connection established through their eyes and body language is undeniable from the moment she walks into the room. Furthermore, this is the type of movie I imagined Tom Hanks making well into his career when I imagined as much as a young child watchingForrest Gump. That isn’t to say there is nothing surprising here, but more that this type of role suits Hanks well. The plot does in fact make some unexpected deviations despite being able to see the outcome go one of two ways. In that regard, the film doesn’t give what appears to be the main objective the win, but more gives our protagonist a feeling that he’s no longer treading the same ground he’s covered before. Rather, a fresh start allows the baggage he still carries to feel a little lighter. Key to this being that we, as a human race, like to find things to blame our problems on, but with A Hologram for the King Tykwer is demonstrating (as I’m sure Eggers was as well) the technique of embracing such shortcomings; the simple idea of going backwards to move forward, but in such an elegant way that the idea is able to be conveyed in a manner more profound than what that anecdote reduces it to. Sure, one could easily label this film as another journey of existentialism through the guise of a middle-class, white, American male, but there is indisputably more heft to the journey than one might expect given the familiar set-up. By making Alan Clay a man lost in an unknown world-a man at the center of a culture clash-who is able to come to interpret meaning and purpose in things he might have never known or recognized otherwise, is enlightening to a surprising extent. Having what is seen as common (that strategic decision to have our lead character fit a certain profile) juxtaposed with visuals of barren cities still under construction, with sand stretching for hundreds of miles, and a haunting feeling of disconnection accompanied by Johnny Klimek’s wonderful score melds this entire mentality of remaining amiable in the most dire of circumstances into a feature length exploration of how we continue to survive despite. It’s only too bad the film doesn’t feel as inspirational as Clay’s realizations or we might have had something truly special on our hands.