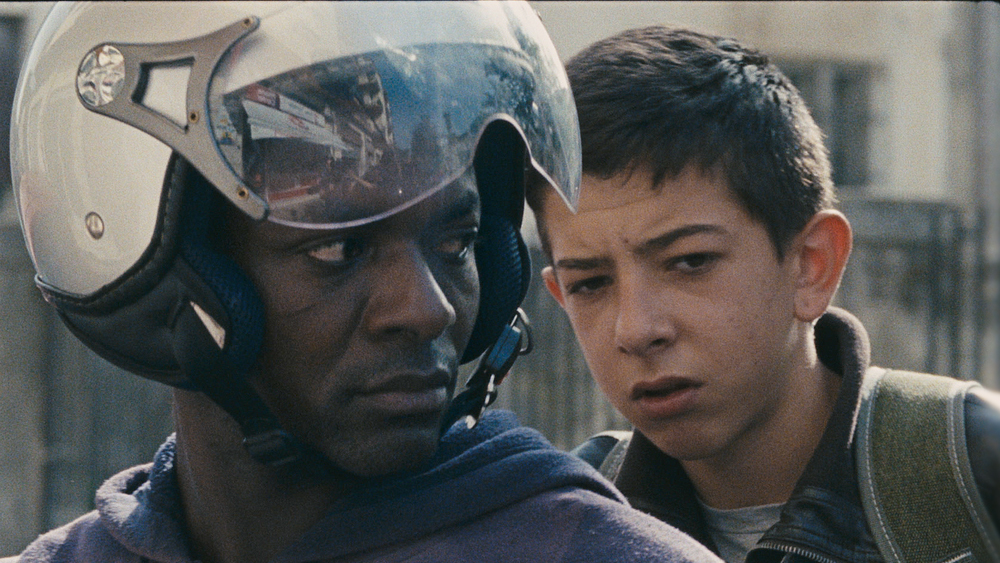 Jonas Carpignano’s second feature A Ciambra was praised all around international film festivals in the last few months. It even brought home the Europa Cinemas Label Awards at last year’s Cannes film festival.  Bringing back many protagonists from his previous feature Mediterranea, with A Ciambra Carpignano takes us to a small village in Calabria where Romani, Italian and African immigrants communities cohabit.

In the small Romani community of Ciambra, 14 years old Pio is desperate to grow up. The film starts us off with groups of young children, running around Pio and along the village streets, smoking. But Pio’s attention quickly shifts to his older brother, Cosimo, whom he follows everywhere.  When his brother gets arrested along with his father, Pio is determined to find a way to provide for his family the same way his brother did, through thefts and petty crimes.  Pio’s goal is clear but his young age rapidly becomes an obstacle.

Pio makes several attempts but fails.  To help his mother pay the 9000 Euros she owes for electricity, Pio steals suitcases from a stationary train but only gets 50 Euros from a stolen Ipad.

With Mediterranea, Carpignano made a plunge into the European refugee crisis while A Ciambra is more focused on the importance of family and the struggle of growing up. The representation of all different communities is rather used to isolate Pio who seems to be the only one navigating freely within all these differences.

From the start all young protagonists behave as adults would and yet the film overflows with youthful energy. Using real participants from the local community may have had something to do with it. The child’s point of view is emphasized with pop music and vivid colors. The camera moves the same way the children behave, in quick and uncoordinated movements. Carpignano explained that he used pop music to bring the audience closer to Pio. It is a “common denominator”. No matter where we are and what language we speak, “when the beat drops on a song that everyone knows, everyone is suddenly on the same wavelength”.

Pio is surrounded by love and warmth, which only adds to how important family is to him. His mother is the one Pio always turns to for recognition and she always returns the sentiment. But the central relationship seems to be between Pio and Ayiva. Although not related, both Pio and Ayiva share the same determination to provide for their family. Pio’s brother is more of an antagonist, either dismissing Pio or getting him in trouble, while Ayiva cares for Pio and welcomes him in his community.

Pio is an ambivalent character, stuck in between two ages. Resolved to help out his family by any means, he often depends on Ayiva and his motorbike to get around as the speed of trains terrifies him.

Family is strong in Pio but it is not always the one within your own community. When Pio is caught stealing from a friend of his own family, he is banished by his father. Ayiva’s community is the first place Pio looks for shelter, which makes it difficult for Pio when his brother asks him to betray Ayiva for money. Pio struggles but is still incapable of making a decision and so simply does not.

On of the most emotional scene comes towards the end when, still banished from his community, his sister comes to find him. Together they get on a train to steal more suitcases. This time Pio does not get out before the train starts and gets stuck on a moving train that he cannot control.  With the help of his sister the panic goes away.

A Ciambra does start off slowly and the first half of the story is used to establish Pio’s surroundings and the obvious obstacle he faces.  But if you commit you will be nicely surprised. Right at the middle of the film Carpignano inserts magical dream sequences during which Pio comes across visitors from the past. Curious, like most children are, Pio follows.  A reminder that, up until the end and despite Pio’s many attempts, everything in the film points to the fact that Pio is still a child.

But the solution becomes clearer and brings us to the end. After letting go of his juvenile fears, Pio follows his brother to a brothel. The film ends at a crossroad. Pio needs to make a final decision on his own. It is not the ending we wanted (or at least not the one I wanted) but it is definitely the one that Pio needs. The film leaves us hopeful and optimistic that Pio will finally be there for his family the way he wants to be.

There is a warm and youthful energy in A Ciambra that never quite leaves you. Pio is very charming character, whose loving dedication always forgives his childish flaws. It is an emotional coming of age story full of enchanting surprises.

Related Topics:A CiambraJonas Carpignano
Up Next