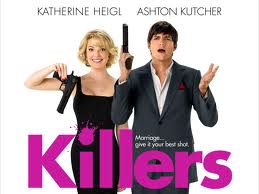 Jen (Katherine Heigl) is holidaying in Nice with her parents (Tom Selleck and Catherine O’Hara) when she meets Spencer (Ashton Kutcher), an undercover CIA agent on a final ‘job’. They’re chalk and cheese and are therefore, under the laws of Rom-Com land, destined to fall in love. So begins Killers, a predictably bland star vehicle in which Heigl and Kutcher get paid the big bucks to flaunt their assets for 90 minutes.

Killers just doesn’t work. It’s not funny, not sexy, not slick. It doesn’t deliver on any level and floats around in an unfunny, bland, sub genre of its own. Never funny enough to raise more than an amused chuckle and not stylish enough to appeal to grownups, Killers really doesn’t know who its audience is and that’s a fatal flaw for this lumbering no-brainer.

The plot (if you can call it that) is held together by a series of ludicrous and illogical scenarios as Jen and Spencer go on the run from a selection of dim-witted assassins. Essentially, it’s a romantic comedy with an ‘edge’ (think less razor sharp and more plastic safety scissors) but it falls victim to a ridiculously contrived script and unlikeable characters . Heigl is nauseatingly uptight and Kutcher has the lights on but really there’s no one home. To say they both phoned in their performances would be an understatement.

The lead characters are also woefully miscast. Kutcher could still pass for 25 and Heigl, although classically beautiful, seems rather too mature for her male counterpart. Even Tom Selleck, as Jen’s safety conscious father, is decidedly lacking in charisma. Don’t get me started on Usher Raymond’s pointless blink-and-you’ll-miss-it cameo as a shop assistant.

As Killers reaches its completely implausible conclusion, it’s clear to see that this is a movie that just doesn’t know what it’s doing or where it’s going.

There’s nothing wrong with Rom-Coms when they work. Even Action-Rom-Coms (Rom-A-Coms?) work. They do. Look at True Lies and Mr and Mrs Smith. Both of these blended comedy, romance and action beautifully and with a touch of class. They work because they have an element of intelligence and a heap of wit. Killers is sadly lacking in both these things.