I happily admit it. I love a good awards show meltdown. The weepier, cringier, more bodily fluids sodden, second hand embarrassment inducing the meltdown is, the better, in my view. You can keep the dignified speeches, the ones thanking the winner’s accountant/agent /zen meditation guru/kindergarten teacher who taught him his hand prints were genius……..zzzzz……., I want wild sobbing. Hysteria. Incoherent ramblings that the person won’t be able to live down for the rest of their life. In fact, it should be mandatory for at least one winner to be carried out on a stretcher, so overcome are they by the utter joy of finally getting their manicured mitts on a golden statuette. If you can’t get hysterical picking up a bald Oscar/doorknob Globe/one eyed BAFTA mask when can you?

This year I’m banking on Lady Gaga to do the tear stained honours. If her reactions to winning a Golden Globe for best song and a joint Critics Choice gong for best actress are anything to go by she is the most likely to go the full gaga monty if she wins an Oscar. Although Glenn Close thoroughly deserves it for a stellar career, part of me can’t help hoping that the Academy goes rogue and at least makes it a tie with Gaga for best actress. I think the entire auditorium might have to be stretchered out from the fallout.

So, in honour of OTT winner reactions, here are 5 awesome ones:

5th: Adele won an Oscar for best original song in 2013 for the James bond theme Skyfall 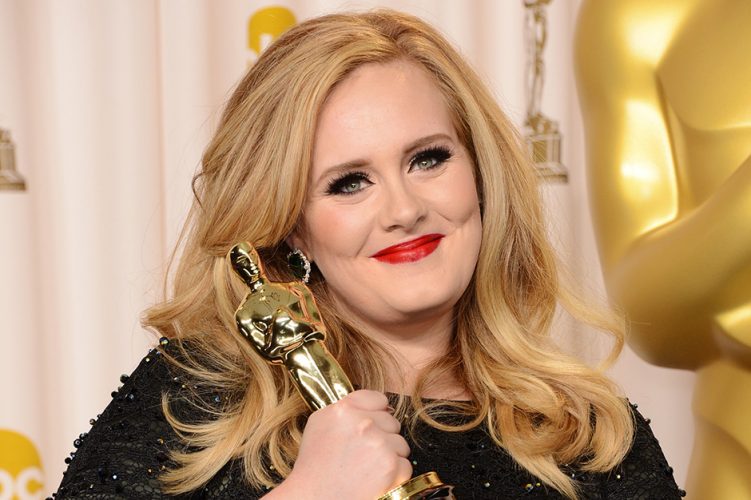 Adele catapulted to international superstardom when she sobbed at the end of her first live rendition of Someone Like You at the Brits in 2011 (I was there and it was indeed amazing) and she is known for having a good cry at her shows so it was inevitable she would blub if she won the Oscar. True to form, everyone’s favourite songstress didn’t let us down. She looked composed enough in her posh frock and bouffant hairdo as she climbed the steps to the podium but getting her hands on the golden man proved too much.  She managed to say ‘this is amazin’ but only got to her first  ‘oh, mah gawd’ before the waterworks broke and she had to leave the thank yous to her co-writer.

4th: Sally Field won a second Oscar in 1984 for her role in Places in the Heart 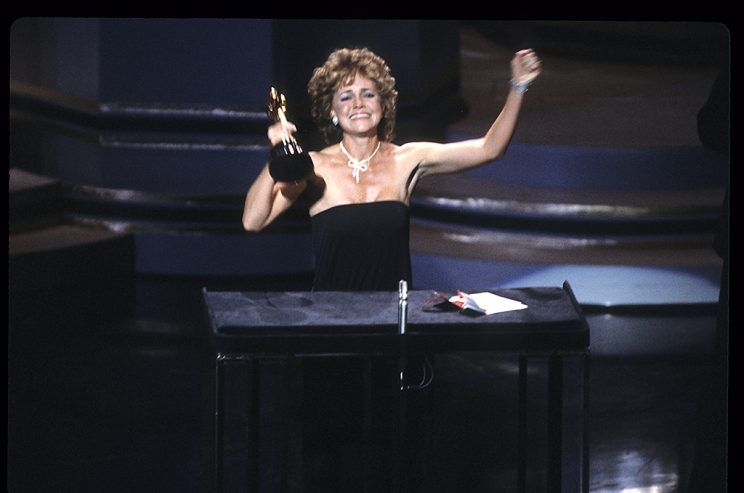 I recommend Sally Field’s memoir ‘In Pieces’ highly but sadly it fails in one respect.  In it Mama Gump doesn’t even allude to her finest moment and the most famous line she has ever delivered : “You like me, you really, really like me.” Since this classic speech there have been all sorts of attempts to rewrite history and re-define it as some sort of existential utterance. Nah! It was Sally pouring her insecurities and heart out to a worldwide audience like we were all her personal therapist in that overwhelming moment. She started well, to be fair. She explained that the award meant so much more the second time (humble brag). She said her thank yous nicely and then, the danger signs began. The lips quivered, the eyes glistened and she was off on an emotional frolic of her own and we all sucked in our second hand embarrassment and went right along with her. 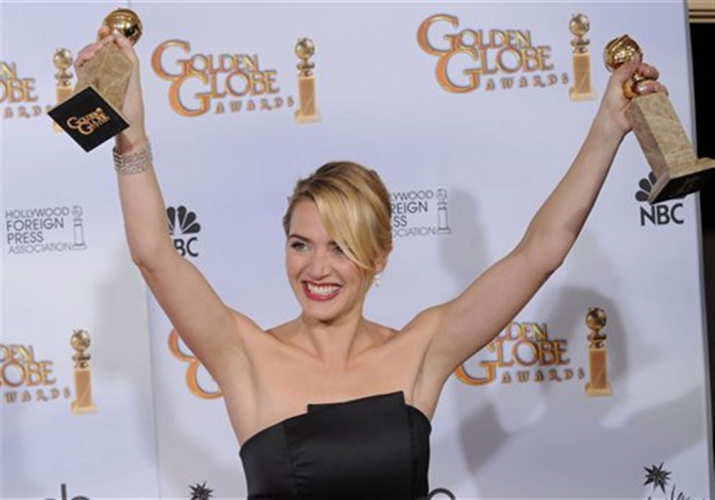 Revolutionary Road was Kate’s second film with her Titanic co-star Leonardo Di Caprio. It was about a more grown up and less watery relationship  – until Globes night. When Kate’s name was called out, she instinctively turned first to Leo and kissed him like he was her husband. As she trembled with emotion in his arms so  did the entire world .Jack and Rose were together again! He didn’t drown after all. Hurrah! After what seemed a good long while,  Kate obviously remembered her actual husband, the film’s director Sam Mendes and gave him a quick peck. She was weeping before she even got onto the stage and you knew this speech was going to be epic. She was hyperventilating so much she clean forgot her fellow nomine Angelina Jolie’s name and declared herself speechless. Nevertheless, she managed a pretty lengthy one – most of it about her love for Leo. ‘I’ve loved you for 13 years,’ she sobbed, pretty much drowning the poor man all over again  in her tears of joy. ‘Your performance in this film was spectacular and I love you with all my heart!’ After gazing adoringly at Leo for a bit, she again remembered the other dude. ‘Oh and thank you to my husband,’ she added, dry eyed.

And just like at the Critics Choice Awards, there’s a tie for first place.

Gwyneth Paltrow won an Oscar for Shakespeare in Love in 1999 and Halle Berry won one for Monster’s Ball in 2002. Rumour has it Gwynnie hid for days after her speech, she was so mortified by the mockery and comic skits it inspired. 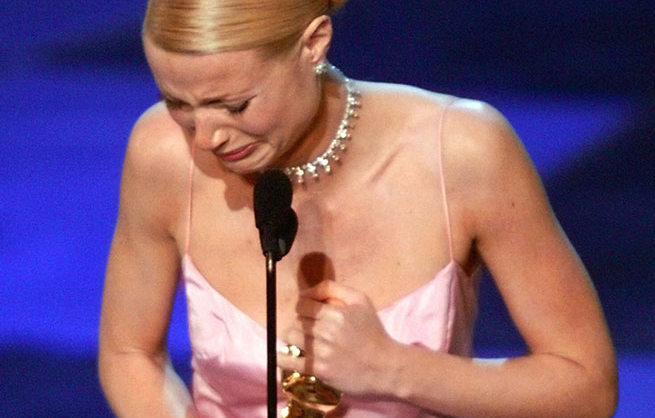 And Halle had to pick up a Razzie and dutifully laugh at herself to atone for her blub-fest.

In fairness Gwyneth started well. She’d already had a mini meltdown at the Globes so was obviously trying to keep it together on the Oscars stage. She even got the word oxymoron into her speech. But when she thanked her ‘godfather’ Harvey Weinstein it was possibly all over. Like a mudslide threatening to gush down and crush all before it, Gwynnie began with some emotional chest thumping. Then she mentioned her parents, especially her father who had had a tough time health-wise and it began to get shaky. When she then added her ill granddad Buster to the mix, the dam burst. Although she ended her speech paying tribute to  two relatives who had died, her tears are remembered as a top cringe-worthy Oscars moment. Somewhat unfair but then Hollywood is all about perception.

Similarly, most people remember that Niagara Falls had nothing on Halle Berry’s tear stained reaction to becoming the first African American (she’s also half white) actress to win a lead actress Oscar. However, her speech was actually quite lovely. “This moment is so much bigger than me,” she said. “It’s for every nameless, faceless woman of colour for whom the door has been opened tonight.” 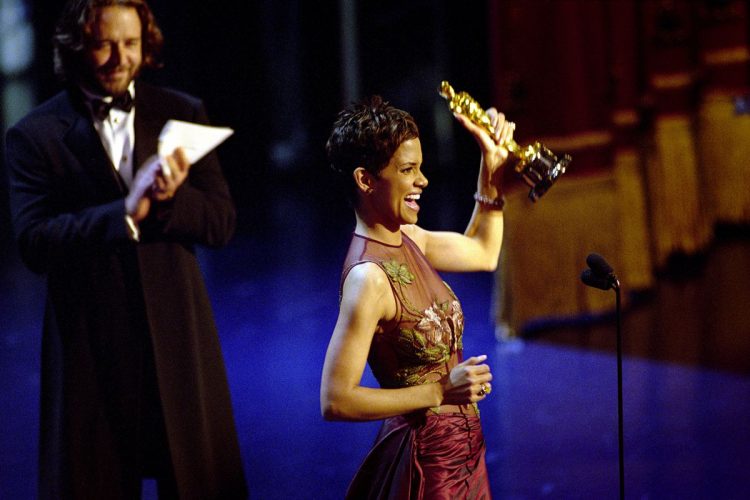 But of course, it’s not the words that anyone remembers. It’s the way Halle reacted when her name was called. She jerked back in her seat, limbs flailing like a beautiful insect that’s been zapped. Her friends gathered round as if to minister to her the way people do when an elderly woman slips on the ice in the middle of a busy street and her Sainsbury’s shopping bags spill all their contents. After  finally peeling herself off the front row she made it to the stage only to cling to Russell Crowe for what seemed an eternity. She then addressed her standing ovation with a beautiful open mouth from which, for a long time, no words emanated. As reactions go, it was epic. And what made it even better was that she got the audience weeping too. The Oscars sob-ometer that night was off the scale and it was awesome!

Related Topics:Awards Show Meltdowns
Up Next