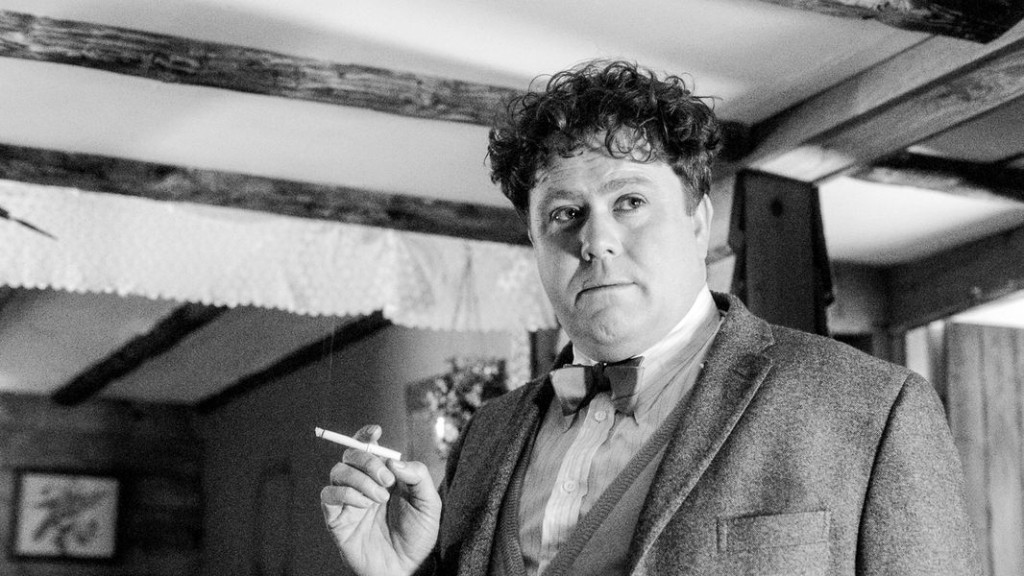 So, Dylan Thomas the renowned poet. A fellow Welshman yourself Celyn, just how familiar were you with Dylan’s body of work beforehand?

He’s our Shakespeare so pretty hard to ignore. I’ve been familiar and a fan of Dylan since a teenager. It was the first poetry that really got me excited and that I first got something from and when I saw the image of the man looking like a rock star or punk comedian I was sold, gravitating towards his work, the stories (apocryphal or not) and the man. ‘Under Milk Wood’ was instantly accessible with its humour and pathos just made sense to my young mind. But with this film I discovered more and more riches and like Shakespeare it takes on whole deeper meaning once spoken out loud. I’ve been preparing for this role for a long time sometimes consciously and sometimes not.

Firmly established as a character actor across the entertainment spectrum, were there any unlikely influences as you immersed yourself into the role of Dylan Thomas?

Apart from all the necessary Dylan research there is also an imaginative process that I relish as an actor. There isn’t any moving image of DT in an archive or recordings of his conversational voice, just his performance voice. So an imaginative process twinned with anecdotal and photographic evidence was my entry point. We talked about the fun and wittiness of Dylan being like the Odd Couple or Marx Bros as clowning is very influential to my process and because Andy Goddard is a huge music fan & film fan we would often pool our influences and inspirations into a reference pot of popular culture ‘it’s like that scene in that….’ or ‘that lyric from…’ lots of conversations like that. So a lot of influences going in and out. And then it’s about giving yourself over to your fellow actors to see what they bring out of you and this film has a role call of great talent and of course the chemistry between Elijah and I is one of the strongest influences in completing the character, Elijah is great. Andy Goddard had a fantastic grasp on what I can do or could do and conveyed that so deftly, we all trusted each other.

Of course you co-wrote the script with Andy Goddard, the film marking his directorial debut. Working on the likes of Downton Abbey and taking into account the aesthetic of the film, do you believe he proved an ideal fit?

Andy and I committed to each other and the film we wanted to make and its a relationship I’m very proud of. Andy is a punk film fanatic and music enthusiast who just happens to have directed Downton Abbey. He burst onto the film world with his shorts and , like me, then spent the majority of his career in TV. Those elements were essential for us to complete this film because in TV you are up against with time and budget and you have to solve problems and move fast so that experience worked for us. Also the crew who came on board with similar experience made us a well oiled machine. The TV and Film divide isn’t helpful as there is room for both and both can benefit from each other, while still being remaining brilliantly different.

The stylistics and values of the film at first look are deceiving of its modest budget. How would you describe your approach in achieving your admittedly audacious aims, considering such financial constraints?

It’s all about the talent. This film was shot in 18 days, in Swansea (pretending to be New York) and for a very modest budget. The fact it looks like millions of pounds is absolutely down to the talent who gravitated to the project and made it happen. Chris Seager’ masterful cinema photography , Edward Thomas’ genius design, the Amazing cast and all the other departments that brought their talent and ingenuity to make this work and be special. And then there’s Gruff Rhys and his incredible music score. But this is the film we had in our heads and dreams, we wouldn’t change a thing with the film… just maybe pay people more. Our producers Andy Evans & A J Riach (Mad as Birds Films) were essential in protecting this project and in supporting it to what it could be against all odds. What is a audacious is that this film was all our debut’ director, writers and producers.

A Middle-Earth veteran. Yet an underrated indie chameleon in the likes of Maniac and Grand Piano. How did you get Elijah Wood on board?

Seriously we finished writing the script with Elijah in mind, his agent read it and liked it and he read it and felt the same. So he met Andy in LA and then we Skyped and that was that. Lucky lucky us and I’m well aware it doesn’t and shouldn’t work that way. Andy G just saw the two of us together in his mind and on the screen. Elijah is a great man and fab actor, available and knowledgable with a great sense of humour too. He has an excellent instinct on set and you can see that directing a film is not took far away for him. He’s an Indie-film guy.

Dylan Thomas coming across as a tortured soul whilst John M. Brinnin sees him as this inspirational figure. From personal experience, have you ever had underwhelming encounters with your own ‘heroes’?

In a way it’s John’ fault for putting all that expectation onto Dylan. Yes people have disappointed me at times and I’m sure I’ve disappointed people but that’s just life. Saying that I do believe there is always a way with people and once you tune into each other there’s an understanding and with an understanding you can work together. I learnt that from my father who said ‘Treat other people the way you want to be treated and you won’t go far wrong’ , then working as a barman and then as a teacher it broadened my capacity to listen and engage with different personalities. And after all that and they’re still an arse….. give it to them straight and move on.

The business is a complex beast and follows no real structure or formality as it’s made up of too many parts that constantly change, a new universe with rogue atoms.

As an actor you put the world onto other people’ shoulders where your dreams and ambitions lie at the feet of strangers, that’s just crazy and no other professional would do that at the risk of their lifestyle and the lifestyle of their dependants. I’m not waiting for the phone anymore, if they call they call then that’s great and if they don’t…. well i’m dialling the numbers myself and saying ‘Want to make something together?’

Particularly in a beautifully played scene with ‘sharing’ of horror stories, the Thomas/Brinnin two-hander seems to thrive on pushing each other out of their ‘comfort zones’. Would you deem their relationship easy to define?

Thanks for saying that, Elijah and I worked really hard and Shirley Henderson and Kevin Eldon are just splendid actors. This sequence is the fire in the crucible of the film and it actually happened too. Andy and I discussed this sequence thoroughly and I have to credit Andy for the horror stories as they’re entirely him, beautifully performed by Elijah and Shirley. Re-relationships and their relationship I’d agree that yes it’s tricky to define as it is so new and they are so different, which makes compelling viewing and why we were drawn to tell the story. This film would not be a film had it been the smoothest of rides. As an actor I had the opportunity to throw everything into Dylan and at John and Elijah beautifully/skilfully dealt with the hurricane and hit it straight back to me.

Playing such an esteemed literary figure here. Is there anyone else of considerable stature you would relish portraying on-screen?

Maybe Hemingway in the literary world as he fascinates me and comedians intrigue me the way their minds work and hearts operate. I’m going to play a comedian at some point. You should find the monster in the man and the man in the monster. It’s the personalities i’m drawn to that excite me to play. Dylan is tragic and funny and brave and frustrating and vulnerable who is also a great artist, it was very personal to me and a gift to play.

I was chatting to a writer pal of mine today who’d seen the movie and was very moved and affected by it he said ‘Don’t forget what you did in this film and how you did that role because that’s the cream… when you put everything in and dare to fail’, he’s right. I’m so grateful that this is all happening now at this point in my life and not in my early 20’s, I’ve worked like a dog and been bitten enough to know I’m now ready. I’ve pulled back the green curtain and seen that it’s not a wizard at all, just a bloke like us who’s making it up as he goes along….. and i’m cool with that.

Thanks for supporting the film, c.

An Interview With… Andrew Hulme (Director, Snow in Paradise)